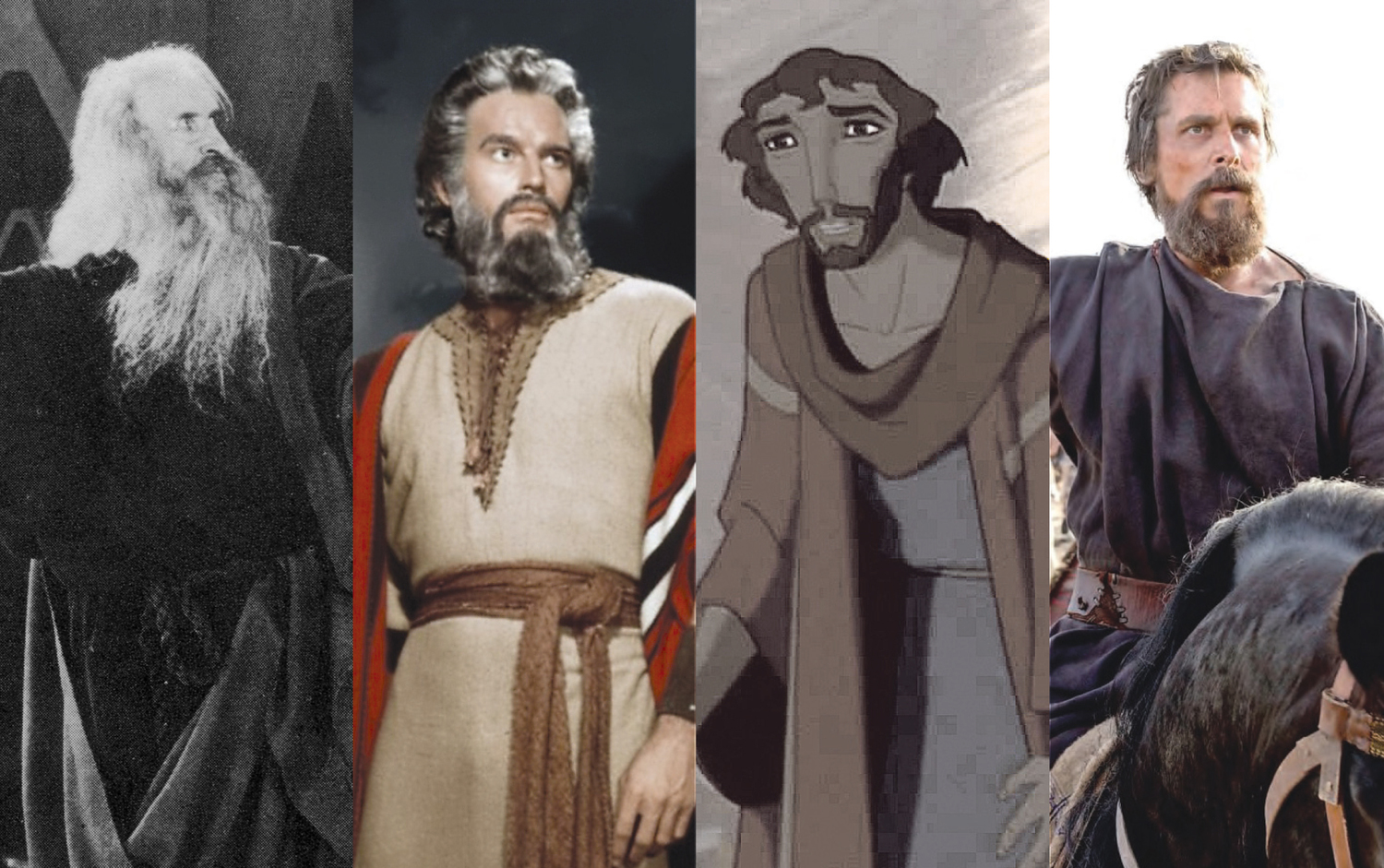 From left to right, Theodore Roberts in "The Ten Commandments" (1923), Charlton Heston in "The Ten Commandments" (1956), Moses voiced by Val Kilmer in "The Prince of Egypt" (1998), and Christian Bale in "Exodus: Gods and Kings" (2014). Credits (left to right): Paramount, Paramount, DreamWorks, 20th Century Fox. Photo illustration by Marshall Weiss. 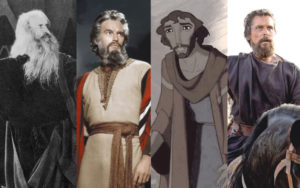 From left to right, Theodore Roberts in “The Ten Commandments” (1923), Charlton Heston in “The Ten Commandments” (1956), Moses voiced by Val Kilmer in “The Prince of Egypt” (1998), and Christian Bale in “Exodus: Gods and Kings” (2014). Credits (left to right): Paramount, Paramount, DreamWorks, 20th Century Fox. Photo illustration by Marshall Weiss.

Hollywood has had its share of big-budget biblical flops, but until now, the Exodus narrative has not been among them. Studios have brought Moses to the big screen sparingly, but in ways that defined the image and character of Moses for each generation of audiences.

In 1923, director Cecil B. DeMille left it to the American public to decide the subject of his next movie for Paramount.

DeMille received a letter from a mechanic who suggested he take on “The Ten Commandments.”

Despite opposition from studio executives who didn’t think audiences would connect with a Bible story, DeMille got the green light. For the role of Moses, he cast 61-year-old Theodore Roberts, a popular character actor present in most of DeMille’s previous films.

Roberts played the role with a down-to-earth charm, portraying an 80-year-old Moses on an important mission, but who is approachable at the same time.

On the Israelites’ journey out of Egypt, a child approaches him for a hug. When Moses sees the Israelites cavorting at the Golden Calf, his heartbreak is palpable.

Although the biblical story of Moses and the Israelites comprises only the 40-minute prologue to this feature film—set in then-modern 1923—the sequence resonated with silent film audiences of the day, and broke box office records.

Theatergoers flocked to it across America for more than a year.

It didn’t hurt that in 1922, news of Howard Carter’s discovery of Tutankhamun’s tomb and its cache of treasures created a frenzy in the American public for all things Egyptian.

But DeMille himself put forth another explanation for the subject’s significance.

Title cards at the opening of the film tell the audience: “Our modern world defined God as a ‘religious complex’ and laughed at the ‘Ten Commandments’ as old fashioned. Then, through the laughter, came the shattering thunder of the World War. And now a blood-drenched, bitter world—no longer laughing—cries for a way out.”

After years of receiving letters urging him to remake “The Ten Commandments” for the sound era, DeMille approached Paramount’s board in 1953 with the concept; they balked. Audiences, one board member said, wanted “modern, happy pictures.”

The 80-year-old Hungarian Jew raised his hand for silence and stood up.

“Well, I find it embarrassing and deplorable that it takes Cecil here—a gentile, no less—to remind us Jews of our heritage! What was World War II fought for anyway? We should get down on our knees and say ‘thank you’ that he wants to make a picture on the life of Moses.”

Charlton Heston was not DeMille’s first choice for the part. With the biblical image of an elderly Moses to lead the Exodus in mind, DeMille wanted 58-year-old William Boyd, who had worked with DeMille on earlier films.

In the 1950s, Boyd had achieved success as Hopalong Cassidy on television. He turned down DeMille’s offer, thinking it would interfere with his Hopalong image.

DeMille’s associates urged him to consider the 31-year-old Heston, showing DeMille Heston’s headshot next to images of Michelangelo’s sculpture of Moses.

Even with Heston secured, when DeMille’s crew began filming on location in Egypt in 1954, Boyd surprised everyone with a visit to the set—possibly DeMille’s version of a safety net during those first days in production.

It wasn’t lost on those who worked on the movie—particularly the young, Jewish composer of the film’s score, Elmer Bernstein—that DeMille was filming in a country that sought to destroy the new state of Israel.

Far from slow of speech and of slow tongue, Heston’s Moses is the great communicator of the story, almost not in need of Aaron (John Carradine) as his spokesman.

When Heston tells Yul Brynner, “Let my people go,” you can almost hear Ronald Reagan 30-some years later exhorting Mr. Gorbachev to “tear down this wall.”

It’s no accident. DeMille threw down the anti-Communist gauntlet in his “Ten Commandments” curtain speech, shown in theaters at the opening of the 1956 movie.

“The theme of this picture,” DeMille intones, “is whether men are to be ruled by God’s law or whether they are to be ruled by the whims of a dictator like Ramses. Are men the property of the state, or are they free souls under God? This same battle continues throughout the world today.”

In the script, Heston is given more than a few lofty monologues. Though this Moses is pained to know Egyptians will suffer in the plagues, he’s still more of a monument then a fully-fleshed person.

This does help Yvonne DeCarlo’s interpretation of Zipporah, Moses’s wife, when she utters, “I lost him when he found his God.”

Adjusted for inflation, DeMille’s 1956 “The Ten Commandments” remains one of the highest-grossing box office films of all time.

When Hollywood moguls Steven Spielberg, Jeffrey Katzenberg, and David Geffen formed their own studio, DreamWorks SKG, in 1994, they decided in short order to present their version of the Exodus narrative.

With Katzenberg’s expertise from The Walt Disney Company and songs written and composed by Stephen Schwartz, DreamWorks SKG released its animated feature musical “The Prince of Egypt” in 1998.

“The Prince of Egypt” is one of only two animated features not released by Disney to gross more than $100 million in the United States.

It continues on as a staple, shown to children at home and in religious school settings as an introduction to the Exodus.

The main characters—Moses, Ramses, Aaron, and Miriam—are depicted as decidedly young adults throughout, perhaps to resonate with a new generation and its children.

One appeal of the gorgeously animated film is the sense of wonder we often catch in the face of Moses, as voiced by Val Kilmer.

As with Heston’s Moses, Kilmer’s has a mind-altering revelation at the Burning Bush and from that moment, he’s all in.

Heston and Kilmer, each in his own time, provided the voice for God in their respective movies, following a Midrash (rabbinic commentary) that God spoke to Moses in a voice that would be familiar and comfortable to him.

For an age of anxiety

In this script, the Israelite God pretty much keeps Moses in the dark on how all will move forward, except to ask Moses to be God’s general.

A former military leader in Egypt’s army, this Moses relies on his wartime skills to rally the Israelites into the beginnings of revolt, a small-scale war of attrition.

When that doesn’t work, God tells the now Robin Hood-like Moses, “for now, you can watch.” God then takes charge.

Scott brings a knack for conveying the ancient world as a pretty rough neighborhood.

But this Moses doesn’t get a sense of where it’s all heading; that doesn’t leave much room for the audience to follow.

Will theatergoers anoint Bale as this generation’s Moses? The answer is as hard to decipher as a message in “Exodus: Gods and Kings.”

his story was originally published by The Dayton Jewish Observer.