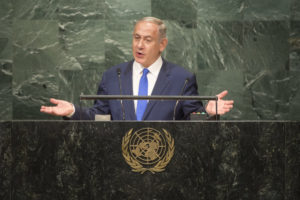 “Outraged by expressions of anti-Semitism, neo-Nazism and racism. Everyone should oppose this hatred,” Netanyahu tweeted Tuesday.

Netanyahu’s condemnation of the rally came after other Israeli politicians slammed the demonstration earlier this week, including Education Minister Naftali Bennett, who said, “Flags and symbols that go unobstructed in the United States not only harm the Jewish community and other minorities, but humiliate the millions of American soldiers who paid with their lives to protect the U.S. and the entire world from the Nazis.”

At the rally, a 32-year-old woman was killed and 19 were injured when Ohio resident James Alex Fields Jr., 20, rammed his vehicle into a crowd of counter-protesters.

In the wake of the incident, President Donald Trump denounced “hatred, bigotry and violence on many sides,” but was criticized for omitting an explicit condemnation of the white supremacist groups.