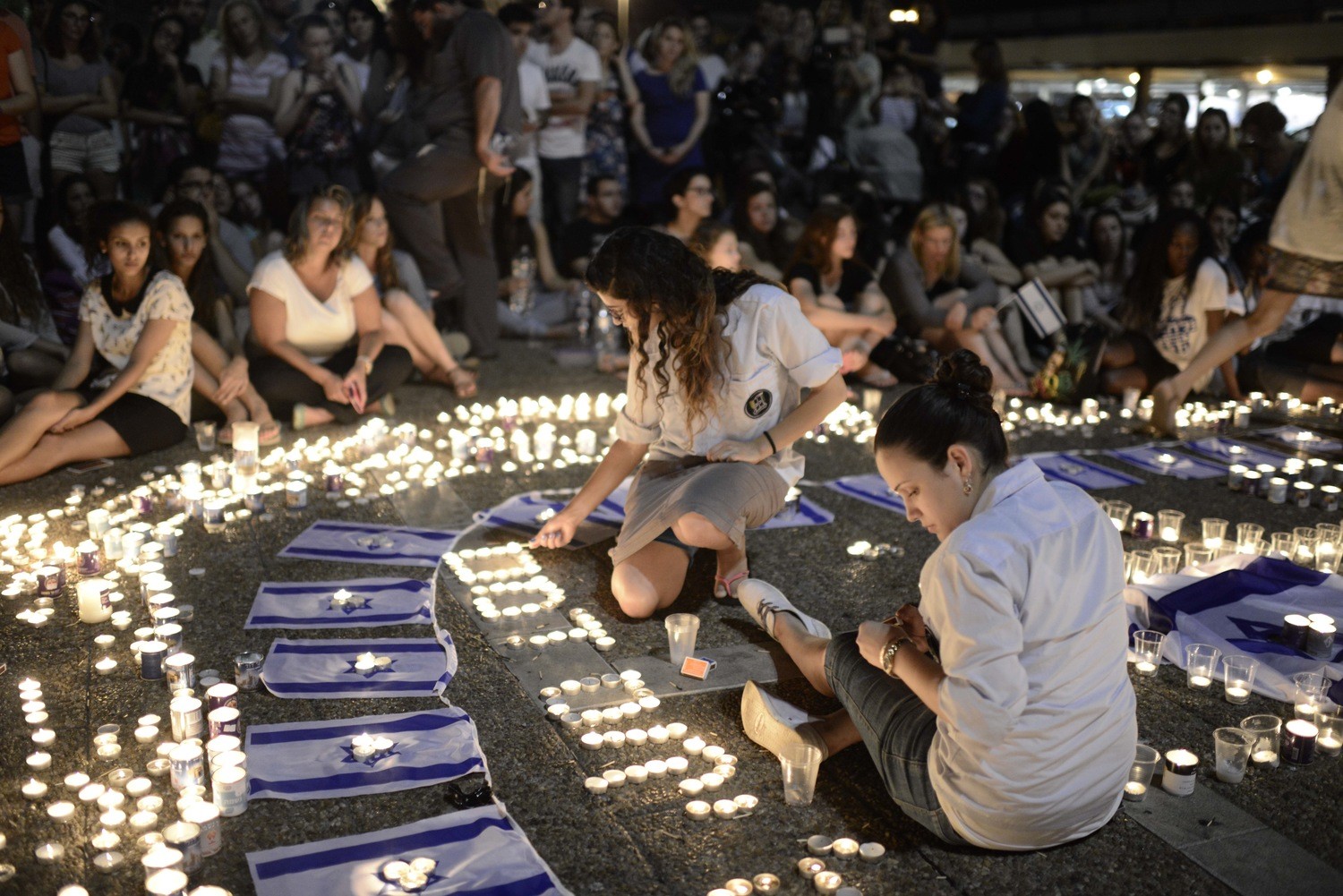 Israelis light candles in Tel Aviv's Rabin Square on Monday as they mourn the news of the death of three abducted Jewish teenagers. Israeli forces found the bodies of the three missing teenagers on Monday after a nearly three-week-long search. Credit: Tomer Neuberg/Flash90. 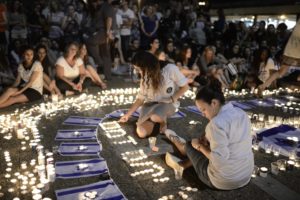 Israelis light candles in Tel Aviv’s Rabin Square on Monday as they mourn the news of the death of three abducted Jewish teenagers. Israeli forces found the bodies of the three missing teenagers on Monday after a nearly three-week-long search. Credit: Tomer Neuberg/Flash90.

The citizens of Israel were shocked and saddened on Monday when news emerged that the bodies of the three Israeli teenagers who were kidnapped on June 12 were discovered in a field west of Halhul, near Hebron.

The funerals of Gilad Shaar and U.S.-Israeli national Naftali Frenkel, both 16, and Eyal Yifrach, 19, were held Tuesday. Though the three did not live in the same town, they were buried side by side in the city of Modiin.

The kidnapping appalled Israelis who rallied behind the youngsters’ families in a display of national unity. The teens had apparently been shot soon after being abducted, while still in the kidnappers’ car, officials said.

Israel has accused two Hamas terrorists—Amer Abu Aysha and Marwan Kawasme—of carrying out the abductions, and the suspects are still at large. Israeli media said the break in the case, which led to the discovery of the bodies, came after the suspects’ relatives were interrogated.

Soldiers from the Israel Defense Forces’ (IDF) elite Maglan special-forces unit and the Kfir infantry brigade, as well as civilian volunteers, discovered the dead bodies in their search on Monday. The search’s focus on the specific area where the bodies were found was based on intelligence information gathered by the Shin Bet security agency. Also, a pair of glasses belonging to Yifrach was found nearby in recent days.

After the bodies were discovered, IDF Chief of Staff Lt. Gen. Benny Gantz arrived at the scene for a situational assessment with GOC Central Command Maj. Gen. Nitzan Alon and Coordinator of Government Activities in the Territories Maj. Gen. Yoav Mordechai.

The field is a 15-minute drive away from Alon Shvut Junction in Gush Etzion, where the teens were kidnapped on June 12.

The condition of the bodies indicated that the teens were killed shortly after being kidnapped. Experts suggested that at least one of the boys put up a fight, according to evidence on the body. One of the teens was able to call the police before they were murdered.

After being pulled out of the ground, the bodies underwent forensic testing. The families of the teens were notified even before the final identifications were made. The Israeli Defense Ministry quickly announced that it recognized the three murdered teens as victims of terror.

Israeli defense officials said that Operation Brother’s Keeper—Israel’s response to the kidnapping—has not come to an end, as the suspects have not been caught. Defense officials believe the suspects are still in Judea and Samaria, but have gone “completely off the radar.” The Israeli Shin Bet security agency said it was continuing its “intelligence and operational efforts to find all those involved in the attack.”

“The mission isn’t over,” said the IDF’s Gantz. “We are halfway there. The intelligence and operation effort put into finding the kidnapped boys will be redirected toward finding the kidnappers. The IDF will work on every level to capture them in the shortest possible time.”

Israel Prime Minister Benjamin Netanyahu convened his diplomatic-security cabinet in Jerusalem on Monday night to discuss courses of action in response to the discovery of the boys’ bodies.

“On behalf of the entire Jewish people, I would like to tell the dear families—the mothers, fathers, grandmothers and grandfathers, and brothers and sisters—we are deeply saddened,” said Netanyahu. “The entire nation weeps with you.”

“Hamas is responsible—and Hamas will pay,” he added.

Deputy Minister in the Prime Minister’s Office Ofir Akunis (Likud) said as he left a meeting with U.N. Deputy Secretary-General Jan Eliasson, “An entire nation has stood as one and prayed for good news, but this time our prayers were in vain.”

“We have one obligation—to wipe out Hamas,” Akunis said. “It’s a degenerate, murderous terrorist organization that sees murdering kids as a legitimate move. So there is only one response: crush them immediately. My heart is with the families, may we know no more sorrow.”

Upon hearing the news that the teens’ bodies were found, Akunis told Eliasson that the tragedy is “the result of [PA President Mahmoud] Abbas setting up a terror government, which the world welcomed,” referring to the recent formation of a unity government between Hamas and Abbas’s Fatah party.

Deputy Religious Services Minister Eli Ben-Dahan (Habayit Hayehudi) said he urged the Israeli cabinet to punish the killers’ families “in the harshest possible way, so nothing like this happens again.”

“We need to deport the murderers’ families, raze their homes, and prevent them from rebuilding,” he said.

President-elect of Israel Reuven Rivlin said, “What we were afraid of has come to pass. Our fear was heavy, but in our hearts we had great hope that even the murderous terrorism would spare our boys. … Our hearts are with the brave families at this difficult time. They will always symbolize heroism and belief in the hardest hours.”

Economy and Trade Minister Naftali Bennett (Habayit Hayehudi) said that there would be “no forgiving the murderers of our children and the ones who sent them.” Knesset Speaker Yuli Edelstein (Likud) stressed that Israel must undertake an “uncompromising war against terrorism in general and against Hamas specifically.”

“It’s time that the Palestinians also understand that Hamas is leading them astray and boot them out of the Palestinian leadership and from their society,” Edelstein said.

Israeli Opposition Leader Isaac Herzog (Labor) said there is “no human explanation or justification” for the kidnapping and murder of the boys.

“I’m convinced that the long arm of the [Israeli] security forces will reach the killers,” he said. “We have known horrible, painful terror attacks and overcome them, and that’s how it will be this time. That’s life in this country.”