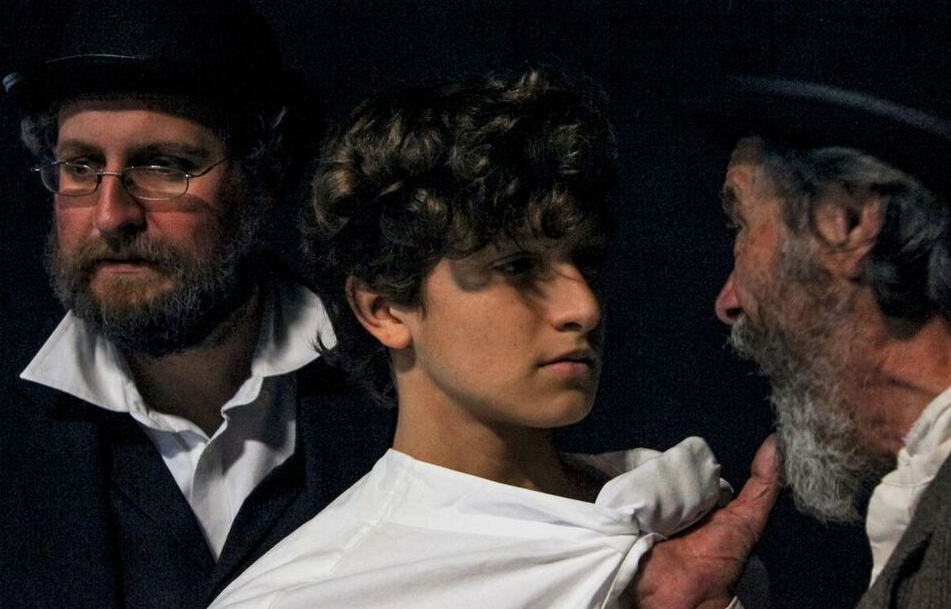 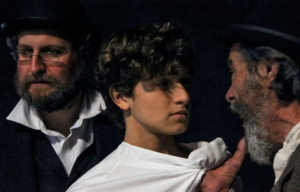 Aimee Greenberg is totally fine with waiting. As an actor, writer, director and a veteran theatre artist whose work has been produced in Europe, Asia and the United States, she knows it comes with the territory. Waiting is a central theme in most people’s lives, but never so predominant as in Samuel Beckett’s masterpiece Waiting for Godot, where two men wait endlessly for the arrival of a third. Godot has been produced numerous times and in numerous languages, most recently on Broadway starring Ian McKellen and Patrick Stewart.

And now Greenberg, who founded fruitlessmoon theatreworks in 2013, brings Waiting for Godot to San Diego, March 25-April 10 at the White Box Live Arts space within NTC at Liberty Station.

“What is really challenging and exhilarating and demanding of this play, especially directing it,” Greenberg says, “is it’s like walking a tight rope, constantly, between extremes … pathos and humor, despair and redemption, poetry and concise language.”

Greenberg, who wrote Light Falling Down, a piece inspired by stories of women Holocaust survivors and (presented at Oceanside Theatre Company); acted, directed and co-produced Occupy the Rice Fields (an original piece about Greenberg’s experience in Bali presented at Space 4 Art and North Coast Rep); and directed and produced A Midsummer Night’s Dream in Zoro Garden, Balboa Park; is not afraid of taking on that challenge.

“Godot is not realistic, the text is all-important, and the stage directions are very concise and very efficient,” she says. “Unlike other plays where you ignore the original stage directions from the first production in order to ‘craft your own’ performance; Beckett’s directions are part of the text or score as it were. The moment you start looking at [Waiting for Godot] as a moment-to-moment realistic play, you’re dead in the water.”

After surviving World War II in the French resistance, Beckett wrote Godot, pulling from his personal experience in a world similar to our own, Greenberg says.

“We have terrorism, global dissent, we have a serious refugee problem [today]; there are horrors of today that this play speaks to,” she says, noting that this isn’t the first time Waiting for Godot has traveled to countries where genocide or disaster was prevalent. In 1993, American writer and political activist Susan Sontag produced Godot in civil war-riddled Sarajevo, and more recently, the work was produced in New Orleans post-Hurricane Katrina starring two African-American actors in the title roles. Godot was even produced in California’s San Quentin State Prison to prisoners who, for obvious reasons, could sympathize with the characters’ endless waiting.

“I would love to do this in Israel,” Greenberg says. “We’ve been waiting for peace since the inception of the country. We never meet Godot, but is Godot peace?”

Whoever Godot is for Greenberg, it doesn’t truly matter.

“Becket denied that [Godot] was God; he didn’t want to talk about it … for me it’s a personal symbol … some sort of spiritual entity … the fact that everybody waits in their life … we’re always in a state of waiting, of stasis.”

Fortunately, San Diego audiences will not have to wait much longer for Greenberg’s production of Godot. She has cast an amazing group of local actors: Joe Powers as Estragon; Tom Steward as Vladimir; Fred Harlow as Pozzo; Don Loper as Lucky and Jordi Bertran as the Boy; to bring the timeless tale to life this month.

Waiting for Godot is categorized as an absurdist comi-drama. Even though the Beckett estate requires producers to abide by the text, including stage directions, Greenberg states that she has given liberty to her actors to truly encompass themselves in these cherished characters as she hopes to honor the Nobel Prize-winning playwright’s work, saying, “This play is such a conundrum, and just when you think you’ve nailed it, the text takes a U-turn.”

Tickets are available at godot.eventbrite.com or at the door.