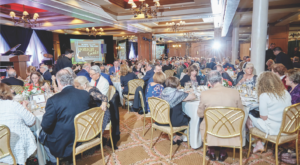 I first discovered North Coast Repertory Theater in 2000, the very same year I got divorced. After attending a show, I read in the program that they were looking for help with a set strike the following Sunday. I arrived at 2 p.m. and was given a ball-peen hammer and the direction, “See that wardrobe structure? It has to fit into that dumpster. Go!” Great therapy for an angry woman who was looking for an outlet. But that was just the beginning of my love affair with this very intimate, incredibly special theater. I encourage you to come to NCR’s Spotlight Gala to see just what I’m talking about.

In 2003, David Ellenstein came on board as the Artistic Director. He has grown the theater in so many tangible and critical ways. Every season Ellenstein elevates his audiences’ artistic appreciation by introducing some groundbreaking world premieres and employs actors of the highest caliber to perform in this cozy platform. Of course, the seven mainstage productions offer something to suit everyone’s taste buds, but I love that Ellenstein challenges people to move just a tad beyond their comfort zone to be moved and provoked.

I spoke with the Artistic Director about the upcoming Spotlight Gala which will feature his friend, and Academy Award winner Richard Dreyfuss and wife Svetlana, who will be serving as Honorary Chairs. In addition to these standouts, the theater will be honoring champions of the arts, Julie and Jay Sarno, and the event is chaired by Laura Applegate and Co-chairs Sarah King and Martin Davis. There is an additional throng of volunteers and other committee members who will make the event magical.

Ellenstein told me that he is excited about the high quality of acting in the plays chosen for this season. Despite the small size of the theater, he has succeeded in attracting actors from Los Angeles and New York.

When Ellenstein was asked what NCRT offers that sets it apart from other local area theaters he shared that, “the enormous talent of the actors rivals that of the Globe or La Jolla Playhouse but NCRT has the added bonus of being a more intimate setting. Every audience member is up close and personal.”

With this intimate space come challenges. When I asked David about his biggest hurdle, he noted that the “lack of backstage, no green room” and in general, the small space of the physical plant is somewhat problematic. While Ellenstein would love to see the theater expand in size, he is determined to keep the setting intimate, no more than 350 seats in the audience.

Having an amazing staff and crew who’ve been committed to the project long-term goes a long way toward making North Coast Rep the sensational place it is. Award-winning set designer, Marty Burnett, has completed his 200th consecutive set at this theater. He has won awards and accolades for his creativity and ingenuity. The stage manager, Aaron Rumley, and Patron Services Director, Jeff Needham, have been with the venue since 2003. This degree of dedication is unusual in the theater environment but proves that North Coast Rep is sensitive to each staff member and strives to reward them, and treat them with dignity and value.

Though Ellenstein couldn’t share specifics about the upcoming season (yet another reason to attend the Gala) I did learn that he is anticipating a great season of high caliber actors performing a broad range of shows including two classics, and a world premiere among others. The current season’s shows feature two political comedies that Ellenstein says are both very clever and quite distinct from each other. The Homecoming, Human Error, Forbidden Broadway and a host of off-night events are some of the many reasons to attend North Coast Rep. Additionally, the Youth Theater, under Ben Cole’s direction, produces five shows and a thriving summer camp for teens.

Julie and Jay Sarno also have a long history with NCR. Jay shared that he’d first attended a show at the venue when a friend gave him a ticket, in the old space in 1982. An electrical engineer by training, Jay noted several issues that the fire department would frown upon, so he offered his expertise and has been helping with technical things ever since. He later joined the Board, and later still, served as Board President. Julie was working as Director of Development for the theater when Olive Blackstone asked her to join the Board. Julie and Jay worked together on Board matters, and eventually found they shared more than a love for the arts and local theaters. The Sarnos were married on stage at North Coast Rep in April of 1989. Jay reported that it “wasn’t a sellout,” but that the setting was perfect for the “inherently theatrical occasion.”

The two are active patrons of the arts all over San Diego county. Both concurred that what sets NCR apart from many other area theaters is its professionalism. Julie proved this by saying that when you watch actors in a small space, “Richard Baird can’t fake it.” Jay averred that a fiscally sound Board ensures hiring full equity actors, and having the ability to support artists as the professionals they are. This, in turn, enhances the reputation of the theater and the community’s respect for the institution.

The Sarnos have lent their many talents to improving the theater and supporting the actors in a variety of ways. Jay helped the theater to achieve and sustain financial stability. In 2014, new LED lighting was installed which was not only cost-effective but produced less heat for the actors. These changes are critical. So too, is the care of the cast. Every tech week, the Sarnos provide dinner at their home for the hard-working actors and crew. They have been doing this over the past ten years, whether it is a one-man show or the 28 members of A Christmas Carol.

The Fairmont Grand Del Mar, a premier venue, will be the scene for North Coast repertory Theater’s Spotlight Gala, March 22. Over 200 guests will be treated to “non-stop laughs and toe-tapping Broadway show tunes from Gypsy, Cabaret, Sweet Charity, Forum and other well-loved shows”. The fun will be complemented by fine food and wine, live and silent auctions and promises to be an evening of delights. Don’t miss out on this special evening. Get your tickets today at rick@northcoastrep.org or by calling (858) 481-2155, ext.224.