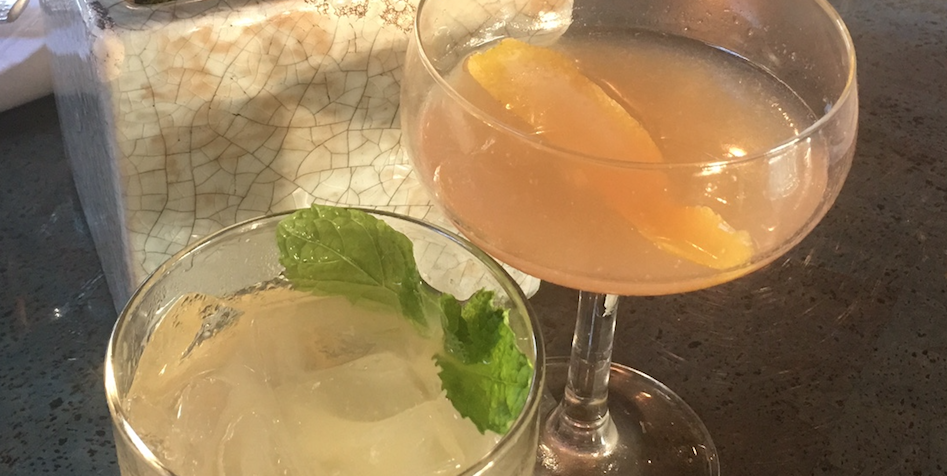 The year was 1915 and the Assistant Secretary of the Navy strolled around an unused piece of land in San Diego, CA. The Secretary looked around and saw a vision for a new naval training center in the heart of the city. This secretary went on to become the 32nd President of the United States and led us through one of the bloodiest conflicts this nation has ever faced. His name was Franklin D. Roosevelt. Fast-forward eight decades as the Navy began looking elsewhere for their training center and Liberty Station, the retail and gastronomic haven we now know it as, was born. Today you’re more likely to run into scrambling toddlers rather than cadets in formation.

Nestled in the middle of Liberty Station is a new culinary adventure named Fire Side by the Patio. Chef Antonio Friscia states on their website that the restaurant is “A wood fire and charcoal-driven menu rooted in generations of technique and tradition inspired by flavors of Argentina, Italy, Mexico, Japan and Thailand.” It is also one of the restaurants by San Diego developer extraordinaire, Gina Champion-Cain, who brought the House of Blues to San Diego in 2005. Other restaurants in the group include the Patio on Lamont Street and the Patio on Goldfinch. Champion-Cain is quickly developing a lifestyle brand in San Diego, with a hospitality company, LuvSurf, to go along with the great food at her restaurants. If you haven’t been to one of her patios, you are missing a true treat. Here, we visited her latest culinary venture, to give you a taste of what Fire Side is all about.

I believe in full transparency, so this was not my first venture into Fire Side. A couple months prior I enjoyed a happy hour there on the recommendation of a fellow co-worker. The first thing you’ll notice about Fire Side is that it reaches the olfactory senses of your brain immediately after parking your car.

During my first trip to the restaurant, I sat outside on the patio, which is a great venue to indulge in a relaxing cocktail and soak up the San Diego sun. This time, I sat inside. The interior of the restaurant is beautiful. Concrete floors, Edison bulbs, metal finishings and a large upside down lit up tree make the space feel modern and unique, but I will say that the outside patio is definitely the better attended of the spaces here.

Our server for the evening, Garyt, was not only knowledgeable about his menu, he was proud of it. He knew exactly what to recommend from start to finish, and when you have a party who just says, bring me what you would eat here, it can be a little daunting. I felt completely at ease with Garyt’s confidence and knew he was up for the challenge.

It was amazing. As a diehard old fashioned drinker, I sometimes feel mixologists make them a little too bitter, yet the Scofflaw was a perfect balance of old fashioned with noticeable fruit notes due to its homemade pomegranate grenadine. Garyt let me know that they chose to use dry vermouth instead of the typical sweet. It was a new old fashioned, and I highly recommend it.

The menu is vast. Luckily, Garyt was there to offer his recommendations.

The first dish offered to us were the mussels, which Garyt stated many people bypass because; well, how much better can you make a bucket of mussels? Well, Fire Side has. And the key is in two ingredients: wood fired tomatoes and beer. While normally mussels are served cooked in white wine, Pabst Blue Ribbon is the secret ingredient in this dish. And let me tell you folks, it freaking rocks! Fire Side does the history of this simple dish justice, but by changing one key ingredient, makes it all their own. If you eat mussels, order it.

So if we started with something French, it only makes sense to take a trip from Paris to Tokyo, and sample some yakitori. Fire Side offered nine yakitori the day we went, and availability of each type is always subject to change.

We received the steak skewer first and I was impressed with its simplicity. This was the only dish of the night where I truly thought to myself I could do this at home. The meat was incredibly tender, yet for eight dollars, I would have preferred to try something a little more daring. The elk meatball conatins pork, so if you keep kosher, this is not for you. For everyone else: you’d swear you’re eating an amazing Italian meatball with a Japanese flair. The little side of marinated cucumber (sunonomo) was also a pleasant surprise and cleansed the palate perfectly.

For its chalkboard menu, customers have their choice of one of three meats cooked entirely for 12 hours in Fire Side’s on-site charcoal pits. We were lucky enough to taste all three.

Served on parchment paper and a plain white piece of bread (like it’s supposed to be), the three mounds of meat sat on a plate waiting to be devoured. As the non-kosher Guinea pig, I will say that the pork was fantastic and reminded me, oddly enough, of great Chinese BBQ pork. The smoke ring was there and it had a light glaze, which made it all come together at the end.

The tri-tip, extremely popular in the San Diego area due to its use in local restaurants, was extremely flavorful. It had just the right amount of chew and was cooked to perfection, mid-rare (if you like your meat well done, please stop reading this article right now, and go to your time out corner). But the winner of the trio by far had to be the brisket. Now I know many of our readers will claim that their Bubbe makes the best brisket, but with all due respect to grandma, it probably is dry. This brisket is phenomenal. It truly breaks apart with a fork and for a price at around $12 bucks, is completely worth it.

The best part about the chalkboard menu was its simplicity. It’s meat, it’s smoked, it’s good. No need for overbearing sauces or spices that just don’t need to be there. It’s just pure, like apple pie and rock music.

This is one of the best things on Fire Side’s menu. The smoked trout is exquisite and compliments the salad perfectly. For me, the star of this dish is the texture of the quinoa, and I still cannot figure out how the chef made it so crunchy and delicious.

You’ll find French pressed coffee all over Fire Side. Along with the coffee, I split the carrot cake, which was a perfect way to end the evening. It was moist and iced just right,and much like the entire meal, it was simple yet pleasing.

Look, we’re not here to reinvent the culinary wheel. You can put a chemistry set on a plate and serve it to me bubbling in CO2, but that’s not going to get my butt in the seat again and again. Those are parlor tricks and they tend to fizzle out. When I go to a hearty restaurant I want to be fulfilled in what it promises to provide and Fire Side does this in spades. It’s a beautiful restaurant located in a perfect location filled with pride and the history of this amazing city I call home. But Fire Side is much more than that, its simplicity wrapped in good ol’ fashioned Americana. It’s the tastes we know, the tastes we long for, the tastes we love. It’s the smoke and the salt and the bark of a good meat. It’s a good cocktail and amazing appetizers.