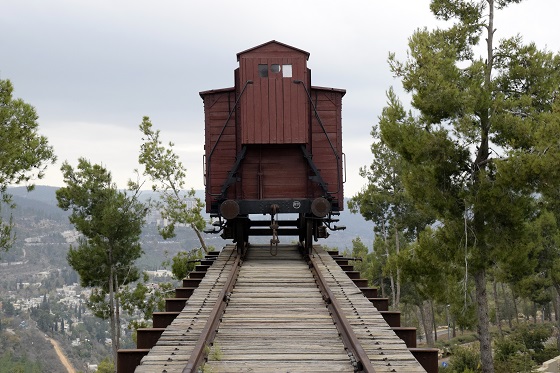 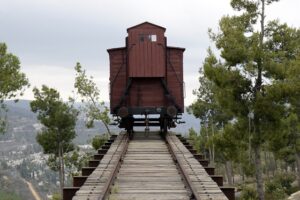 On Mount Herzl in Israel, a monument which looks a bit like a broken home commemorates 167 Holocaust survivors who died fighting for Israel’s right to exist. These men and women had lost everything. With no family left, they fought for Israel’s independence knowing that if they themselves did not survive this fight, there would no longer be a living trace of their families. They are called the Last of Kin.

On a warm spring day, I am leading a tour that starts in the Valley of the Communities at Yad Vashem. In this 2.5 acre monument dug out of the natural bedrock, the Jewish communities that were destroyed in the Holocaust are commemorated. The Holocaust changed not only the face of Europe, it changed forever the Jewish world. We will be walking from here to the Monument to the Last of Kin on Mount Herzl. This path represents the length and breadth of Israeli memory.

Leaving the Valley of Communities, we leave behind the Jewish communities of Europe. As we climb up the Mount of Remembrance, we pass a cattle car on a train track to nowhere. The car pierces through the Jerusalem mountains, coming to its final resting place in this quiet spot after carrying countless Jews to their death or forced labor.

We continue to Uprising Square and Natan Rappaport’s Warsaw Ghetto Uprising monument. It is nearly identical to the one in Warsaw, except that this monument has two images side by side. A sculpture depicting the hardship of the ghetto is connected to the uprising sculpture with the words of the prophet Ezekiel: “In thy blood, live.”

Adam Halperin was born in Warsaw Poland. As a boy, he joined the Revisionist Zionist youth movement, Beitar. When the Nazis invade Poland, Adam was sent to the Warsaw Ghetto. In the ghetto, Adam was one of the founders of Żydowski Związek Wojskowy or ZZW, the Revisionist underground movement. On April 20, 1943, the second day of the uprising, Adam took a post in Marovska Street. Within hours, he was captured by the Germans and sent to Treblinka in a cattle car just like the one we passed earlier. Adam jumped off the train and escaped into a forest where he joined a group of Jewish Partisans. But this is not the end of Adam’s story. We will meet Adam again on this tour.

As we leave the Uprising Square, heading towards the great iron gates of Yad Vashem, we transition from Europe to Israel, walking through the gate and turning towards the path that will lead us up to Mount Herzl. The path we are going to walk was constructed by hand by members of Israeli Youth movements, connecting the two parts of the Remembrance Mountain: Yad Vashem, the memorial to the Holocaust, and Mount Herzl, the memorial to Israel’s defenders.

Along the path, we pass panels that describe the events in “Yeshuv” (Israel) during the war years. Photos and text depict snapshots of the main events of the struggle to end British rule, including the bombing of the Allenby bridge and the building of new towns. We climb up the mountain, walking the path of Israeli history.

While Europe was at war, in the Yeshuv a new chapter was beginning. Three Jewish organizations – Hagana, Etzel and Lechi – struggled against British rule. One of the main avenues of resistance was a campaign of illegal immigration, “Ha’apala.” This campaign of bringing as many Jews to the Holy Land and away from burning Europe continued until after the state was founded in 1949.

The first large monument that we see on the path is for the ship Salvador. The monument is a stone shaped a bit like the side of a boat, engraved with the names of the people who drowned in the Mediterranean Sea trying to reach the Holy Land.

Salvador left the coast of Varna, Bulgaria in 1940 with 352 Jews escaping the war. The old ship made it to the port of Istanbul. After five days in port, the ship went out to sea again, only to be hit by a storm. Salvador fell apart and 238 Jews drowned. The survivors managed to swim back to safety. Eighty of the survivors returned to Bulgaria and managed to come to Israel in 1941, just before Bulgaria was overtaken by the Nazis and Jews could no longer leave. The remaining survivors stayed in Turkey.

At the same time, the Jews in Mandatory Palestine were training 110 volunteers assigned to parachute into Europe to collect and extract intelligence as well assist Allied air forces on the ground in Europe. In 1944, 37 Jews parachuted into Europe. Seven of them were captured by the Germans and executed. Their remains were returned to Israel only after the state was founded. Continuing up the mountain, we pass their burial site, seven graves positioned to represent a parachute.

On May 8, 1945, the war ended. Europe was filled with refugees. Many of the liberated Jews tried to find any possible way to get to the land of Israel. Our friend Adam Halperin was a member of one of the groups helping Jewish refugees leave Europe. He himself came to Israel before the state was founded.

Benny Berla was one of the refugees trying to leave Europe. He tried to come to Israel on a boat, illegally. British Officers stopped the boat from entering the shores of Israel. All the Jewish refugees were sent to a detention camp in Cyprus. Benny, who was born in Poland, survived the horrors of the Holocaust, survived ghettos, labor camps, and concentration camps. After all these horrors, he was alone in the detention camp in Cyprus. None of his family survived.

In 1948, during Israel’s War for Independence, the detention camps in Cyprus were liberated. The camp’s inhabitants finally entered Israel. Benny immediately joined the war. Benny and his military unit fought bravely trying to open the roads to Jerusalem. In April 1948, Benny’s unit was instructed to take the Monastery of St. Simon in Jerusalem. The fighting over the monastery was hard, but after three days, on May 1st, the monastery was in Israeli hands. On that day, Benny Berla died fighting for the independence of the state of Israel. He was 25. He was the last of his kin.

On the path, between Yad Vashem and Mount Herzl in Israel, there is a small round rock commemorating the Last of Kin. Hebrew letters engraved on the rock read, “The house that was – is gone. The house that could be built here – will not. They were the last kin and they are gone.” It is a preview of the monument we have come to see.

As we arrive on Mount Herzl, at the end of our tour, we stand before the stone in the shape of a broken home that lists the names of the 167 Last of Kin. They came to Israel as the last surviving member of their family and fought for Israel’s right to exist. They knew that with their death, their family’s legacy would be an independent Israel. Their sacrifice is part of the legacy and history and fabric of Israel. As we walk among their graves in the cemetery on Mount Herzl, we are reminded of all that the Jewish people lost in the Holocust and during the fight for independence, and of all that we gained through the hard work and sacrifice of many.

Lynne Feldman is an MA student and PhD candidate in Holocaust research at Haifa University Israel. She is a teacher, A Yad Vashem-trained educational guide, and the International Coordinator at Teach the Shoah. Teach the Shoah is an international storytelling cooperative dedicated to ensuring that the story of the Holocaust lives beyond the survivors.