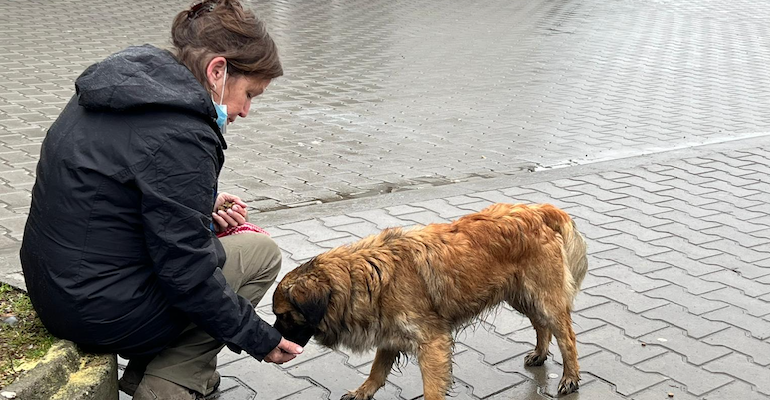 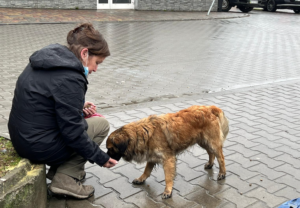 Jewish San Diegans have been involved in providing humanitarian services to Ukrainian refugees almost every step of their frightened journeys. They have helped Ukrainians get to safety across the border of their war-torn country. They have made sure that the refugees and their pets were healthy enough to continue their journeys after exiting Ukraine. And, they have assisted Ukrainians and disaffected Russians who crossed into the United States from Mexico to find temporary shelter in San Diego en route to their ultimate American destinations.

Additionally, such organizations as the Jewish Federation of San Diego County and the Jewish Community Foundation are sending money onto international partners to help pay for food, supplies, and other necessities for some of the millions of people who have been displaced by the war launched against Ukraine by the Russian government of Vladimir Putin. As of mid-April the Jewish Community Foundation had directed $3.1 million in grants to 55 different organizations supporting the Ukrainian relief effort, according to Ollie Benn, the Foundation’s philanthropy director. On April 25, the Jewish Federation of San Diego County reported it had raised $528,400 in support of Ukraine relief efforts.

There appeared to be nearly universal sympathy in the Jewish community for the Ukrainian people led by their Jewish president Volodomyr Zelensky.

Getting Ukrainians under attack to safety across the border has been one of the priorities of the Leichtag Foundation since war seemed inevitable. Charlene Seidle, Leichtag’s executive vice president, told a reporter for eJewish Philanthropy, that the Encinitas-based Jewish philanthropy has donated hundreds of thousands of dollars for relief efforts in the Ukraine, “getting people fed, getting supplies in, getting people out.” The funds finance an informal, ad hoc network of community organizers and relief workers in Ukraine and neighboring pro-western Eastern European countries.

Although the network is informal, Seidle said, she knows the contributions are being put to good use because they are going to people that Leichtag Foundation employees either know personally or who have been otherwise vouched for.

When “you know 50 people are evacuated because of a bus you paid for, and they have been saved, that is very, very meaningful and rewarding,” Seidle added in the eJewish Philanthropy interview. “At the end of the day, we’re in a disaster situation. Everyone has to make decisions in a split second, and you do the best you can in a limited amount of time. … We take calculated risks.”

Once Ukrainians get across the Polish border, they find a network of medical and humanitarian organizations ready to assist to their many needs. Ten Hadassah groups in San Diego County and southern Riverside County help to support the Hadassah Medical Organization’s Humanitarian Mission which sends medical personnel in yellow vests to refugee centers, hostels, and private homes in Poland to assess the conditions of Ukrainian refugees and to provide medical care when needed.

Gary Weitzman, president and CEO of the San Diego Humane Society, flew to Przemsysl, Poland, on the Ukrainian border, where he helped staff a tent operated by the International Fund for Animal Welfare (IFAW) where the pets brought across the border by Ukrainian refugees were examined and tended to. “My family, generations ago, were from the Ukraine,” Weitzman said. During a stay of nearly a week, the Jewish veterinarian examined “probably a few hundred pets. They didn’t all need medical care. It was really to check on them and reassure people that they were okay, and then to make sure that people had supplies for them,” Weitzman told L’Chaim Magazine. “We were as much a vet clinic as a free pet store, which is important because we don’t want people to lose animals when they have lost everything else in their lives.”

Weitzman said his primary goals were to assess the animal welfare situation and to determine what level of help his organization could render in the future, either along the border or within Ukraine proper. “We are hoping and praying that this will end successfully for Ukraine and if that happens and things are normalized a little bit then that country is going to need so much support on every level for every category. We hope to be able to support financially the shelters that are in Ukraine and the veterinarians there who have lost everything.”

After reaching Poland, many refugees travel by bus or train to Warsaw where they make international airline connections to cities around the world. Some fly to Mexico City and thence to Tijuana, where they join the flow of displaced persons from countries in Central America, Africa, and Asia who are hoping to find refuge in the United States.

Persons fleeing war may be legally admitted to the United States by applying in third countries at American consulates and embassies for official refugee status. Or they may present themselves at the U.S. border as candidates for asylum. They may be accepted as one-year temporary residents on humanitarian grounds. Under a policy to expedite admission of Ukrainian refugees announced April 21 by President Joe Biden, they may fly to any airport in the United States after temporary two-year sponsorships have been arranged.

That was good news for some Ukrainian refugees, but bad news for those who had made their way to Tijuana, Mexico, in the hope that they, like some of their countrymen before them, could quickly cross into San Diego and proceed to ultimate destinations in the United States. The Department of Homeland Security announced that as a result of President Biden’s new policy, Ukrainian refugees would be treated like the thousands of refugees from other countries who are required to “remain in Mexico” at least until May 23.

Citing the COVID-19 pandemic, the U.S. has been turning away asylum seekers who otherwise could be admitted to the country pending a determination of their status by federal courts. The provision of the law enabling the Department of Homeland Security temporarily to turn them aways (“Title 42”) is due to no longer be enforced as of May 23.

Although President Biden said in March that the U.S. would accept 100,000 Ukrainian refugees, the procedures for designating refugees still were being worked out in April. Meanwhile the Rapid Response Network’s Migrant Shelter Services, operated by Jewish Family Service, was assisting those persons from a variety of countries whom the Department of Homeland Security had admitted into the country.

When migrants arrive in San Diego, the Rapid Response Network provides medical checkups, hotel rooms for them to rest, and travel assistance to help the migrants reach their next destination in the U.S. Transit through San Diego typically last two or three days.

“All guests released into JFS’s care by the Department of Homeland Security are going through the legal process of seeking asylum in the U.S.,” commented Michael Hopkins, CEO of Jewish Family Service. The Rapid Response Network “provides case management, travel and financial assistance and legal support as needed. Asylum seekers and immigrants receive COVID-19 testing and health screenings, following public health guidelines. Guests also have the option to receive a vaccine.”

During the week ended April 17th, the Rapid Response Network assisted 814 guests through its shelter services. Of these 264 were children. The three countries from which the largest number of migrants originated were Ukraine, Russia, and Cuba. During the same week 804 migrants left San Diego for destinations outside California, while 74 headed for in-state destinations. On any given day during that week, there were an average of 417 migrants receiving shelter services. Since October 2018, the Rapid Response Network had assisted 63,637 migrants on their journeys to new lives.

Donald H. Harrison is editor emeritus of San Diego Jewish World. He may be contacted at donald.harrison@sdjewishworld.com.