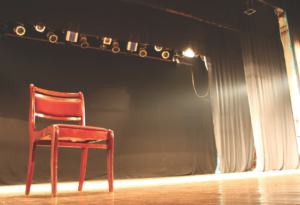 This Yom HaShoah, various theaters and cultural institutions across the country will commemorate the events of the Holocaust in a different way. On April 13, Remembrance Readings for Holocaust Remembrance Day will bring Jewish theater into the conversation about the Holocaust, and San Diego theaters are leading the way, participating in droves for the inaugural national event. The La Jolla Playhouse, Old Globe, North Coast Repertory and San Diego Repertory theaters had all signed on to participate in the program as of press time, with more expected to be added to the list in the coming days.

Each participating theater will organize staged readings with a play of their choosing from the newly launched Holocaust Theater Catalog (HTC), created by the National Jewish Theater Foundation (NJTF), housed online at the University of Miami Miller Center for Contemporary Judaic Studies. Arnold Mittleman, an accomplished producer, director and theater educator founded NJTF in 2007, and in 2010 was approached by people who wanted to fill a void that they saw in Holocaust research; leading to the creation of the Catalog.

“There was no Holocaust theater catalog that had ever been created that would allow people to go to one site to find all the plays that had ever been written about the Holocaust from 1933 through the present, in all languages,” Mittleman says of the mission of HTC. “I was shocked that this didn’t exist, but I willingly accepted the project.”

Mittleman has spent his entire life in the theater; from training in the high school performing arts and the NYU School of the Arts to the founding of the New York Free Theater to leading the Coconut Grove Playhouse to producing on Broadway and off-Broadway, and has worked on almost 300 productions. His passion for educating others about the Holocaust, however, has been a driving force for most of his life. It was in a conversation with other like-minded theater people that the idea of a home for Jewish theater, especially related to the subject of the Holocaust, came about.

“We started first and foremost to work on the research for the catalog, and as it developed, we were amazed at how many people were wiling to work with us, cooperate and help us around the world.”

Today, the catalog consists of over 600 titles, as well as relevant information and scholarly works associated with those plays. Almost all the worlds’ languages are represented in the works of the catalog. The challenge, Mittleman says, was to “make [these works] a relevant tool as the survivors pass away, and as people continue to struggle with anti-Semitism; and as many universities and theaters, memorials and museums search to find a unique and powerful way to make people aware and care about the events of the Holocaust.”

A very successful production of “The Soap Myth,” a play written by Jeff Cohen, actually sparked the idea that led to the Remembrance Readings program. Mittleman says the incredible impact of that play made him realize that bringing other plays from the Catalog into the public eye was an important endeavor that he had to get started on.

“The larger framework of this is the notion that Holocaust theater has to become an integral part of remembrance from now on. It has been sporadically, but it has not been done systemically. It struck me that one of the best ways to do this would be to see if, on a simple level, people would be willing to do a reading. So I settled o the Monday before Yom HaShoah, which is when theaters are dark and tend to do readings,” Mittleman says of the early work on the Remembrance Readings.

Mittleman began to work first with colleagues at the La Jolla playhouse, including artistic director Christopher Ashley and director of new play development Gabe Green. Along with their help, word of the Remembrance Readings was spread to other local theaters, including the Old Globe and North Coast Repertory theater, who eagerly signed on to participate. The commitment of San Diego theaters to the readings was to Mittleman the effective endorsement of the idea that this could be done in places around the country and could be something that could continue to grow in the future.

Playhouses in Chicago, Atlanta, New York and South Florida lined up on the heels of the news that San Diego theaters were signing up.

“It began to become very exciting for all of us, that San Diego was embracing this idea so wholeheartedly, and that these other amazing theatres were wiling to participate,” Mittleman says. “It really made me believe that this was not only a great group of people, but a great committed group of community citizens who understood the importance of what we were trying to do.”

While most theaters will stick to the April 13 program date, some, including the San Diego Repertory Theater, will present readings later in the season because of previously booked programming at their locations on that date.

“It is great to me that people are connecting with this date, but this is not a one-time event, and it isn’t even associated with a particular date,” Mittleman says. “It is the concept that theatre can, should and must be utilized in remembrance of the Holocaust.”

“When you are engaged in learning a part or working n a play, it is a very unique experience because you go into someone else’s shoes and develop an understanding of who that person is; so the thought is that theatre has this ability to both present ideas to an audience but also in a training process to allow people to empathize in another way, with these characters and people, to have a deeper understanding of what people have gone through or are a part of. So the notion of theatre being a tool in this way has many levels and possibilities,” he says.

“Just the exploration of how theatre can interface with people’s lives is important; the survivors will soon be gone, but we need to maximize the opportunity we have.”

Remembrance Readings Around the County

The History of Invulnerability

In the early 1940s there was one Jew powerful enough to single-handedly challenge the Nazis: Kal El, a.k.a. Superman. This is the story of Superman creator Jerry Siegel and his tumultuous relationship with his legendary comic-book character and the tale of a little boy in Birkenau who believes he will survive because Superman is on his way.

Struck with a terrible case of writer’s block, American novelist David reaches out to his 75-year-old, distant cousin Maria in Poland, hoping to find a quiet place to write and a little bit of inspiration abroad. But when David arrives in Maria’s tiny apartment, she bombards him with her desperate need to connect to her newly met relative. As tensions grow between them, Maria reveals details about her life during World War II and her experiences in the Holocaust. Soon David gains more than inspiration: he gains a family. Jesse Eisenberg’s moving new play explores kinship, identity, and the impact on a family of a long-ago trauma. Presented in Hattox Hall, located in the Karen and Donald Cohn Education Center, part of The Old Globe’s Conrad Prebys Theatre Center.

Near the end of World War II, in an abandoned salt mine where the Nazis have moved the Buchenwald machine factory, Austrian industrialist and concentration camp prisoner Curt Herzstark tinkers with an amazing device. A small, black metal cylinder, no bigger than the palm of his hand, the device is a technical marvel…and until it’s finished, it’s the one thing keeping Curt alive. Based on a true story, Kenneth Lin’s play tells the story of the “intelligence-slave” charged with creating the world’s first hand-held four-function calculator, intended as a gift for Adolf Hitler.

Due to scheduling conflicts the actual date of the reading is yet to be determined.

Jewish Mexico: It’s not an Oxymoron