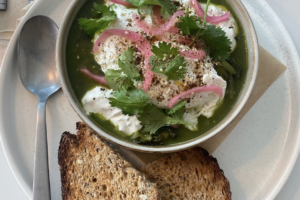 San Diegans in search of a unique blend of tradition, modernity, and creativity can find it at Gold Finch, the recently opened quick-service delicatessen and full-service restaurant in Torrey Pines.

The menu is a nod to the childhood memories of owner Tracy Borkum, who grew up in London’s Jewish epicenters, Golders Green and Finchley neighborhoods, for which the restaurant was named. The self-described “modern delicatessen rooted in Jewish immigrant culture” recontextualizes staples of Ashkenazi and Sephardic-style cooking, including family recipes passed down from Tracy’s mother, aunt, and grandmother.

Dining with my fellow Jewish media publisher, Diane Benaroya of L’CHAIM magazine, we thoroughly analyzed the extensive and adventurous menu before ordering the shakshuka, loaded giant latke, and banana fritter.

The latke — topped with fried egg, mushroom, broccoli rabe caramelized onion, and horseradish labneh — was plated so beautifully that I initially hesitated to spoil the sight by eating it. Once I eventually delved in, the diverse array of flavors kept me captivated, while the perfectly crispy latke delivered comfort food at its finest. (Pro tip: For those who aren’t necessarily horseradish aficionados, ask your server to hold the horseradish labneh or bring it on the side.)

Diane focused on the notably green shakshuka, as opposed to the more familiar red variety. Sauced up with tomatillo, spinach, chucks of potato, cilantro, dill and za’atar, the eggs were perfectly poached. Paired with nine grain toast, the dish proved to be excellent.

Served with cinnamon sugar, halvah ice cream, toffee coffee syrup, the banana fritter was a delightful, yet not overwhelming sugar rush. The banana is almost beside the point, as even those who aren’t banana lovers will enjoy the delectable cinnamon sugar coating. Tracy was also kind enough to send us home with Gold Finch’s rugelach, which easily melt in your mouth.

The ambiance was just as enjoyable as the food. Located at 3040 Science Park Road, the eatery’s 1,400 square-foot interior and exterior space was designed by Tracy, who is not only a restaurateur but also a design maven. And it shows. The venue is modern, light, and airy; and the vibe is a pleasing happy medium between upscale and casual. You can’t go wrong sitting outdoors or indoors, especially with the latter’s “indoor-outdoor” feel.

If at any given moment you’re torn between traditional Jewish-style food and a more novel option, give Gold Finch a try.

By Jacob Kamaras, JNS.org On Oct. 27, the fourth anniversary of the Tree of Life shooting in Pittsburgh, the deadliest anti-Semitic attack in ...
November 15, 20220
November 2022

By Stephanie D. Lewis Caution: Never speak with anyone probing into why your former relationship didn’t work out! First came the unexpected text: ...
November 15, 20220