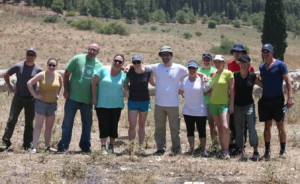 Russell F. Robinson, CEO of the Jewish National Fund (JNF), believes that Israel has reached an important milestone in its development as a nation.

“I think this is our moment of real Zionism,” he says, intimating that the Zionist experiment has come of age.

The turning point in history invoked by Robinson presents new opportunities for Israel’s oldest philanthropic organization, as well as for individuals interested in exploring Israel.

For Robinson, Israel showcases a triumph of the human spirit. Following the Holocaust, the nascent Jewish state was initially impoverished and represented “the gathering of the exiles,” but the new Israel “is a place where people can go by choice,” he reflects. The dynamic career, spiritual, and lifestyle opportunities that Israel now affords both visitors and prospective immigrants have prompted JNF to reconsider its mission.

“Zionism is maturing,” Robinson says, explaining that instead of organizing to ensure Israel’s survival, “now we get to be Israel’s greatest partner.”

As such, JNF has in recent years rolled out several programs geared towards creating awareness of Israeli culture and stimulating investment in Israeli public works projects. Each year, the Faculty Fellowship Summer Institute in Israel program, a partnership between JNF and Media Watch International, introduces two-dozen university faculty members of diverse and predominately non-Jewish backgrounds to Israel. The initiative is now in its 9th year.

“We have over 120 graduates of the 10-day program,” Robinson says, “and thanks to increased donor funding, we have been able to expand dramatically.”

The program facilitates an academic exchange. Participants are introduced to, or are paired with, Israeli counterparts in their field of study, thereby prompting collaboration, shared research, and an exchange of teaching concepts and values. Hebrew University, Tel Aviv University, Bar-Ilan University, University of Haifa, Technion – Israel Institute of Technology, and several other Israeli institutions all have partnered with JNF on the Faculty Fellowship Summer Institute in Israel program.

JNF also sponsors the Young Professional Volunteer Vacation. This program enables individuals to visit southern Israel, where they assist in building new communities. Likewise, the Sunshine Tour with Hal Linden and JNF’s Culinary Tour offer travelers an opportunity to experience Israeli cuisine by participating in hands-on workshops with top Israeli chefs. Between the popular Birthright Israel program and these new initiatives, JNF has made it possible for nearly 16,000 foreigners to visit Israel annually.

“The [programs go] beyond the confines of conflict and demonstrate how Israel makes the world a better place,” Robinson says.

The programs also reflect changing perceptions of Israel held by Diaspora Jews as well as Israelis themselves. An optimistic narrative is emerging from the decades of turmoil that characterized Israel’s birth and struggle for survival. Perhaps unintentionally, author Jonathan Safran Foer’s story, “Maybe it was the Distance,” published in the June 2016 edition of The New Yorker, echoes Robinson’s assertion that Israel has achieved stability and has both a proud history and a bright future ahead.

In “Maybe it was the Distance,” Grandfather Irv, his 43-year-old son Jacob, and his 11-year-old grandson Max pick up their “Israeli cousins” at Reagan International Airport in Washington, DC. After collecting Jacob’s cousin Tamir and his son Barak, the family quickly engages in a heated discussion about Israel. Fending off doubt-driven questions concerning Israel’s protracted water crisis, hostile enemies, and the seemingly irresolvable situation, “Israel is thriving…Things have never been better, anywhere, at any time,” Tamir insists. “Walk down the streets of Tel Aviv one night,” he suggests.

“There’s more culture per square foot than anywhere in the world. Look at our economy. We’re sixty-eight years old…We have only eight million people, no natural resources, and are engaged in perpetual warfare. All that and we file more patents every year than any other country, including yours,” Foer writes.

The above passage illustrates how, despite enduring decades of conflict, Israelis today enjoy cultural prosperity, and the so-called “start-up nation” has made the world take notice through its numerous technological innovations.

Founded in 1901, JNF’s philanthropy echoes the foundations of Israel. The country’s original borders were drawn around land JNF had purchased during Ottoman rule and the British Mandate. During the past 113 years in Israel, JNF has planted more than 250 million trees in Israel, built more than 240 reservoirs and dams, developed more than 250,000 acres of land, and created more than 2,000 parks, according to the organization’s website.

Robinson regrets that what he describes as a shallowly conceived, incendiary, and emotional discourse prompted by traditional news media casts a pall over Israel’s achievements.

“To be sure, there are blemishes,” he admits when reflecting on Israel’s history. He suggests, however, that Israel has allowed its record to become tarnished in part because “Jews have a fear of talking about [their accomplishments].” Consequently, Robinson and JNF advocate that Israel refocus the discussion.

“Why can’t we start a conversation about Israel from a positive perspective?” Robinson asks.

“No other culture in the history of the world has come back from a water crisis like the one Israel faced 20 years ago,” he notes. Today, Jordan and some of Israel’s other neighbors eagerly embrace Israeli water technologies and methods.

In light of JNF’s efforts, Foer’s fiction may ring true. Israelis, as well as people around the world, are seemingly tiring of an endless emotion-driven dialogue about Israel.

“The world changes,” he says, “but the narratives that bring people together are always positive.”