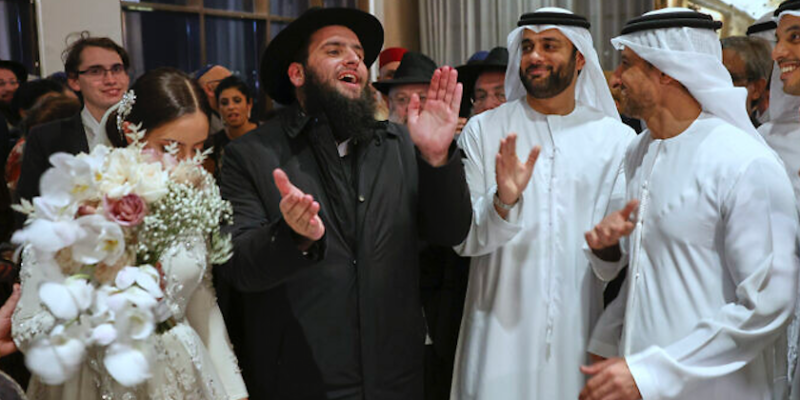 Levi Duchman, the chief rabbi of the Jewish community in the United Arab Emirates, celebrated his own wedding on Sept. 14. It happened to be the first Jewish one in Abu Dhabi.

With a guest list of 1,500, including the Egyptian, Moroccan and Chinese ambassadors to the UAE, the wedding simultaneously celebrated the second anniversary of the Abraham Accords’ signing.

Jews, Muslims and Christians joined together to celebrate the union of Rabbi Duchman and Lea Hadad, both emissaries of the Chabad movement, as well as the fruits of normalization, cooperation and peace.

As the first rabbi in the UAE, Duchman says he has spent the last eight years building up infrastructure to facilitate the viability of Jewish life in the Gulf nation.

The interview has been edited for brevity and clarity.

Q: How long have you been living in the UAE?

A: I have lived in the United Arab Emirates for approximately eight years. Before the normalization agreements, I was living in Casablanca, Morocco. During my time in Morocco, I had the opportunity to travel to the UAE and host a Passover seder for New York University in Abu Dhabi. Nearly six years before normalization, I moved to the UAE.

Q: From your perspective, how has Jewish life in the UAE changed as a result of the normalization agreements?

A: A lot has changed. If you look at the UAE, it is composed of seven different Emirates that agreed on unification [in 1971-72]. The UAE was always a welcoming place in terms of welcoming all religions—I mean, there are over 200 nationalities living here. Having said that, the Jewish community always received support from the government.

In terms of the relationship with Israel, the government did not have that until the signing of the Abraham Accords. Prior to that, living as a rabbi in the UAE, I always felt very welcomed by the government; they always ensured our community has everything we need. In terms of kosher slaughterhouses, institutions for Jewish education, places of worship, or anything else our community needed, we could always count on the full support of the government.

Now, with the Abraham Accords, a huge door was opened for Israelis and Jews around the world who had never heard of the UAE or its levels of religious tolerance. The growth of the Jewish community meant growth in infrastructure, for example, bigger educational facilities, more kosher restaurants, bringing more rabbis into the country, and building Jewish cemeteries.

Q: How would you describe education about Jews or the knowledge of standard Jewish history in the UAE?

A: Prior to the Abraham Accords, very little education existed about Israel and Jewish history. Now, this has very much changed. For example, I’ve been to a few Holocaust remembrance events in the UAE and have seen in attendance members of the government such as the minister of culture. Jewish and Israel education has certainly risen in the UAE as a result of the Abraham Accords. We, for example, run a Jewish nursery school and Talmud Torah in our Mini Miracles Educational Center [in Dubai]. Our Sunday and after-school programs for children going to non-Jewish schools hold extremely high standards of Jewish and Israel education. We were successful in bringing different madrichim and madrichot (youth guides in Hebrew) from both Israel and France to help strengthen our educational programming. As of now, we have 112 children signed up for these programs. We have a beautiful center in Dubai and are currently constructing a second one in Abu Dhabi.

Q: Have more Jews been moving to the UAE since the Abraham Accords were signed?

A: Tremendously. Much of it is coming from Israeli startup companies. Major Israeli companies such as Rapyd (a fintech company) are establishing offices in the UAE. This in turn has led to a surge of Jewish families moving to the country since the normalization agreement. You have companies like Hilton, where top Jewish executives have begun moving to the UAE knowing that the community now has the infrastructure in place to cater to their needs. Our community has grown from a few hundred to several thousand.

Q: What was it like to have your wedding in the UAE?

A: My wedding was in Abu Dhabi; it was the first Jewish wedding in Abu Dhabi. It was quite incredible because we had 1,500, if not more, attendees at our wedding, including ambassadors, UAE government officials, and both colleagues and friends from around the world who came to Abu Dhabi to celebrate a Chassidic wedding. It was absolutely incredible. We had a Chassidic singer, Israeli band and Neshama choir, all coming to Abu Dhabi to celebrate a kosher Jewish wedding.

It was at our wedding, where we saw Chassidim dancing and celebrating with Emiratis, that we truly saw the power of the Abraham Accords. We had the chief rabbis of Iran, Singapore, Nigeria and Turkey attend and dance at the wedding. We had the Chinese, Egyptian, Moroccan and Irish ambassadors to the UAE attend as well. I did not expect all of these guests to attend, and the wedding was beautifully covered by both Arab and Jewish news outlets. I have been the first resident rabbi here in the UAE. After eight years, I was able to see all the meaningful and wonderful relationships we have built in this country, and it was absolutely incredible.

Q: How would the “Jewish experience” be different in other parts of the Arab world?

A: I think the main difference is that the United Arab Emirates gave us the opportunity to build the Jewish infrastructure needed to further develop the community. Mikvahs, places of worship, kosher restaurants have simply made it easier for Jews to build a life here. Judaism can mean a variety of things to different people. It can mean having a place to eat a kosher meal, to do Kol Nidre or to buy challah in order to do a blessing. What we are here to do as a rabbi for the community is to make sure all Jews in the UAE are catered to. Members of the community are feeling more comfortable because they know they can preserve a Jewish way of life in the UAE. I don’t want to name other countries specifically, but many do not have the infrastructure to attract a Jewish community and allow it to flourish. For example, next week there are some NBA games—I believe the Milwaukee Bucks and Atlanta Hawks. Some members of their ownership are Jewish and they are joining us for Yom Kippur services because they know they can have that here.

Q: Should future normalization agreements depend on Arab states’ willingness to help rebuild and strengthen Jewish communities within their borders?

A: It is incredibly important to support the building of Jewish infrastructure in the Diaspora; this is exactly what we are doing here in the UAE. Normalization agreements should not be contingent on Arab states agreeing to rebuild and strengthen Jewish communities, but the agreements would be enhanced by such a commitment. For example, many of the Jewish CEOs and executives working for companies in all different types of sectors have willingly moved here because the UAE government has shown a commitment to protect the Jewish community and help it flourish.

Q: What advice would you give to countries in the region seeking to attract and strengthen their Jewish communities?

A: I think it’s about learning about the basic needs of the community, whether it is education or kosher foods. This can be done by working closely with Jewish leaders on the ground who understand the needs and wants of their own community members. We work continually with the UAE government and have achieved incredible advancements through this close collaboration.

It’s about having people on the ground and providing them with the infrastructure needed to live a Jewish life. It is actually easier for me to find kosher food in the middle of Dubai than in central London. Etihad Airways, the national airline company of the UAE, has its own kosher kitchen.

The government is currently building the Abrahamic Family House, which consists of a mosque, church, synagogue and educational center to be built on Saadiyat Island, the cultural heart of Abu Dhabi in the United Arab Emirates. For our wedding, we didn’t have to import kosher food, everything was done locally. The work cannot be done remotely; we need to be on the ground and infrastructure is key.

Prayers & Passages: The Joy of Sukkot

By Eva Trieger On September 2, 1939, much of the world was clueless that the Nazis had opened their first concentration camp to ...
September 6, 20220
Social connect:
or