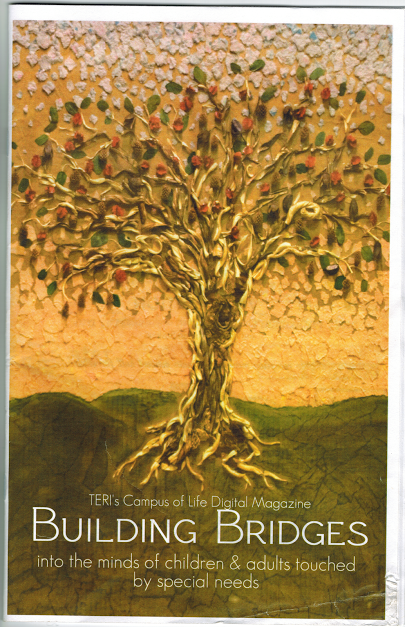 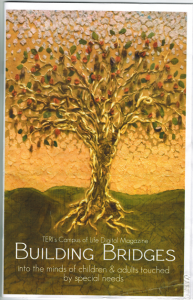 By Stephanie Lewis and Sharon Rapoport

“Building Bridges,” an educating, inspiring, and entertaining show was an innovative combination of music, bittersweet comedy, philosophical rant (in the best sense of the word), and science which took place on October 17 at the California Center for the Arts.

New York Times best-selling author Ron Suskind shared a powerful story that evening: The outstanding tale of how a father found a unique way to converse with his non-verbal son, a boy with Autism Spectrum Disorder, through scripted dialogue passages taken from Disney movies. Suskind interspersed his monologue performance with famous Disney ballads, played by the Palomar Symphony Orchestra.

His findings are supported by scientific research called “Affinity Therapy” for people on the Autism Spectrum. Characters, maps, calendars, (what used to be called “obsessions”), can now be a tool for them to make sense of the world and to help them connect.

That describes the left-brained logistical/mechanical portion of the evening, but the real essence of this palpable hands-on experience was a significant and meaningful turning point that will stay with the audience forever. The opening tune, (When You Wish Upon a Star) performed by the amazing all-student-run band, was followed by 90 minutes of Suskind’s riveting delivery (with several humorous Jewish asides) as he recounted wayward dreams and smashed hopes which slowly resurrected and reincarnated into a new path of engagement that nobody dared to imagine for his beloved young son, Owen. By the show’s conclusion, (Let It Go from the movie Frozen, which was belted out in the pure voice of an angel from student, Emily Holderman) it was clear this had been a waterproof mascara test night, indeed!

Most memorable was Suskind’s description of that fateful cold, rainy afternoon when Owen, who had regressed and stopped talking completely, as so many children with autism do, began uttering something sounding like, “Juicervose, juicervose.” A sippy cup with apple juice was repeatedly offered, but to no avail.

In the background, the family television droned on with its usual Disney feature, this time The Little Mermaid, and specifically the highly theatrical scene where evil Ursula demands Ariel make a crucial trade. “Go ahead— make your choice! It won’t cost much, just your voice!”

Like lightning, it struck Suskind and his wife. Owen wasn’t attempting to quench his thirst, (at least not his thirst for juice) he was relating emotionally to the dialogue spoken in the movie from a scene with an ironic theme that hit very close to home. “Juicervose” = “Just your voice!”

Amidst jubilant whoops and cheers, Owen kept repeating this telltale phrase with a wide smile on his face. Upon hearing about additional Disney break-throughs like this one, the doctors remained highly dubious. But in the Suskind family’s eyes, Owen had definitely not vanished, as it first appeared a few years back with the onset of symptoms and his complete regression. He just needed to be reached in a different way. And the entire family knew exactly what they needed to do.

Through countless months, from talking to Owen through a realistic puppet (Iago from Aladdin) to sharpening their acting chops while taking on entire personas and characters straight out of The Jungle Book, Beauty & the Beast, and The Lion King, in what they dubbed “Disney Therapy,” they forged ahead with immensely successful connections that resulted in the transformation of their son. Together, they navigated their own personal “Circle of Life.”

Meanwhile, after the last round of thunderous applause faded in the theatre, the question (which could have been appropriately asked using another famous Disney song title) that was surely on the minds of all in attendance who had just experienced this magical evening was, “Can You Feel the Love Tonight?”

And as sure as fairy godmothers wave their magic wands, that answer would have to be a resounding, “Yes, definitely!” Because a dream is a wish your heart makes.