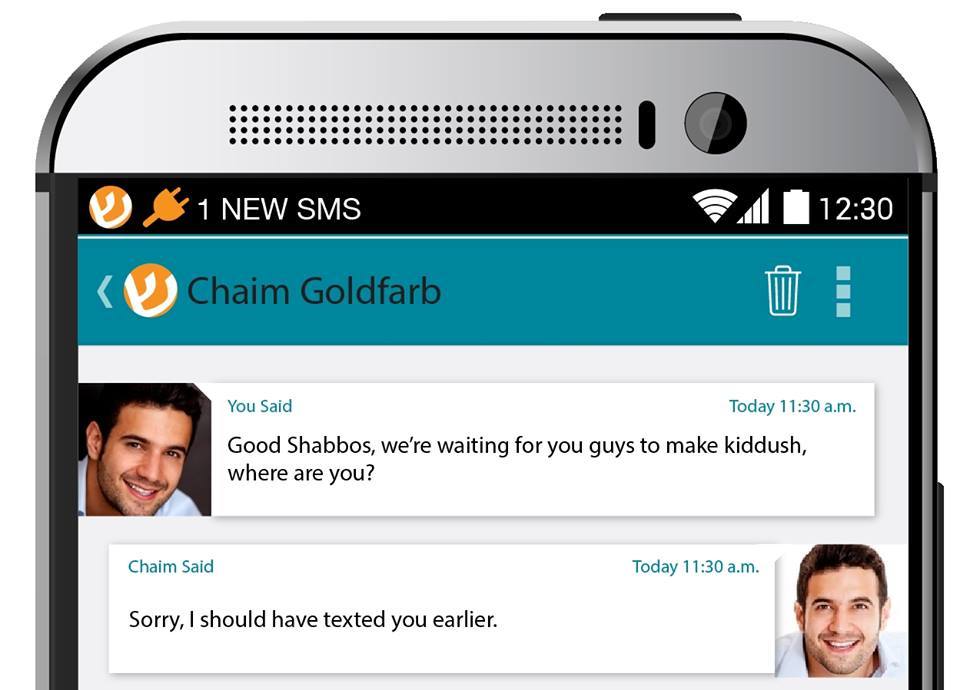 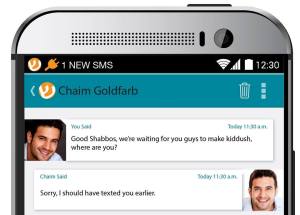 In 2012, teens were sending an average of 60 texts per day, according to a report by the Pew Internet & American Life Project. That number was up from 50 in 2009, so it is likely even higher in 2014. Orthodox teens are no exception. In 2011, an article published in the New York Jewish Week drew attention to the high percentage of modern Orthodox teens for whom “half Shabbos” is a way of life. Half Shabbos is when one refrains from all of the 39 Shabbat prohibitions except when it comes to texting, which falls under the prohibition of using electricity in non-emergency situations.

Yossi Goldstein and a like-minded team of smartphone app developers, however, think they have a solution to half Shabbos, one that enables teens to text on Shabbat without compromising halacha (Jewish law).

On the company website is a list of the halachic challenges related to texting, such as muktzah (the device has no use on Shabbat), mavir (turning the screen on and off may be considered making a fire), and koteiv (writing), among others. It also lists why the Shabbos App technology works around these challenges, making it possible for teens (and anyone else)—for $49.99—to text permissibly on Shabbat.

The company, according to Goldstein, does not yet have rabbinic support or approval but is “working with several rabbis.”

Could the Jewish world be seeing widespread smartphone use in synagogue by next Rosh Hashanah? It’s unlikely, say all those who spoke with JNS.org about the app—Orthodox and non-Orthodox alike. That’s because the app goes against what is commonly referred to as “the spirit of Shabbat,” explained Rabbi Daniel Rockoff, who received rabbinic ordination from Yeshivat Sha’alvim in Israel.

“The observant community won’t go for it,” he said.

Nonetheless, Rockoff isn’t surprised such a technology was invented. He said Jewish law develops with the times and that technology is playing an ever-increasing role in our lives. He said this role is heightened for teens, and that it’s the responsibility of the Jewish community to listen to, understand, and address the next generation’s concerns.

“But we also need to keep it in perspective and realize the things we think are necessities may not be, and we have to consider their place in relation to the whole idea of Shabbos and that Shabbos is a sanctuary in time. We need to show the next generation Shabbos is something to be preserved,” he said.

Rockoff drew on a rabbinic dialogue that dates back to 1917, around the time when telephones were invented. He said rabbis at the time examined telephones from a scientific perspective to determine whether they could be used on the Sabbath. By 1930, rabbis had determined that while use of the telephone might work out on a technical level—“the circuits are open so by picking up the phone you are not really doing anything substantial”—using them was not something the Jewish people chose to accept.

“Just because something is OK in principle, that doesn’t mean it is something that should be practiced. We don’t use electricity because of minhag Yisrael (tradition),” said Rockoff.

That doesn’t mean that there haven’t been inventions that have made keeping Shabbat easier or have enabled people with disabilities and other challenges to keep Shabbat. Machon Tzomet, a company in Alon Shvut, Israel, has been at the forefront of these developments, including a Shabbat-permissible electric wheelchair and stairlift as well as disappearing ink for essential writing tasks.

Maish Latidus, chief engineer for Machon Tzomet, said he thinks the Shabbos App might be something worth exploring, but not for the reasons the company is touting. He told JNS.org he does not like the direction of the app.

“When you look at the applications Machon Tzomet works on, they are either for essential services such as health or security or they are for other services in line with the spirit of Shabbat,” said Latidus, noting he could see such an app being used to make a necessary map accessible, perhaps for doctors who would need to use smartphones anyway.

Elie Klein—who from 1999-2003 served as an advisor for NCSY, the youth movement of the Orthodox Union, today is raising his own two children, ages 7 and 5, in Jerusalem—said he was taught from working with teens was that one should empower them, help them create their own Jewish path, and meet them on their level and at the locations they like to frequent. But one shouldn’t water down faith on their behalf, he said.

“There has to be a point at which you stop giving them all the power and hold a little bit back, so they understand the way tradition works and that to some extent they have to fit into the framework of what came before [them],” said Klein. “They can push it forward with their own voice and in their own way, but it has to fit.”

Klein said the Shabbos App should force the Orthodox community to examine itself and how it conveys the message of Shabbat observance to youth. He said Jewish teens should be taught to feel the beauty of Shabbat, and to understand their history as well as the depth of the religion and tradition.

“Shabbat is the technology you cannot get enough of once you get into it,” Klein said. “I think it is really important to model that.”

Meredith Jacobs, author of “The Modern Jewish Mom’s Guide to Shabbat,” expressed a similar sentiment. She said that even for non-observant families, Shabbat can and should be seen as a day “that we do things differently, where we spend more time at dinner, where we have a different kind of meal, linger at synagogue with friends—spending time with each other.” The Shabbos App, she said, “would ruin Shabbat.”

Jacobs thinks today’s teens today are losing the ability to communicate in person and that family celebrations of Shabbat can serve a role in helping teens to unplug and be present—and for parents to do the same.

“The turning off of electronics lets you have that time to communicate with each other in a way I feel we lose otherwise,” Jacobs said, noting that parents should set limits on texting and electronics for themselves and their children. Using Shabbat as an opportunity for this will help teach teens that there is something deeper than their smartphones, and there should be repercussions if a parent’s limits are not adhered to, she said.

“You are the parent and no means no,” said Jacobs.

But what about when it comes to outreach? The Chabad-Lubavitch movement, for example, has been at the forefront of creative use of technology to meet people where they are at, and to engage them in Jewish life and learning. Could the Shabbos App work in these instances?

“It’s a slippery slope,” said Mendel Segal, executive director of the Vaad Hakashruth of Kansas City and a member of the Chabad movement. “What is being done on the phone? Is it something necessary or is it just for personal gratification? First your texting, next thing you could be watching a movie, buying shoes.”

But how about further down the road?

“I don’t know how technology will evolve in the next five years,” said Rabbi Rockoff. “Could I see even in 20 years that there is some way to read literature or learn on some type of electronic device on Shabbos? Yeah. The Shabbos App is making waves and that will lead to something—at a minimum the process of a good conversation.”

Maayan Jaffe is senior writer/editor at Netsmart (www.ntst.com) and a Kansas-based freelance writer. Reach her at maayanjaffe@icloud.com.

POLIN Museum of the History of Polish Jews Opens