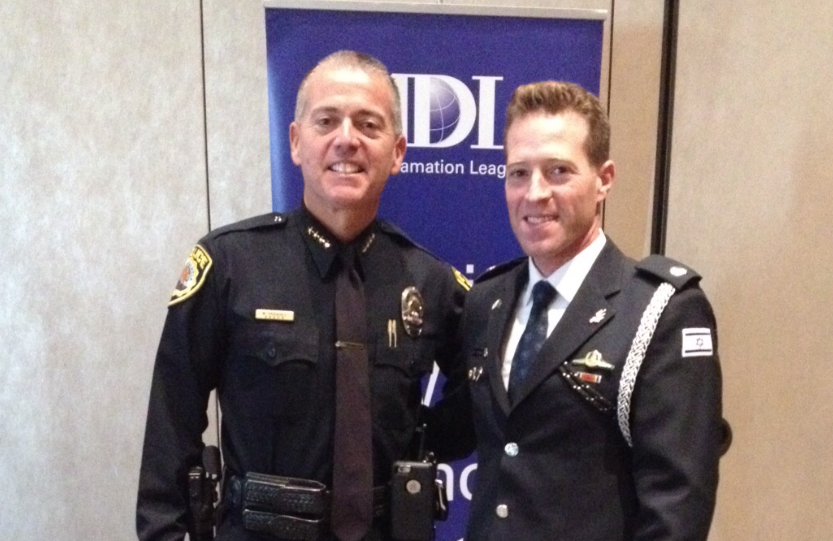 met with Micky Rosenfeld on November 9 after he completed a training session with San Diego Police officers and other local law enforcement at Congregation Beth Israel, sponsored by the Anti-Defamation League (ADL). Here is the summary of our interview.

L’CHAIM: Why did the ADL bring you to San Diego?

Micky Rosenfeld: In Israel we have constant threats from extremists. The Israel National Police (INP) deals with the same situations that police forces around the world deal with. ADL brought me so I could share Israel’s expertise with local law enforcement. Today I gave a briefing on the current situation in Israel and how we prepare for different threats and scenarios related to hate crimes and extremists.

L’CHAIM: How much activity does the INP assume in the current wave of stabbings and lone-wolf attacks? What about regular criminal activity?

L’CHAIM: What kind of training did you provide?

MR: My lecture was about how the INP deals with different threats and terror scenarios. I reinforce the importance of having a good relationship between law enforcement and the communities they serve, because this is essential to fighting hate crimes and terror attacks.

Our specific tactics and strategies in combating terrorism have proven successful and we have limited casualties despite many attempts by terrorists.

L’CHAIM: Can you speak about police strategy and tactics?

MR: Firstly, we must solve the terror related incident. Secondly, we must get the incident on the ground back to normal.  We have changed our tactics to include using social media to uncover potential terror threats.

Terrorists often post clues that lead us to assume they are ready to act. Also, through community policing, we have our finger on the pulse. We are in the communities, on the streets, speaking Hebrew and Arabic, on buses, undercover and in uniform. We are able to preempt many violent incidences this way. In the event of a terrorist related incident, large or small, our emergency services work together. Medics and law enforcement officers’ work together to get the incident on the ground back to normal, for the victims and for the public.

The public knows there is a police force out there, despite the incident that has happened, and the connection between the police and the public is strengthened.

L’CHAIM: What about prevention?

MR: Intelligence is prevention and community policing is the best prevention.

L’CHAIM: Is this a third intifada?

MR: Absolutely no. The perpetrators are lone wolves, politically motivated, between the ages of 13–33.

L’CHAIM: Is response from the INP proportional?

MR: Absolutely yes. Israel puts out its cc footage immediately to prove to skeptics that police officers do not shoot to kill, unless they must save a life or their own.

L’CHAIM: Did you meet with officials in other cities?

MR: I briefed Congress about the current situation in Israel. Also, I met with NYC police to discuss terror situations and advise.