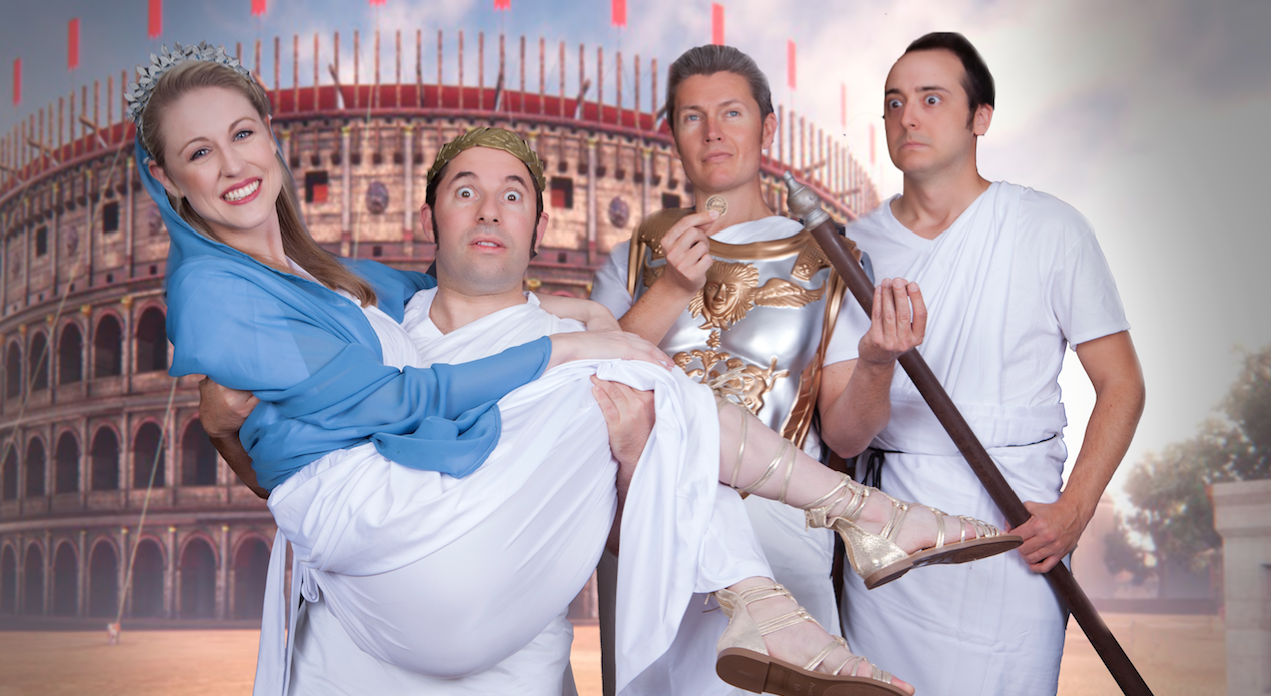 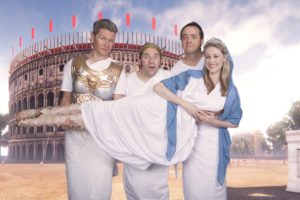 David Ellenstein, The North Coast Repertory Theater’s (NCR) artistic director for over 15 years, shared with L’CHAIM upcoming and current plays on the calendar for NCR in Solana Beach.

Ellenstein stated, “The North Coast Rep’s progress report is better than ever. Attendance and fiscal growth are up and the response from our patrons adds to the overall response we are getting. What we are doing grows, as the notoriety of artists grow as well.”

“The word is out, the work is good and we take good care of our artists, treating them well and with respect.”

His efforts along with others support the North Coast Rep’s mission “to create a platform where the artist and the audience thrive through the intimacy of live theatre, recognizing the power of theatre to challenge complacency, revitalize the imagination, nurture the unexpected and embrace variety and diversity into our lives.”

A veteran of over 250 theatrical productions, some of Ellenstein’s favorite directorial roles have included: Travels With My Aunt, William Faulkner’s Old Men, Freud’s Last Season, Faded Glory, Mandate Memories, My Name is Asher Lev, The Tempest, A Shayna Maidel, Tuesdays With Morrie, amongst many notable works.

His father, the well-known actor Robert Ellenstein who starred in notable productions, including North By Northwest, Wild Wild West, and countless others, imparted a powerful message regarding theatre. Ellenstein learned how people are affected greatly by plays, eliciting laughter and tears. Theatre encourages a broader perspective and tolerance of others. Ultimately theatre, he believes is about community and how we treat one another.

Ellenstein is currently directing The Father, by Florian Zeller, translated by Christopher Hampton. This West Coast Premiere runs from May 30 through June 24. Originally titled La Pere, it won the 2014 Moliere award for Best Play. Made into the film Floride In 2015, it also achieved an American premiere on Broadway and to the Samuel J Freedman Theatre in 2016.

Receiving widespread acclaim, according to Playbill, the London newspaper The Guardian gave the London production a rare five-star review calling it, “A savagely honest study of dementia and the best play of the year.”

Called an “unqualified triumph” and also a “super smart play,” by the London Telegraph, The Father received the Best Play Award in Paris, London and New York and has been honored with a war chest of awards. Andre, the lead character was originally, played by Tony Award winning actor, Frank Langella. Ellenstein directs James Sutorious who has worked on Broadway and also at the Old Globe Theatre, bringing a fresh perspective to the lead. The play possesses many layers with a somewhat complex theme regarding Alzheimers.

Andre is an 80-year-old man, who questions whether he was a tap dancer, living with his daughter Anne and her husband Antoine? Or in fact was he an engineer, living with his daughter and her lover Pierre in France? He is in his pajamas and continues to misplace his watch which may be a metaphor for time, as the watch is his most precious possession and he senses he may be losing control. As Andre was quite the raconteur in his younger days, he flashes back on his bon vivant, man about town days, which may be at times amusing and at other times sad. While this may be tough for some audiences, it is a worthwhile and meaningful play. The story plays out theatrically like a mystery, and is a serious topic presented in a unique way.

Recently, Dr. Silver, a neurologist from Scripps in La Jolla spoke with the cast of The Father. He discussed Alzheimers and dementia so that they would have a better grasp regarding portrayal of Andre.

“Reaux brings a better voice to Weill than anyone has ever heard and a degree of identification with the material no one has matched sine Lotte Lenya himself,” said Stephen Holden in The New York Times.

A Funny Thing Happened on the Way to the Forum, runs from July 11 through August 18. Music and lyrics were created by Stephen Sondheim and the play adapted from the book written by Burt Shevelove and Larry Gelbart. Classic songs include: Comedy Tonight, Lovely, and Everybody Ought to Have a Maid. This is a bawdy, hilarious comedy revival of a hit Broadway laugh-a-minute show, based on the plays of Plautus.

The play features an ancient Roman a slave, Pseudolus, scheming his way to freedom who wants to win his freedom, playing matchmaker to his master’s son Hero, helping him to win the beautiful courtesan Philia, betrothed to the egotistical soldier Miles Gloriosus. Things don’t go according to the master plan, ensuing in blackmail, funny disguises and long-lost children. Meanwhile Pseudolus desperately tries to keep up with his end of the bargain. The original movie starred Zero Mostel, Buster Keaton, Jack Gilford and Phil Silver, Annette Andre and others, played in 1966.

In addition to theater summer camp for children, many other exciting plays are in the line-up for the upcoming season.

Twilight Zone Unscripted opens June 25, and pays homage to Rod Serling’s breakthrough sci-fi series of the same name. Audiences enter the wonderous dimension of imagination, as improvised episodes are created with every performance.

Blithe Spirit, a Noel Coward ghostly comedy runs September 5 through September 30. A beloved smash hit of London and Broadway stages it’s way to the NCR. This is a classic story of a socialite novelist, engaging an eccentric medium. Married to his shrewish second wife, he is visited by his unforgiving first wife through a séance. The audience is summoned for an otherworldly evening of theater, overflowing with sophisticated and effervescent fun.

Holmes and Watson, a West Coast Premiere, written by by Jeffrey Hatcher and directed by Ellenstein, follows the Season with an interesting new script. Three years after Holmes and Moriarty are presumed dead, as Holmes was believed to have plunged to his death off Reichenbach falls, Dr. John H. Watson receives a telegram quite to the contrary. Anything but “elementary,” three men appear in an island off the Scottish coast in an asylum claiming to be Sherlock Holmes. Watson is brought in to decide, who is the real Sherlock Holmes? Or can he?

As the investigation ensues, Watson is drawn into a web of intrigue, murder and surprise, leaving you on the edge of your seat as the fateful confrontation between Holmes and his nemesis Moriarty is revealed. Holmes and Watson is a suspenseful, fun ride from beginning to end. A mystery with many twists and turns, just when you think you have figured out the plot, another surprise comes along to derail your conclusion. (Audiences are asked not to reveal the ending!)

Instead of the usual holiday fare, a musical treat is presented in the form of Always Patsy Cline, in December.

During January through February of 2019, audiences are further entertained with Moon Over Buffalo, by Ken Ludwig, a leading comedy writer. Ludwig also wrote Lend Me a Tenor. The play promises to lead audiences on a wild and wacky voyage. Everyone is wearing the wrong costumes and reading the wrong lines. Expect an evening of mayhem filled with comedy and running gags.

Gabriel ends the 2018 calendar season. This is an interesting story about a woman, living on Guernsey, an island during World War II in 1943 who is protecting her Jewish daughter in Law. British playwright Moira Buffini’s award-winning Off Broadway play presents the dramatic tale of the loss and dangers of a family under Nazi occupation. This is a dynamic and passionate play, directed by Associate Art Director Christophe Williams from Last of the Red Hot Lovers. Gabriel explores the perils of survival through mystical beliefs and loyalty.

The World Premiere of Another Roll of the Dice, July 10 through August 4 , 2019. With music and lyrics by Frank Loesser, the book by Mark Salzman, and based on the stories by Damon Runyon, creators of Guys and Dolls which is set in a diner. This includes a bawdy, tough waitress and some funny gamblers, with 3 stories intertwined. Songs include: Heart and Soul, Two Sleepy People, and Let’s Get Lost.

Ellenstein brings a dedication and passion with attention to detail to the theatre, creatively directing each production as if for the first time. With an impressive history of acting and directorial credits, he continues to bring a depth of education and entertainment to audiences of all backgrounds.

“We have a diverse season, an audience jumping from genre to genre, challenged not in a way to turn anybody off,” shared Ellenstein.

“We have chosen to present stories that will appeal not only to our loyal subscribers, but to a broad spectrum of theatre-goers throughout the county.”

Ellenstein hopes to find a more ambitious space for the NCR in the future, one with approximately 30,000 square feet to accommodate larger audiences and a larger stage in the North County Coastal area.

“I deeply love how we are putting on the best possible productions, however it’s also our lives. Arts are about celebrating what is great about being a human being. The process of creation of work should mirror that idea,” according to Ellenstein. 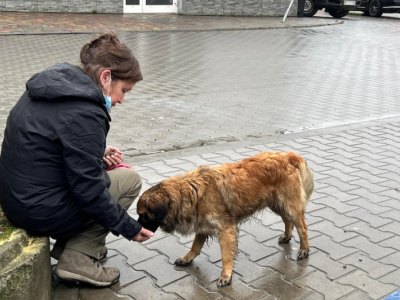