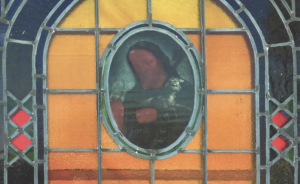 Why did a prominent Valley Center resident who was Jewish underwrite the cost of a stained-glass memorial window at a local Christian church? It is a question that has been asked repeatedly over several decades, but the answer was recently uncovered in a vintage file at the Valley Center History Museum.

The church was Valley Center Community Church, an interdenominational meetinghouse which traces its roots to 1885. Since its founding, it had been meeting in rented spaces until 1947 when the church acquired a permanent home. The former Marine Base Chapel at Camp Elliott San Diego was decommissioned, taken apart, and moved to Valley Center as new home of the church.

When a call went out to fund the cost of nine stained-glass memorial windows, Martin Gang, often described as a pillar of the Jewish community and the leader of several major national Jewish organizations, was among those who came forward with funding.

So, who was Martin Gang and why did he, a man who became prominent in Jewish affairs, sponsor a Christian icon in a house of worship that was not of his faith.

Gang and his wife Josephine came to Valley Center about 1930 after he graduated from Harvard Law School at age 29. He established what would become a well-known and successful dairy farm called Gang Ranch which also grew olives and oranges. He raised four children: Adele, Adrian, Frank and Mark.

But farming, it turns out, was an avocation for Gang. His true profession was the practice of law, and he is generally acknowledged as a pioneer in the field on entertainment law. His client roster would grow to 20 celebrities, among them Bob Hope, Lucille Ball, George Burns, Frank Sinatra, Bette Davis, Grouch Marx and Jack Benny. Many would visit his Valley Center farm, recalled daughter Adele.

During the ensuing years, Gang would take on a prominent role in several major Jewish organizations, but he also became the first Jew to become chairman of the board at a Catholic school and established a human relations institute at a Jesuit school. He also aided in restoration of Pala Mission.

In a recently found vintage interview with the Valley Center Historical Society, his daughter said her father supported many religious causes, Jewish and non-Jewish. “We were raised in a philanthropic environment where it was the cause that mattered,” she recalled.

While living in Valley Center, she remembered her father rescuing members of his extended family from the Nazi Holocaust, and later sponsoring other children, some of whom would live in the family home on 35 acres at Cole Grade and Fruitvale roads.

The onetime adobe home built by Gang was razed in 1979 and the property was acquired by the local school district for use as an agricultural farm and playing field. Gang’s name is remembered today by a sign on the property reading, “Martin Gang Agricultural Learning Center” and the gates leading to the former home are still in place with the name GANG inscribed in the concrete, reportedly engraved by one of his children.

Along with mementos of the Gang family on view at the Valley Center History Museum, a grove of mature olive trees planted by the ontime farmer continues to thrive, and a stained-glass window recalls his memory at the local Community Church.

The Valley Center History Museum at 29200 Cole Grade Road is open Tuesday through Saturday from noon to 4 p.m. Admission is free. For more information, visit vchistory.org or call (760) 749-2993.

A Rose Who Survived