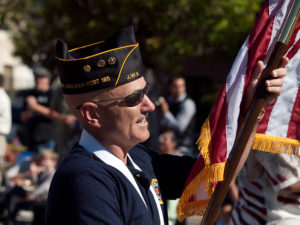 The U.S. Census Bureau estimates there are more than 234,000 veterans living in San Diego County, about 10% of the total civilian population 18 years and over. These veterans served during World War II, the Korean War, the Vietnam War, the Gulf War and the wars in Iraq and Afghanistan. They range in age from teenagers fresh out of high school to great-grandparents in their 90s. They are men and women of every age, race, religion, and socioeconomic class.

I was interested in learning more about the Jewish veterans in San Diego, so in November, I attended a meeting of the local post of Jewish War Veterans of the USA (JWV). JWV was founded in 1896 and is the oldest veterans organization in America. Its purpose is to support and promote services and programs for all veterans, combat anti-Semitism and advocate for veterans and the Jewish community here and abroad. The Harry Apleman & Arthur Towne Post 185 meets on the second Sunday of each month at Paradise Village, a retirement community in National City, to discuss veterans issues, organize events and programming, socialize and share stories of service over coffee, lox and bagels (an essential part of any Jewish American gathering).

Many members wore Post 185 caps with military decorations, and the meeting began with ceremony: we all rose for the Pledge of Allegiance, preparation of the altar, and an opening prayer led by Chaplain Betty, a proud veteran’s wife with years of service.

As we went around the room to introduce ourselves, I learned that the veterans’ experience spanned World War II, Korea, and Vietnam; included many branches of the military and multiple positions: Air Force, Army, Navy, Marine Corps; physician, engineer, surgeon, flight navigator. The men completed decades of service in locations all over the world, from Southeast Asia to Europe to bases across the U.S., and many continue to serve as volunteers knitting hats and blankets for the USO and visiting with patients at the VA hospital. Many were excited for the chance to share their story and have Jewish veterans in the spotlight.

The day’s agenda touched on a wide range of topics and issues concerning veterans, seniors, and Jewish interests: volunteering for a Jewish hospice program; participating in upcoming Veterans Day events; debating the Mt. Soledad cross; and coming up with ideas for fundraising, increasing awareness and growing the post’s membership. The 239th birthday of the Marine Corps prompted one member to tell a classic veteran joke that made me–the uninitiated–laugh, and elicited groans from everyone else: “There are only two branches of the military: the Army and the Navy. The Air Force is a corporation, and the Marine Corps is a cult.”

After the ceremonial closing prayer and salute, the veterans disbursed to go about their Sundays, looking forward to the next meeting which would include candle-lighting and latkes for Hanukah.

When asked about goals for 2015, Captain Margolis said Post 185 hopes to “increase active membership, continue to conduct our annual cookout at the airport with the USO, and enhance the “Gift for a Yank” program at the VA hospital and Veterans Village in San Diego.”

To support the Harry Apleman & Arthur Towne Post 185 in San Diego, and for more information, visit Jewish War Veterans of the USA at jwv.org.

From abortion to conversion