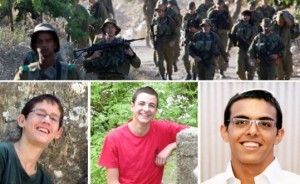 On Thursday Israel released the photographs of two Hamas operatives, Amer Abu Aysha and Marwan Kawasme, identified by the IDF as the ones who grabbed three of our Jewish children two weeks ago. All we have to know about the values of these two men can be summarized by the comment of Abu Aysha’s mother – that if her son did take part in the kidnapping, she was proud of him and hoped he would continue to evade capture.

In truth we already knew the faces of the kidnappers: First and foremost – Khaled Mashaal, Hamas political chief, who weeks after calling for such action, openly blessed the abductors of the three “soldier settlers,” as he referred to the teens, Gilad Shaar, 16, Naftali Frenkel, 16, and Eyal Yifrach, 19.

But there are others who deserve to have faces on Wanted Posters: All of the political, media, educational and religious functionaries of the Palestinian Authority who daily inculcate into the minds of children as young as three, that their Jewish neighbors are aliens; that there is no truth to Jewish claims to a 3,500 year-link to The Holy Land; that Israeli soldier “occupiers” should be viewed and treated like Polish patriots viewed and treated occupying Nazi soldiers during World War II.

So what is Israel to do?

During these horrific two weeks, Israeli forces have pulled out all stops to identify the kidnappers and to bring the boys home. But they also had another goal: To signal to Mashaal and other professional thugs masquerading as “political leaders” that there will be no more Gilad Shalit scenarios. Quite the contrary. Since the abductions, over 50 of those released for Gilad are back in Israeli jails and Hamas’ West Bank infrastructure has been significantly degraded. Mashaal and company know that Israel has other means at its disposal.

And what about us?

Jews around the world, whatever their political affiliations should continue to back Israel’s right to do whatever it takes to find our boys. That includes rejecting the cacophony of lectures in morality from self-appointed secular priests led by NGOs like Human Rights Watch who even after the kidnappings have the chutzpah to warn Israel about it can and cannot do to defend herself from such barbarism.

We should take note of who stands in solidarity with us in this time of distress and who couldn’t care less. As Israelis stand in prayerful vigil for their loved ones, European countries offer little by way of solidarity with the families but continue to rail over those “illegal” settlements. While many of our Christian neighbors have joined us in prayer, Presbyterians at the PCUSA convention voted overwhelming last week to “review” the “Two State Solution”, positioning themselves as frontline actors in the next international drama calling for the end of the Jewish State altogether.

Meanwhile, as Jewish groups from ZOA to J Street rage at one another over the future of the Jewish State, we should all reflect on this point:

These kids all live in Gush Etzion. The world long ago forgot and we must always remember that Jews legally bought the plots of land that today constitute Gush Etzion before there ever was a State of Israel. Those pioneers from Europe and a few from America displaced boulders and a few stray goats — not Arabs — when they built their communities. The slaughter of those Jewish pioneers after they had surrendered to the Arabs who overran Etzion during the War of Independence raised as much of a fuss in Europe back in 1948 as the kidnapping of three kids from the Gush has generated today.

It is not their presence in Gush Etzion that is a barrier to peace, but the praise of Abu Aysha’s mother for her son’s brutal abductions.

There remains one thing all Jews can do—continue to show solidarity with our missing kids. In the last 10 days, I chanted Tehillim in Johannesburg, Capetown, Durban, Chicago, and Los Angeles. May the spiritual solidarity that binds us together as one family, unleash a miracle from the Merciful One and may it send a powerful message of Jewish solidarity to a largely uncaring world. 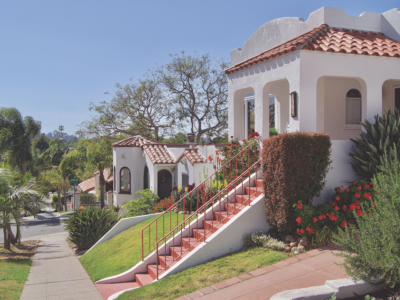