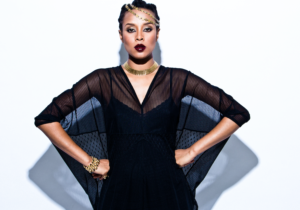 Any story where the words “Rabbi”, “Bob Dylan” and “Summer of Love” intersect, is sure to stop anyone on their tracks. Moreover, if the story is true.

Soul Doctor tells the incredible real-life story of Shlomo Carlebach; aka “The Singing Rabbi,” and his unlikely journey from pre-World War II Germany to performing on the world stage with legendary artists such as Nina Simone, the Grateful Dead and Jefferson Airplane. This, while becoming the founder of a commune-like synagogue in San Francisco and turning himself into one of the most prolific musical artists of the 20th century. Stemming from a smash Broadway hit, an entirely new production will debut in San Diego this April, at the Lyceum Theater.

We had the pleasure of talking with the internationally acclaimed director Gabriel Barre, the force behind this electric new production. Barre boasts an impressive list of Broadway and Off-Broadway shows, such as Amazing Grace, The Wild Party, the world premiere of Stephen Schwartz’s Magic to Do, and the Mexican premier of Billy Elliot.

Our conversation touched on such topics as interracial relationships, the importance of musical theater and his fantasy of moving to San Diego. Here are some highlights of our conversation.

L’CHAIM Magazine: How will this iteration of Soul Doctor be different from the Broadway show?

Gabriel Barre: The Broadway production was choreographed and conceived to be a big Broadway production. This is a more of a theatrical piece. In our production, we wrote the story and the script to focus on the struggle between Shlomo and his father, which is really the struggle between the old and the new ways; between the Old Country and the new one. And rather than telling Shlomo’s story chronologically, we are placing the show in San Francisco, at The House of Love and Prayer during its heyday.

L’CHAIM Magazine: What will this experience be like for the audience?

GB: The entire show will have the fantastic atmosphere of a threshold experience, where the audience is brought into the environment, and participates as they are entering the theater. But when Shlomo’s father makes a dramatic entrance and calls Shlomo’s loyalty to his faith and to his culture into question, the show becomes sort of a struggle or a debate about what the best way is to perpetuate and build a religion in a new country, and the audience becomes a judge and jury, and eventually comes to realize these are not easy questions.

L’CHAIM Magazine: I can see how this show will be especially attractive to our Jewish readership, but what do you think is its universal appeal?

GB: The show I should stress is, like Sholmo, a “show-and-think,” which audiences of all religions and backgrounds will appreciate in many, many, levels. It’s a wonderful family drama, with wonderful music of course, played by a cast of actors-musicians. And that is the other difference between the Broadway show and this one. In our show, every cast member will be on stage the entire time, and there is no separation between the actors and the band. It’s an exciting show which again, ends with an interactive experience.

We are very excited to bring this show to San Diego first, and then to Los Angeles and Jerusalem.

L’CHAIM Magazine: Is Shlomo’s message still relevant in our times?

GB: There could no better time than today for Shlomo’s message of inclusiveness, tolerance and love. The events that are happening everywhere around the world, but also in our country and the way things are splitting is so polarized — Carlebach’s message being that we cannot possibly progress as a civilization unless we respect each other and try to see things in the perspective of others, and the willingness to do so — it seems to me this is the perfect time to be reminded of this.

Who was Shlomo Carlebach?

Shlomo Carlebach was born in 1925 in Berlin, where his father, Naftali, was an Orthodox leader. To escape Nazi persecution, the Carlebach family moved to the Upper West Side in New York City. There, Shlomo joined a Yeshiva and became a Rabbi, like his father. However, an improbable friendship with Nina Simone, the “High Priestess of Soul,” changed his life.

Simone, whom he met at a Club in Greenwich Village, introduced him to gospel music and jazz. She also showed him the parallels between the prosecution of the Jews in Europe and that of her people in the U.S. At those clubs, Carlebach also met Bob Dylan, Pete Seeger and other folk singers, with whom he would eventually share the stage. These artists were so impressed with his talent and philosophy pf peach and love, that they helped him get a spot at the Berkeley Folk Festival in 1966.

After his appearance in the Festival, Carlebach decided to remain in the Bay Area. His goal was to reach out to what he called “lost Jewish souls” or runaways and drug addicted youths. He founded “The House of Love and Prayer.” where his following grew.

Through his special style of enlightened teaching, his music, and inspiring story-telling, he encouraged disenchanted Jewish youth to re‐embrace their heritage. Thus, he became instrumental in the beginning of the Baal Teshuva (“returnees to Judaism”) movement.

Reb Carlebach traveled the globe for more than 40 years, performed for millions of people and recorded more than 25 albums. His songs with their message of hope and love have touched the hearts and souls of people everywhere.