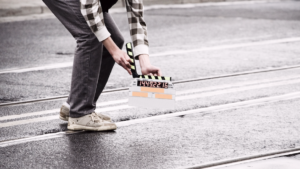 A lot of work goes into the San Diego Jewish Film festival year after year. And none of the films or events happen overnight, as anyone involved with the Lawrence family Jewish Community Center’s Center for Jewish Culture (the leading force behind the event) can attest to. Festival founder Joyce Axelrod spoke to us last month about her love of film, and the Joyce Forum — a juried competitive program of short films — named in her honor as part of the fest’s annual programming since 2003.

L’CHAIM: What was the impetus behind starting a film festival in San Diego?

JA: 28 years ago, my friend Lynette Allen, was appointed to be the Cultural Arts Director of the JCC. She asked me to help her with a film series [and the rest is history]. That film series turned out to be the wildly popular San Diego Jewish Film Festival!

L’CHAIM: Have you been involved in film throughout your life?

JA: Film was never that important until I started helping [Lynette]. I was absolutely hooked by being able to view films from all over the world and program them for our festival. It’s a very empowering thing to try to select films that you think an audience of various ages and sensibilities might like. I did that for 10 years until Judy Friedel became the Chairperson of the San Diego Jewish Film Festival. After that, there were several other devoted chair people: Fran Ginsburg, Helen Fleming, Saundra Saperstein and now the great Chris Fink to name some. It’s almost a full-time volunteer job to be chairperson.

L’CHAIM: Your specialty this year is short films, or “shorts” — what about them is so exciting to you?

JA: I have been programming a shorts day, the Joyce Forum day of short films, for about 10 years. I love shorts, always have! Being a good short filmmaker is no easy task. You have to present a well-crafted story in less than 30 minutes.

Christina Fink is the Chair of the San Diego Jewish Film Festival. In her second year in this leadership position and her tenth year on the feature film selection committee at the JCC, she and her team of six other curators watch and evaluate about 300 feature films from March to October, to arrive at the collection which will be in the festival.

But when she is not watching and selecting films for the festival, Christina has another passion, which brings film to another population — inmates at the Vista jail. Every week, she goes to jail and teaches film history, film theory, and film evaluation to 100 inmates.

Fink is also is the substitute teacher for the GED class at the jail, and through that position, met counselors implementing new programming. Fink suggested film appreciation as a vehicle to work on critical thinking skills.

“This was an experiment that simply worked out,” she says. “The men love the films, and have learned how to discuss a movie as one would a book.  Their observations and commentary expand every week, and I know that they keep talking about the films after I leave.”

In her fourth year of her program, she collects titles under a monthly theme and this enables the group to compare and contrast the films within a certain range of discussion. Examples of such monthly themes include:  Hitchcock, Food, Thrillers, Comedy, Film Noir, Magic and Magicians, Dysfunctional Families, and the Power of Music, to mention a few. She even has some older titles from past SDJFF collections and has re-created a Jewish film festival one month to take the films inside.

“I guess this is my mitzvah,” she says of the work. “And how lucky I am that I can do it with film.”

The San Diego Jewish Film Festival begins February 7 with an underwriter-only preview night. Screenings and events open to the public run at various locations throughout San Diego County, February 8-18. The Joyce Forum will be held throughout the day on Feb. 12. For titles, show times and other programming, call the JCC Box Office at (858) 362-1348 or visit www.sdjff.org.