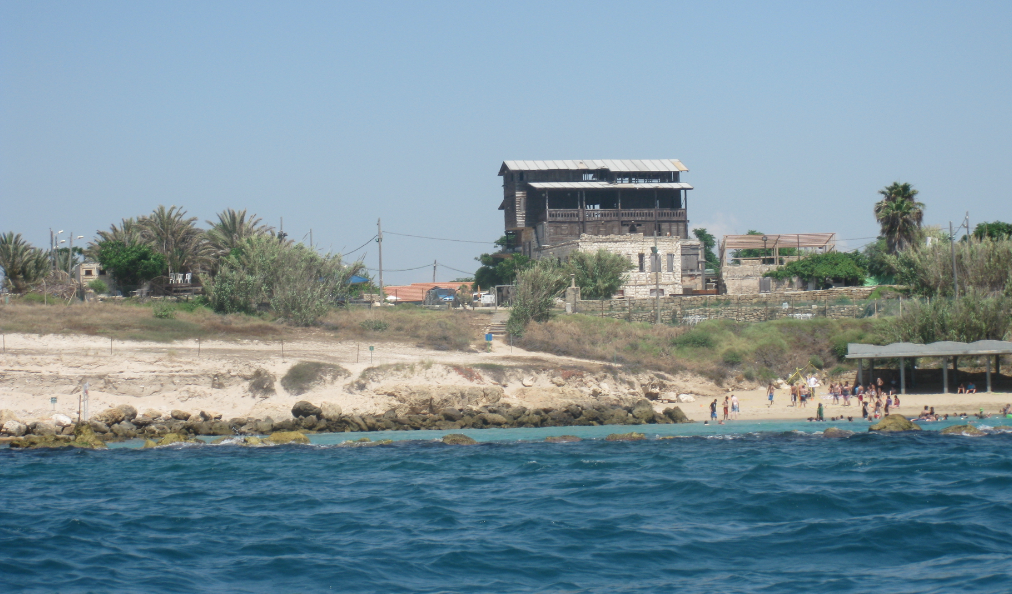 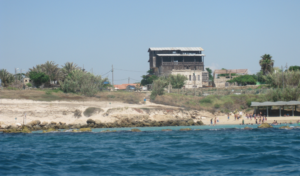 When shooting the movie Exodus, Paul Newman was a frequent visitor in Achzivland, and Rina Avivi seems to be proud of it. Sophia Loren, Brigitte Bardot and Bar Refaeli also apparently got their summer tans in this remote and idyllic bay situated only a stone’s throw away from the Lebanese border and Nahariya, Israel’s northernmost city.

“I met Sophia when I just moved to Achzivland. She taught me how to make real good spaghetti,” recalls the 70-year-old Avivi, who starts laughing.

It comes as no surprise that the rich and famous gathered on this little stretch of beach to get a glimpse of this controversial place and its inhabitants. Nestled between the Mediterranean Sea and the green hills of the Galilee, about 15 kilometers (9.3 miles) north of Acre, lies the empire called Achzivland. Right behind a little blue, metallic gate appear several wooden houses, a wild arrangement of self-made cottages, a hut for passport control, an open-air parliament, boat docks and a museum. Numerous cacti pop out of the dry earth, with the smell of salt and fish sweeping over from the coast. It has been more than 60 years since the fisherman and former soldier Eli Avivi discovered this bay and founded his own micro-state spanning 3.5 acres, limited by the country road on the right and the ocean waves on the left.

Of course, the micro-state’s national anthem is the breaking of the waves. The flag shows a topless and jolly mermaid. Strictly speaking, Achzivland is a dictatorship. The president is elected by his own vote. By now, Rina and Eli Avivi are the only citizens. The nation seems to have lost its townspeople over the years. They came and left. But the first lady does not seem to mind.

“I’ve had enough encounters and experiences in my life. Now, I am fine with the ocean,” Rina says.

Micro-nations like Achzivland are the rural brother of the urban squat. People claim their right over a certain territory of land without the recognition of other states or the permission of a government. They rule it according to their own laws. The motivation of such settlers can be diverse. Some of them wish to live a political or ideological alternative. Others seek to escape property prices and tax laws. For some, it is pure entertainment, while others hope to create a space devoid of the law. For example, the Danish so-called Free State of Christiania in Copenhagen is famously known for its liberal handling of illegal substances; the Dominion of Melchizedek was founded for the cause of bank fraud and money laundering; and the Free Republic Liberland between Serbia and Croatia is home to the Tcheque Party of Free Citizens. There are hundreds of such utopian holds in the world, with fantastical currencies, elections, stamps, border controls and even their own languages. Sometimes they go unnoticed, and they are often tolerated by the regional authorities.

Originally from Munich, Rina Avivi arrived in Israel after the 1948 War of Independence when she was 5-years-old. She prefers not to speak about her family’s destiny.

“I met Eli when he was still living here all by himself. Nobody cared about this area. He sold fish to the Kibbutz I was living in at that time. To me he was a true Robinson Crusoe,” she says.

Rina was under 18 when the couple got married. Her older husband had already lived a complete and eventful life. During the British Mandate period in Israel, Eli was part of the Jewish militant underground organization Palmach, and after the founding of the state he served in the navy. He sailed on his own throughout the Mediterranean before discovering the bay of Achziv in 1952 and declaring it his property. He has now grown silent, as his hearing is impaired. Gently, he listens to Rina’s tales.

The first years on Achziv were peaceful. Everything in the young country of Israel was still developing. The majority of the 2,000 people from the formerly Arab village of Az-Zeeb had already left the stretch of beach during the 1948 war. Eli was all alone in Achziv. Nobody seemed to pay attention to him and his blonde wife.

But in the 1970s, Israeli authorities sought to build a highway and a national park right on the Avivis’ premises. The village’s last remains had to go, and only the mosque and the mayor’s house are left. The massive mansion in the middle of the estate is the former house of Az-Zeeb’s mukhtar (head of the village) and the current museum of Achzivland. Eli stood on the bulldozers demanding them to stop, Rina remembers.

“That’s when we started to speak about our own country. Our land in Achziv,” she says. In 1972, the couple ripped apart their Israeli passports and created new ones. “I designed the emblem all by myself,” notes Rina.

This protest caused the Avivis to be taken into custody for eight days. But the judges were faced with a curious legal loophole. Quite ironically, there was no Israeli law against the founding of a state or declaring land your own. As a compromise, the Avivis agreed to officially lease the land from the state. From squatters, they had turned into regular renters and state-owners.

“Since that day, they have left us alone,” says Rina, adjusting her blue sunglasses as two grey, scraggy dogs follow her movements with tired eyes. The only other time the refuge was disturbed was in 1982 during the First Lebanon War, when militants used the beach in order to land unnoticed on Israeli lands. “One time they even broke into our house,” says Rina. “Luckily, I was prepared. And I think they were so surprised to see a blonde women, barefoot and with a machine gun, that they left immediately.”

As a result, barbed wire fences and closed-circuit televisions were installed at every corner of the property. Achzivland suddenly had a proper border. The paradise had transformed into a fort. In Israel, you can become a hippie, but not without your gun.

Rina points to the sand-colored walls down at the beach, to remains of Phoenician graves. On the day of this reporter’s visit, a freshly married Arab couple in tuxedo and wedding dress is took pictures between the ruins. The Avivis’s property is a real treasure trove for any archaeologist. Everybody in history has been fighting about this little piece of land: the Canaanites, the Greeks, the Romans, the Crusaders and the pirates — they all settled here, leaving a rich selection of vases, tools, jewelry, inscriptions and busts. Eli is an archaeological enthusiast. All of his life, he dug up Achziv’s earth and stored his precious finds in his very own museum — an impressive collection without order, its content claimed by the state of Israel on several occasions.

Rina sighs. She tore a muscle in her knee, she says. The maintenance of the place is becoming too much for her alone. For about three years, Achzivland’s destiny has been solely in her hands. She is taking care of bureaucracy, tourists, gardeners, tours and construction workers. During the summer, which is the peak season for visitors, Achzivland can be packed with hikers, tourists, backpackers and other curious souls. But the ambiance of the 1960s and 1970s seems to have vanished.

“Most of them are coming with the car and only stay for one night. None of them take part long term,” Rina says. The days when Achzivland was a haven for all the strange and stranded characters are over. The long phase of reflection and the time of internal inventory has started, Rina declares. The next big project: writing memoirs and digitalizing all the pictures of visitors Eli has taken over the years. Rina wants to give her husband a place in his own museum, in his own history, she says, with the waves — Achzivland’s anthem — rumbling from afar.