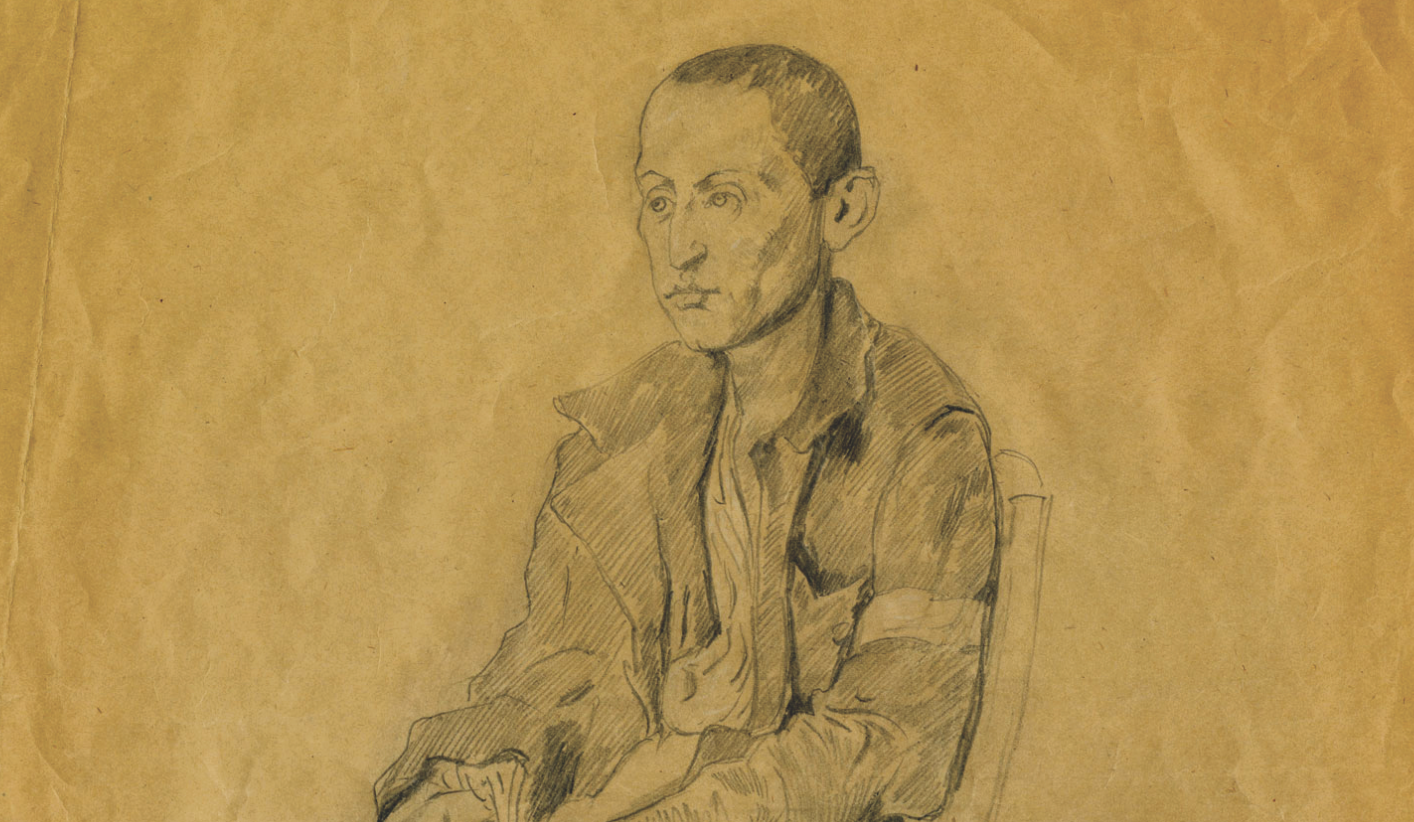 Artwork made by eyewitnesses who documented their experiences during and shortly after the Holocaust, often in secret and while risking their lives, are showcased in a new exhibition at the Museum of Jewish Heritage–A Living Memorial to the Holocaust in New York City.

The 21 works of art in the exhibit “Rendering Witness: Holocaust-Era Art as Testimony,” which opened on Jan. 16, were created in Czechoslovakia, Germany, Hungary and Poland during the Holocaust, primarily in ghettos and slave labor camps, or immediately after World War II.

The items on display include a child’s drawings and a U.S. Army soldier’s paintings; some of the more introspective pieces are portraits of fellow prisoners and views from cramped bunks. Visitors will view images by a deported cartoonist looking out a barrack window at an SS flag and what the children’s barrack in the Terezin Ghetto looked like from a child’s perspective.

These artists documented the Holocaust as it happened around them, providing a personal perspective to World War II not often seen, and while some of the artists survived, others perished in the Holocaust. Many of the drawings were created in secret—hidden under mattresses or in one’s prisoner uniform. The artists drew not only Jewish prisoners, but members of the SS, and risked facing harsh punishments, including death, if caught.

“Resistance during the Holocaust took many forms, each courageous in its own way: mental, physical, spiritual,” the museum’s president and CEO Jack Kliger said. “The choice by many victims of the Nazis to document their experiences through art was a form of resistance, too, and it was one that left a critically important set of records for future generations.”

Fourteen of the pieces in the exhibition have never been on display before, and all items except one are curated from the museum’s collection of more than 380 drawings made during or right after the Holocaust.

“Our goal is to tell the story of the Holocaust through the words and objects of the Jews who lived through the Holocaust,” the exhibition’s curator, Michael Morris, said. “I hope that this exhibition reinforces that goal, but this time, focused on the art, biographies of those who produced it, and the contextual history of what they were living through.”

Kliger added that “since we opened our doors in 1997, the museum has been committed to telling the history of the Holocaust through the lens of the victims and survivors, rather than the perpetrators. ‘Rendering Witness’ is a wonderful reflection of that principle. As we look to the decade ahead, that commitment to our forebears will remain a constant, even as much else changes about the way we present the Holocaust to younger generations.”

Eleven of the artworks were made by Jewish prisoners interned in Terezin, some of whom were professional artists assigned to the ghetto’s Technical Department, which made plans and drawings of Terezin for official use, or the Workshop for Arts and Crafts and Utility Painting. Their positions gave them access to art supplies.

Kantor, a trained artist, was a survivor of the Terezin Ghetto and Auschwitz, in addition to Schwarzheide—a sub-camp of Sachsenhausen, north of Dresden, Germany. He memorized scenes that he witnessed during the day and then drew them in the barracks at night. He was also shown kindness by a Jewish physician assigned to the Auschwitz camp infirmary who allowed him to draw there and gave him a small watercolor set, though putting them both at risk of severe punishment.

Kantor continued to draw at night while at Schwarzheide, but destroyed most of his drawings immediately after creating them, fearing punishment by the Nazis. Three of his works are displayed in “Rendering Witness” alongside an enlarged page from the sketchbook he filled during his time in the Deggendorf Displaced Persons Camp in 1945.

Weissova, now in her 90s and a practicing artist living in Prague, was 12 when she was sent to the Terezin Ghetto with her parents. She brought art supplies with her, and after she smuggled her first drawing, a snowman, to her father Otto, housed in a different barrack, he told her, “Draw what you see.” Weissova listened and produced approximately 100 drawings, two of which are on display in the current exhibit.

“In this particular moment, it is important we revisit the testimony of those like Helga, who experienced anti-Semitism’s darkest chapter,” said Elyse Buxbaum, the museum’s executive vice president for strategy and development, at the exhibit’s press preview. “In a world of rising hatred and anti-Semitism, the museum is called upon to be bolder in our mission of education, preservation and outreach than ever before.”

Also featured are drawings by U.S. Army soldier Marvin Hayle, a member of the 104th Infantry Division that arrived at Nordhausen concentration camp, a subcamp of the concentration camp Mittelbau-Dora, in 1945 to find very few prisoners and thousands of death bodies. Shocked by the sight, Hayle drew what he saw.

Before deportations, some artists entrusted their artwork to loved ones. Ahead of her deportation to Auschwitz, Weissova turned over drawings to her uncle, who hid them behind a wall in the Terezin Ghetto. They were given back to her after the war.

Peter Loewenstein gave a portfolio of 70 drawings to his mother, but he, on the other hand, was never able to retrieve them. Loewenstein was deported from the Terezin Ghetto to Auschwitz in 1944, where he was murdered at the age of 25.

His sister, the only surviving member of his family, recovered the artwork after the war.

One of Loewenstein’s pieces, titled “Eight men in coats with stars,” is the enlarged image that opens the exhibit and was produced the same year as his deportation to Auschwitz.

For both Kliger and Morris, the image stands out among the artwork in the exhibition. It “conveys the weight of the Holocaust without showing anything overly graphic,” said Morris.

Kliger added that “Loewenstein created 70 drawings in ink and watercolor while he was imprisoned in Terezin. … This drawing is one of his most striking. Without being graphic, it captures so much of the fear and sadness that characterized the Holocaust.”

“Rendering Witness” follows last year’s chilling exhibit, “Auschwitz. Not long ago. Not far away.” That display, which runs through August, outlines the transformation of Auschwitz from a Polish town (Oswiecim) into the largest documented mass-murder site in human history. Kliger said, “We must continually tell the history of the Holocaust in new and different ways, and these two exhibitions on display provide meaningful contrasts and connections.”

Morris said at the press preview, “While curating this exhibition, my mind was on the artists and the historical contexts through which they lived, but … this exhibition — like all exhibitions, educational initiatives and public programs at the Museum of Jewish Heritage – A Living Memorial to the Holocaust—stands against and educates about the dangers of anti-Semitism, racism, bigotry, of any kind and from any source. This is an important facet of our work.”

The opening of the exhibit follows the recent announcement by New York Gov. Andrew Cuomo about the museum’s expansion so that it will become a “learning destination for school children across the state” and help address the “disturbing number of anti-Semitic and other discriminatory attacks in New York.” Additionally, just this week, it was revealed that the Department of Education has teamed up with the museum to provide eighth- and 10th-grade students from Brooklyn neighborhoods of Williamsburg, Crown Heights and Borough Park free field trips to the cultural institution in an ongoing effort to combat anti-Semitism.

Kliger said “[Holocaust Remembrance Day] certainly provides a meaningful backdrop against which to consider the themes presented in ‘Rendering Witness,’ and an important moment to revisit the history of the Holocaust and all that has happened in the 75 years since. The resurgence of anti-Semitism here in New York and around the world gives these pieces of art a new type of resonance.”

“Rendering Witness: Holocaust-Era Art as Testimony” is open through July 5 at the Museum of Jewish Heritage–A Living Memorial to the Holocaust, 36 Battery Place, New York City.