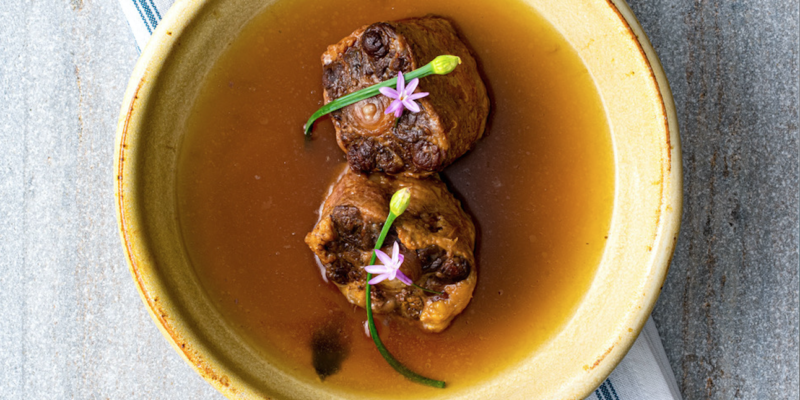 Of the many wonderful things to be found in Spain, the traditional home of Sephardic Jews — including the architecture, art, music, and fashion — the greatest has to be the food.

My favorite tapa on our trip to Seville was a very simple, very elegant, and deeply flavored little bowl of oxtail stew we tasted in Santa Cruz, Seville’s old Jewish Quarter. In addition to being the home of tapas, Andalusia is also the home to bullfighting. One tradition in Spain is that wherever there’s a big bullring, there’s a restaurant that serves the bull’s tail (the rabo of the toro) after the fight. Braising the oxtails in one of Andalusia’s other great exports (sherry) brings out the savory succulence and incredible tenderness that time and patience reveal in this seemingly tough ingredient. The chive buds —an ingredient readily available at Asian markets — are an elegant and tasty garnish. They are, however, purely optional.

For the contemporary version I braise the oxtails in the traditional ingredients but, after refrigerating the oxtails in the braising liquid overnight, I defat then strain the broth before clarifying it. The result is a clean and clear broth with dramatic oxtails and simple garnishes.