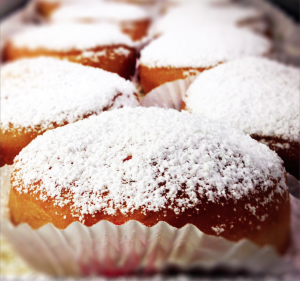 One of the best-loved foods of Chanukah, Sufganiyot, is the king of donuts, and San Diego is home to some great options during the holidays and year-round. A Sufganiyot [plural: SOOF-gone-ee-AH] is a jelly filled donut sprinkled with sugar. The first known recipe for the Jelly donut—Gefüllte Krapfen—appears in 1485 in a German cookbook, Kuchenmeisterei or Mastery of the Kitchen.

Bakers today fill their donuts with sweet jelly and crème mixtures. But, because sugar was costly and rare, early pioneers filled theirs with savory stick-to-your-ribs fillings. They used mushrooms, meat, fish, and cheese to concoct something comparable to a pot pie, ravioli or a calzone—only fried. These “donuts” grew in popularity, and the cold climate certainly didn’t hurt.

From the early 1800s, jelly donuts were known as Berliners. Later terms like Bismarck, Paczki, and simply Krapfen became popular. Polish Jews fried them in chicken fat instead of lard or oil. By the end of the nineteenth century, the jelly donut became a favorite Polish Chanukah dessert. Another name still used by Australian Jews today is Ponchik. The name “Sufganiyot” comes from the term for “spongy dough” mentioned in the Talmud. In 1920, the Israeli Federation named the Sufganiyot a Chanukah dessert because of the degree of difficulty in making them promoted the creation of jobs.

Celebrate Eight: Our Guide to Some of the Best Donuts in San Diego

No guide to donuts for Chanukah would be complete without the presence of at least one Jewish Deli on the list, which is where our journey begins:
D.Z. Akins—SDSU College Area

This New York-style delicatessen, restaurant and bakery has been going strong for 34 years. Considered by some to be the best Jewish deli in San Diego, D. Z. Akins offers Sufganiyot during Chanukah. They also offer tasty latkes and a full Chanukah dinner menu—great for moms who want a break from cooking to enjoy time with to visit with family. Lots of places offer donuts, not many tailor their menu to this wonderful Jewish celebration.

Open 24/7, Mary’s has been a Santee institution for 26 years. San Diegans from all over the county swear by Mary’s Donuts. One YELP enthusiast admitted to plying coercion with coworkers to pick up fluffy treats on their way into the office.

“The only thing I could think about was how many times I needed to work out before I could come back to try other flavors guilt free.” —Darren from SanDiegoFood.net.

Donut Bar made it onto the USA Today 10 Best Donut Shops in the USA list. They also made it to number 84 on Grubstreet’s 101 Amazing Doughnut Shops Around America. This is not your average donut shop. The Donut Bar changes their menu daily, and their offerings are so unexpectedly good: raspberry pistachio, crème brûlée, chocolate peanut butter cup, maple bacon (oops! sorry kosher eaters) and strawberry split. Donuts aren’t just for breakfast here—they’re also for dessert. But you better buy them early because the Donut Bar closes once they sell out—usually by 1 p.m. Caution: don’t try to call. They’re not good about checking voicemail messages. You’re much better off emailing.

VG Donuts—Cardiff by the Sea

“VG” stands for very good, and they are what they say they are. VG has been around for 45 years. They’re winners of the 4th Annual “Taste of Cardiff,” San Diego Magazine Readers Poll for Best Donut in San Diego, and two-time runner up for 10news.com’s, A-List for Best Bakery. They offer classic donut fare but their quality and service gets them onto San Diego top lists all the time.

Flavors change here every day. Donut Panic is a family business. Linda, the vegan donut chef, and her father, offer delectable treats for vegan and non-vegan eaters alike. Their vegan donuts are available Wednesdays, Thursdays, Saturdays, and Sundays. Donut flavors include: Earl grey, chocolate espresso almond, maple “bacon,” and something citrus-y! They have rose-cardamom in honor of their Persian roots. But Donut Panic is all American. They offer a Beer and Donuts Happy Hour the last Saturday of every month at The Hideout on El Cajon Boulevard. They also work closely with Dr. Bill Sysak from Stone Brewery & Bistro, and the beer-crafting program at SDSU. In case you were wondering, the name Donut Panic is actually an idea from one of Linda’s friends.

Executive Chef Sharon Wilson competed on the Donut Showdown. Tiger!Tiger! offers House-Made Donuts including their specialty, the Coconut-Glazed. And don’t laugh, they’re also into pairing donuts with an assortment of craft beers. They even have Donuts & Beer as a distinct item on their menu.

The beer-donut pairing should not come as a surprise to many L’Chaim readers, as some of the old country Sufganiyot recipes contain beer.

Azucar is the fulfillment of a life-long dream for Le Cordon Bleu chef Vivian Hernandez-Jackson. She offers a donut muffin, and combines her culinary skills with the fresh ingredients she came to love growing up in the Cuban culture of Miami. This shop made it onto the list because of the quality of her offerings—not just because of their donut muffins.

Peterson’s is a family-run business with a friendly atmosphere. In 1981, Ralph and Vera Peterson came to San Diego County to have a look around. They were visiting relatives in the area and couldn’t get over the great weather. No strangers to the food business, since they owned a deli back in Croton-on-Hudson in New York called the Rockland Deli, they decided to set up shop here. They had five children. Ralph Peterson, the current owner, is their eldest. His niece also helps. Their big sellers are the simple Glazed Donut and Peterson’s Pillows—a croissant-donut hybrid. They sell out as soon as they put them in the in the case.

Before we say farewell, I’d like to propose one final thought. Perhaps the Sufganiyot has such a rich history because Chanukah is a time for family. It’s a time when people sit around the table, look into each other’s eyes, share songs, give presents, and share hearts. Our history is about us doing things together. The older generation passes wonderful things along to the next. It’s a tradition of love.

And, in San Diego all of this can be done outside on the patio because the weather’s so nice.

Rita Mailheau is a business writer specializing webhosting, cyber security and digital marketing.  She’s proud to have blogged for law enforcement and first responders trade journal back in 2012. She also loves to eat, fix bikes with her husband Michael, and read historical fiction. You can visit her website at ritamailheau.com.