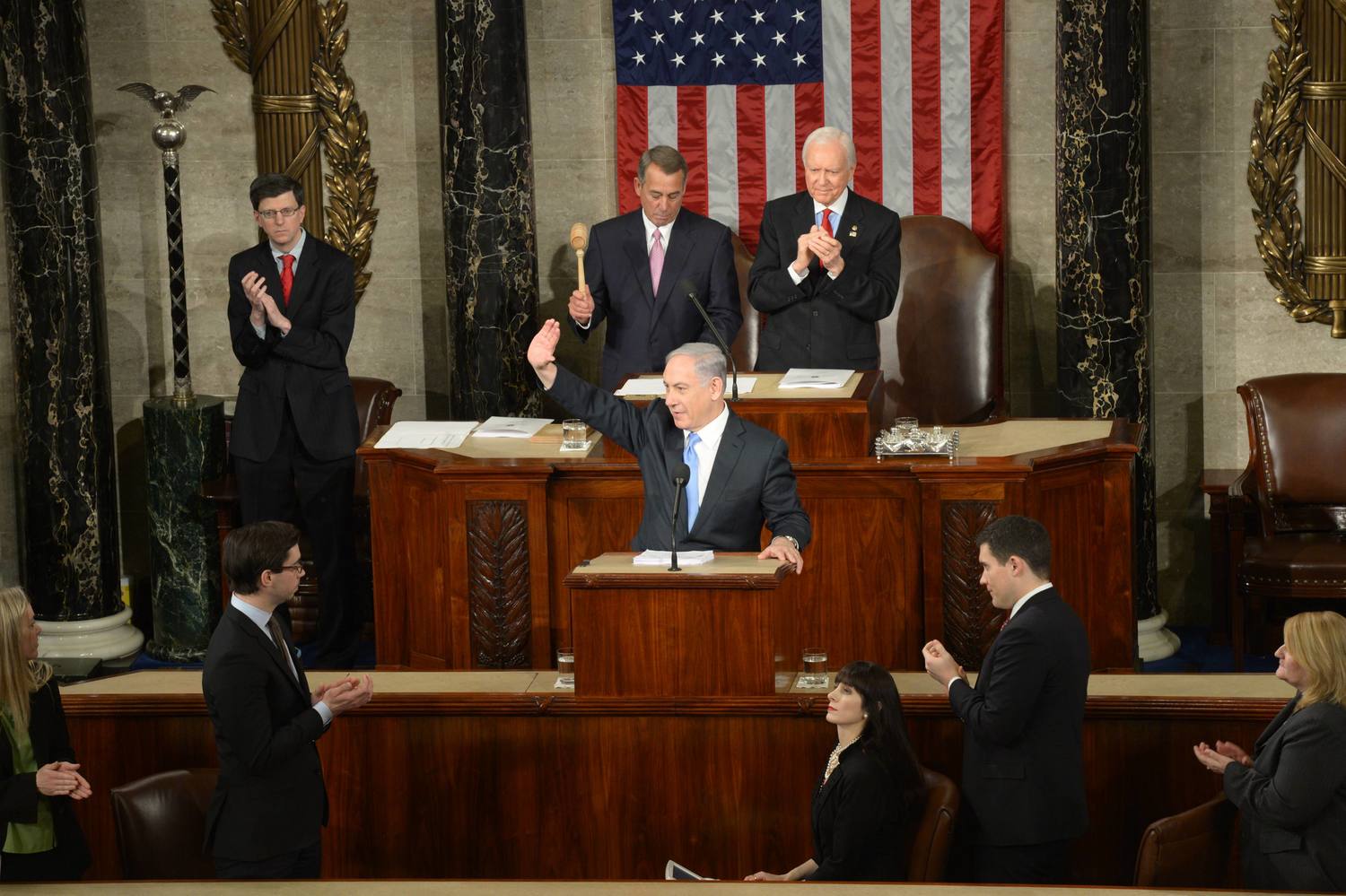 Israeli Prime Minister Benjamin Netanyahu waives to the crowd during his address to a joint session of Congress on Tuesday. Credit: Amos Ben Gershom/GPO. 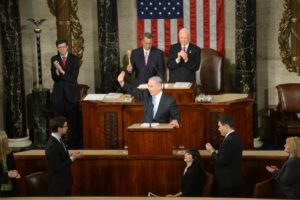 Israeli Prime Minister Benjamin Netanyahu waives to the crowd during his address to a joint session of Congress on Tuesday. Credit: Amos Ben Gershom/GPO.

In perhaps the most widely debated address ever given by a foreign leader to Congress, Israeli Prime Minister Benjamin Netanyahu described a “fateful crossroads” on the Iranian nuclear threat and said that the emerging deal between Iran and world powers is paving the way for a Middle East “littered with nuclear bombs.”

“This deal has two major concessions: one, leaving Iran with a vast nuclear program, and two, lifting the restrictions on that program in about a decade,” Netanyahu said in his speech to a joint session of Congress on Tuesday morning.

Netanyahu’s two U.S. speeches—Tuesday’s Congressional address and Monday’s speech at the American Israel Public Affairs Committee (AIPAC) conference—come against the backdrop of U.S.-Israel disagreements on both protocol and policy. The White House and some Democratic legislators have opposed Netanyahu’s Congress speech on the grounds that House Speaker John Boehner (R-Ohio) did not consult President Barack Obama about inviting the prime minister. At the same time, while the proposed Nuclear Weapon Free Iran Act of 2015 would impose new sanctions on Iran if the country does not reach a political framework agreement in its nuclear talks with the P5+1 powers by March 24, Obama has vowed to veto any new sanctions legislation that passes in Congress.

During his speech to AIPAC, Netanyahu declared that reports of the demise of the U.S.-Israel alliance are premature and wrong, and that the two countries “must always remember that we are family.” At the start of his remarks to Congress on Tuesday, the prime minister struck a similar tone, saying that the “remarkable alliance” between the U.S. and Israel “has always been above politics, and must always remain above politics.”

Netanyahu praised Obama for the support the president has provided Israel in areas such as security cooperation, intelligence sharing, and standing up for Israel at the United Nations. He also thanked Obama for assistance in lesser-known areas, such as U.S. support for Israel during natural disasters and during the siege on Israel’s embassy in Cairo in 2011.

“In each of those moments, I called the president and he was there,” Netanyahu said.

The Israeli leader thanked Congress for its support for Israel, including the funding of the highly successful Iron Dome missile defense system.

Moving to the topic of Iran, Netanyahu drew a parallel between the upcoming Jewish holiday of Purim—which commemorates the salvation of the Jewish people in ancient Persia—and the modern-day Iranian threat.

The prime minister said Iran is seeking to take over the Middle East, dominating four capitals in the region—Baghdad (Iraq), Damascus (Syria), Beirut (Lebanon), and Sana’a (Yemen)—and exporting its brand of jihad across the world.

While Netanyahu noted that the Iranian people are “very talented,” he said that in 1979, the country was hijacked by “religious zealots”—in reference to the Iranian Revolution of that year, under Ayatollah Khomeini.

Iran’s founding documents espouse the idea of “death, tyranny, and the pursuit of jihad,” Netanyahu said.

Netanyahu also took aim at Iran’s current president, Hassan Rouhani, who has been touted by some as being a moderate compared to his Holocaust-denying predecessor, Mahmoud Ahmadinejad.

The Iranian regime is “as radical as ever,” Netanyahu declared, saying that the country’s ideology is rooted in militant Islam.

Netanyahu cautioned against seeing Iran as an ally in the fight against the Islamic State, a Sunni Muslim terrorist organization that has conquered large swaths of Syria and Iraq and has been battling Iranian-backed Shi’a Muslim terror groups such as Hezbollah.

“The battle of Iran against ISIS (Islamic State) doesn’t turn Iran into a friend,” Netanyahu said. “When it comes to Iran and ISIS, the enemy of your enemy is your enemy.”

Addressing reports that the U.S. has cut off intelligence sharing with Israel on the nuclear negotiations between Iran and the P5+1 powers, Netanyahu highlighted two major aspects of the emerging deal with Iran that he said are already “public record.”

Netanyahu said the ability for Iran to retain its nuclear infrastructure in a deal is “dangerous” and could lead to a quick nuclear breakout capability. Secondly, he warned against the proposed lifting of restrictions on Iran 10 years after an agreement is signed.

“Not a single nuclear facility would be demolished,” Netanyahu said, saying that nuclear breakout time under the proposed terms of the deal could be less than a year, according to U.S. assessments. In a decade—what Netanyahu called “a blink of an eye”—Iran could produce “many, many nuclear bombs.”

Towards the end of his address, Netanyahu laid out three demands for Iran: stop attacks against countries in the region, stop supporting terrorism around the world, and stop “threatening to annihilate my country, Israel, the one and only Jewish state.”

Netanyahu called for a “better deal” than what is currently being discussed, saying that restrictions on Iran should stay in place “until Iran’s aggression ends.”

“A better deal that won’t give Iran an easy path to the bomb [is needed],” he said.

Netanyahu urged Congress to reject the reported parameters of the proposed deal with Iran.

“For over a year, we’ve been told that no deal is better than a bad deal,” Netanyahu said. “Well, this is a bad deal. It’s a very bad deal. We’re better off without it.”

Netanyahu said the world is at a “fateful crossroads” between a “bad deal” that will lead to a nuclear Iran, and a second path that would prevent a nuclear-armed Iran.

Quoting the poet Robert Frost, he said, “The road less traveled will make all the difference in terms of peace.”

Netanyahu concluded his speech by quoting Moses, whose portrait appears inside of the U.S. Capitol.

The build-up to Netanyahu’s address was unprecedented, with nearly every major broadcast news network or newspaper devoting considerable coverage to the event, and tickets in high demand.

“The tickets are hotter than fresh latkes,” U.S. Sen. Chuck Schumer (D-N.Y.) told the New York Times. After the speech, Schumer said in a statement that Netanyahu’s address “was powerful, particularly the recitation of Iran’s perpetration of continued acts of terrorism.”

Pastor John Hagee, founder and chairman of Christians United for Israel, said America and the world “had the opportunity to experience a Churchill moment with Prime Minister Netanyahu of Israel.”

“In the dark days of World War II, when Hitler and the Nazis were destroying Europe, Winston Churchill addressed the British making this statement: ’You ask what is our aim. I can answer in one word: It is victory… for without victory, there is no survival,’” Hagee told JNS.org.

“Today, Prime Minister Benjamin Netanyahu made it very clear that Iran must not be allowed to obtain a nuclear bomb,” added Hagee. “To quote the prime minister, ‘no deal is better than a bad deal.’ This is the hour that America has heard the truth, and now we must respond with meaningful legislation to guarantee liberty for both Israel and America.”

U.S. Rep. Lee Zeldin (R-N.Y.), the only Jewish Republican in Congress, said in a statement, “The prime minister reinforced to Congress today that he does not oppose an agreement with Iran; he opposes a bad agreement. The Iranian regime has shown no indication that it’s willing to abandon its nuclear program. Iran continues to get by with billions of dollars in relief from sanctions, as they continue to successfully buy more time and continue to pursue nuclear capability.”

“Now is the time for members from both sides of the aisle to work together to strengthen our relationship with Israel, our strategic partner in the Middle East, a beacon of democracy, freedom and liberty in an area filled with darkness,” Zeldin said. “It is my hope that the Obama administration will start standing with our allies in Israel and stop protecting our enemies.”