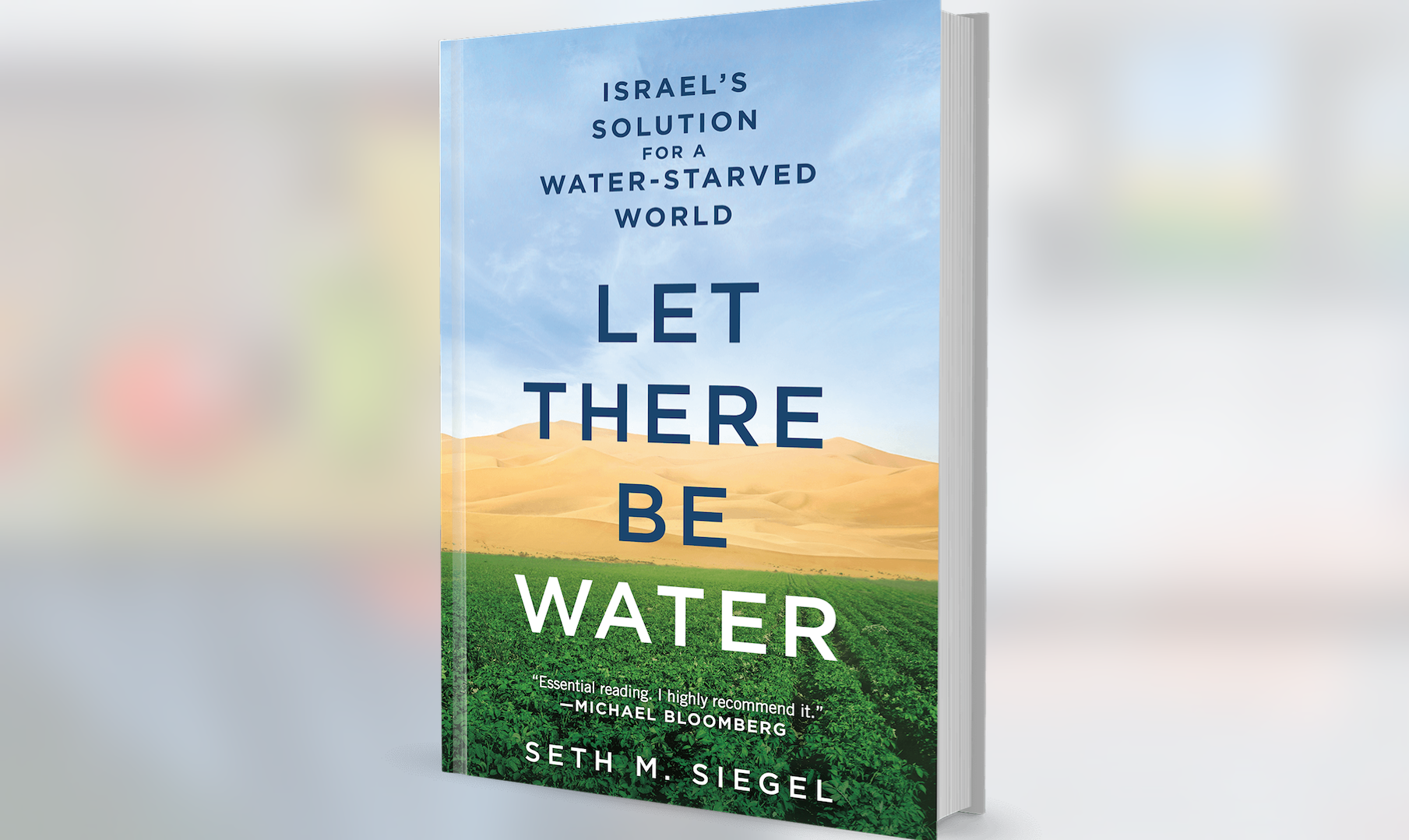 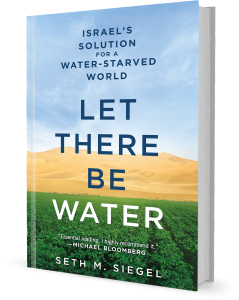 In a compelling new book, Seth M. Siegel, lawyer, activist, writer and successful serial entrepreneur illustrates the tremendous impact Israel has made and the vital role it continues to play for water conditions globally. With detailed research and hundreds of interviews, the book speaks to how Israel has combated and overcome her own water crisis, in the process assisting many other countries with water conservation and purification.

“Let There Be Water” is informative, inspirational and could well become recommended reading for students at all levels. There will soon be a book published for college students. Renowned environmentalist Robert Kennedy Jr. calls the book a “blueprint for the planet,” with Michael Bloomberg hailing this as essential reading.

Although 60% desert, Israel solved its water problem and has an abundance of water which is supplied to the Palestinians and the Kingdom of Jordan daily. Years ago prior to the current crisis, Israel managed Iran’s water system and provided education to countries such as China. Siegel chronicles the work of water innovators such as Simcha Blass, who revolutionized how we use water for irrigation with a drip irrigation system. During the 1930s, with the National Water Carrier Program, he pumped water to farms from the Jezreel Valley and with irrigation saved 70% of water. With development of large scale plans such as the “Fantasy Water Plan,” water was brought from the north to the south, trapping and collecting storm water, treating and revising sewage for the health of the region and rivers and drilling into the aquifers. Today he is referred to as Israel’s “Water Man.” Previously, the flood irrigation system was used, losing about 50% of water.

Beginning in 2008, with the growing water crisis, Israelis were charged more for water as building infrastructure isn’t free and funds were needed to develop desalinated water plants. A “Save Water” campaign was developed where double the amount of water was saved as a result. Due to these strategies, consumers cut water use by 16% and farmers bought into the program immediately. By 2013, a savings of nearly 9 billion gallons was realized, water which was previously lost each year.

Additionally, Israel developed a brilliant process of growing plants, fruits and vegetables with less water. Global seed companies such as Monsanto, DuPont and others have R&D centers in Israel with joint ventures. Farmers have been given an extra allocation of 20% of treated water for every unit of fresh water they did not use and they signed up for the treated water. This has saved Israel tremendous dollars and greatly contributed to the amount of freshwater saved.

Jewish National Fund’s role in assisting Israel regarding water has been enormous. As JNF partnered with Israel and its farmers, their US branch and branches in other Jewish Diaspora countries raised funds from local donors to assist with between 30% and half of the total reservoir construction in Israel according to the book. Remaining funds needed to build the reservoirs were provided by the Israeli government, the Israeli office of JNF and farmers’ water co-ops.

When asked to describe the role of JNF and how citizens can help, Siegel responded: “JNF creates partnerships around the world. They build infrastructure and play an essential role broadly. Without JNF, Israel could not have gotten there nearly as fast.” He recommends donating funds to JNF and purchasing water certificates through them. He believes JNF is a good steward of funds donated to them.

Israel has always viewed water as a valuable, sacred resource and children are taught in elementary school the value of saving water through turning off water in the shower while soaping, shutting off the faucet while brushing their teeth and the importance of the dual flushing system for toilets. Siegel believes that part of the Israeli mindset is not to take water for granted. He believes people in Israel have a sense of limits, which helps to keep them from running out of water.

Concerning international relations with Israel regarding water, Siegel believes it will deepen as time goes by as Israel is the leader of excellence, the water world center and the center of water innovation. In 2014, California Governor Jerry Brown and Israeli Prime Minister Benjamin Netanyahu signed a cooperation agreement encouraging government, business and academic partnerships between Israel and California for the smarter use of water.

When asked if the water crisis is confined to a few states like California, Siegel replied is now in the western states in addition to the plains. He believes that it is dangerous to think of water as a free, limitless resource. Much damage is done by over pumping aquifers, not fixing broken municipal water infrastructure and not modernizing agriculture, in addition to not using water-saving technology, which is available.

Siegel believes Israel is a model for the rest of the world as they have the most sophisticated water resource management internationally. Management of water, he believes is apolitical. He recommends charging the real price of water, ensuring funds for technology and infrastructure. As citizens, Siegel believes we should pay for the water we use and we can have as much water as we want. He believes the water system should be price driven. Regarding a master plan for communities, he believes it is a matter of creating options. For instance, if we want green lawns then we need to pay for our water. Currently Israeli citizens pay ¾ of a penny for each gallon of water and this system can be applied elsewhere.

“Israel is a source of technology and opportunity with major past successes,” Siegel says. “Not everything Israel does is right for every country or community, but her problem-solving skills related to water, long range planning, educating people about water resources and conservation and utilization of water fees for water infrastructure and technological innovation are all relevant to people globally.”