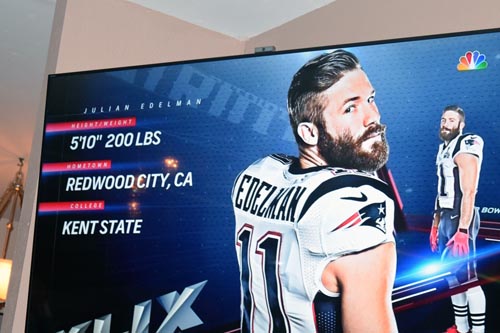 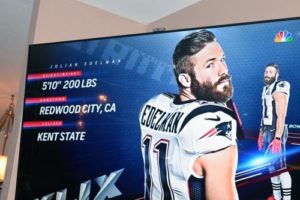 SAN DIEGO—Nearly one hundred million people reportedly watched Super Bowl XLIX on television at viewing parties similar to the one I attended at the home of my neighbors Bob and Alisa Lauritzen.  I don’t have to tell any of those mega millions that the 28-24 last minute victory of the New England Patriots over the Seattle Seahawks was an exciting affair, or that the decision of the Seahawks to pass in the final minute of the game, instead of trying to storm over the goal line with a running play, will long be debated. The fateful pass was intercepted and the Patriots held onto their lead. A stunner.

But I thought I would note in this column why my fellow Jews were able to kvell and schep some nachas watching the game and its halftime entertainment, even if they weren’t particularly die-hard fans of either the Patriots or the Seahawks.  I’m writing this column from San Diego Chargers country, you see.

The touchdown pass that put New England into its final lead was a three-yarder thrown by Patriots quarterback Tom Brady to Julian Edelman, who is a member of the Jewish community. His father is Jewish, his mother Christian, and while most movements of Judaism say religion follows the mother, Edelman has said on an NFL Network interview that he considers himself Jewish – and that’s good enough for me!

During the game Brady threw numerous passes to Edelman, most of them short bullets that gained a few yards at a time, in contrast to Seattle quarterback Russell Wilson who more frequently threw long bombs down field which all the fans in the stands could watch and hold their collective breath waiting to see if they would land in the arms of players for the offense or defense. Most of the time, the Seahawk players were the ones who caught them.

Besides Edelman, another Jewish player on the Patriots team is Nate Ebner, a safety who has been known to receive punts from the opponents and run them far down field. But several times the Seahawks punted deep into the Patriots’ end zone, resulting in the Patriots having the ball automatically spotted on their 20 yard line to begin their drives.

Two other Jews with vital roles on the Patriots team are its owner Robert Kraft and his son, Jonathan, the team’s president. Throughout the game, television cameras flashed to them in their seats to show how they were reacting to key plays. Like all the other fans, there were times that they were jubilant, and times when they were frustrated.

The older Kraft has been active in Jewish charities, particularly in underwriting the Passport to Israel program for Boston area teenagers. He also underwrites Israel’s flag football league for women, and paid for construction of the Kraft Family Stadium in Jerusalem. A mensch in other words.

I missed the pregame ceremonies in which the Jewish singer Idina Menzel sang the Star Spangled Banner. During an extravaganza half-time show featuring singer Katy Perry, another Jew joined her for one number – Lenny Kravitz. Besides for his music, Kravitz is known and admired in the Jewish community for his advocacy in behalf of his namesake uncle and other Jewish war veterans whose acts of heroism during World War II, the Korean War, and the Vietnam War might have been under-appreciated, because they were members of the Jewish minority.

In 2001, then Congressman Robert Wexler (D-Florida) wrote a bill which required the Department of Defense to reexamine the records of Jewish soldiers who were honored with lesser medals, and determine whether non-Jewish members of the military had received the Medal of Honor for similar acts of bravery.

In the case of Kravitz’s uncle, he had been awarded posthumously the Distinguished Service Cross and according to the citation that accompanied it, he was the kind of guy the Patriots or the Seahawks would have liked to play defense for them.

According to the citation, on March 6, 1951 near Yangpyong, Korea, following two previous attacks by regular troops of the Chinese Army. “(T)he enemy launched a fanatical banzai charge with heavy supporting fire… When the machine gunner was wounded in the initial phase of action, Private Kravitz immediately seized the weapon and poured devastating fire into the ranks of the onrushing assailants…

“Upon order to withdraw, Private Kravitz voluntarily remained to provide protective fire for the retiring elements. Traversing the gun to the left to cover the infiltrating enemy and ignoring the pleadings of his comrades to fall back, he fearlessly maintained his position. Detecting a column of Communist troops moving toward friendly positions, he swept the hostile soldiers with deadly accurate fire, killing the entire group. His destructive retaliation caused the enemy to concentrate vicious fire on his position and enabled the friendly elements to effect a withdrawal.”

American forces subsequently retook the ground where Kravitz had made his stand. Kravitz, 20, was found dead next to his gun. According to the citation, “numerous enemy dead lay in and around his emplacement.”

It took years for the review and evaluation to occur, but in 2014, President Barack Obama conferred the Medal of Honor posthumously on the singer’s uncle. It was accepted by the singer’s sister.

So, watching all these folks on the most watched television show ever – the Super Bowl –was a time for pride for my wife and me as we sat in the Lauritzens’ living room with their family members and friends. As the Lauritzens’  guests included fans of both the Patriots and the Seahawks,  moaning and cheering could be heard in their TV room as the close game twisted and turned.

At our request, our son-in-law, Shahar Masori, whipped up some of his thick hummus, seasoned with a little extra garlic for Nancy’s taste, so there was even a bit of Middle Eastern flavor to this all-American sports occasion.

Footballs decorated the table where varieties of food were laid out for the munching pleasure of the Lauritzens’ guests – and watching a nail-biting football game can make you hungry. A cake was decorated with a football motif, and mylar balloons bearing the names of the Seahawks and the Patriots added to the late afternoon’s dector.