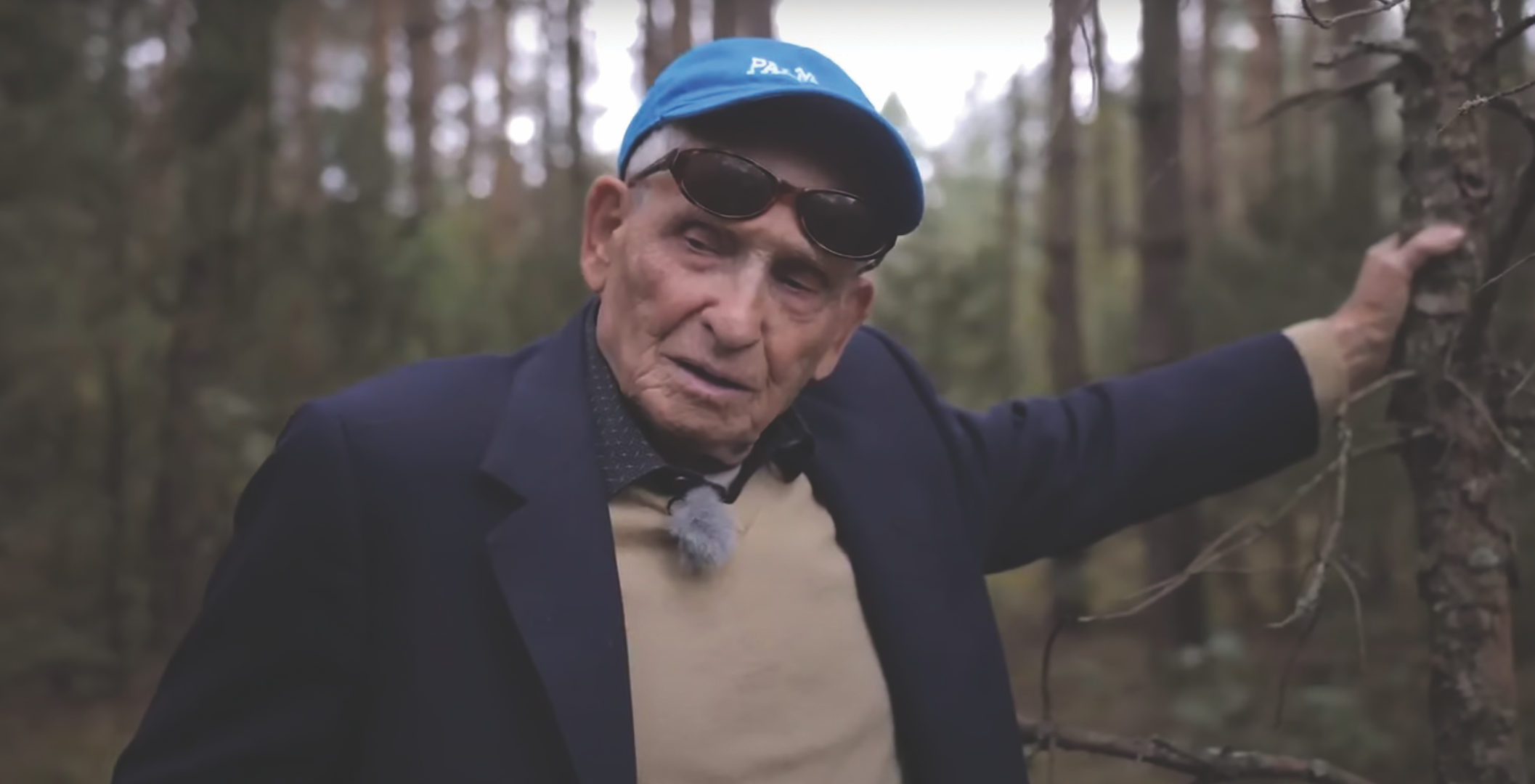 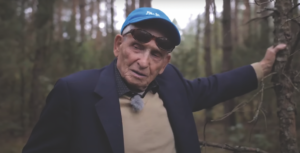 Aron Bielski is the youngest and last living member of the Bielski brigade, which he founded along with three of his brothers. Their activities have become widely known as one of the largest partisan groups that rescued Jews during the Holocaust.

He was born on July 21, 1927, into the family of David and Beila Bielski, who had 10 sons and two daughters, in what is today Belarus. According to Aron Bielski, they were the only known Jewish family in the Belarusian village of Stankiewicze. His parents and two of his brothers, Yankel and Avraham, were killed by the Nazis and buried in a mass grave on Dec. 5, 1941.

The story of the Bielski brigade — led by the brothers — that fought Nazis and other pro-German forces while rescuing escapees from their grips has been written about over the years in a number of books, as well as portrayed in the 2008 feature film “Defiance,” starring Daniel Craig and Liev Schreiber (George MacKay played Aron).

After World War II and the Holocaust, during which his brothers saved more than 1,200 Jews, Aron Bielski moved to British Mandate Palestine and served in Israel’s army during the 1948 War of Independence.

He then moved to the United States, where his brothers and the rest of the family lived, changing his name to “Bell.” He and his first wife, Judith, had three children.

Today, Bielski, 92 and the grandfather of 12, lives in Florida with his wife Henryka, 80, who was born in Poland in 1939 and is also a survivor.

JNS talked with Aron and Henryka Bielski by phone on April 12. The interview has been edited for brevity and clarity.

Q: What was your role in the Bielski brigade?

Aron Bielski: To pick up children in the ghetto. For some reason or another, I never wore a yellow Star of David. I don’t know why, maybe I was stupid. By the help of G-d, I don’t know why every Jew was wearing the star. Therefore, it gave me the opportunity to walk into places where no Jew could. I lost two brothers because they had the Star of David.

It is very hard to be a good Jew, but at the end, it is indescribable how much rewarding it is.

Don’t think for a moment that I was a hero in any way or matter. This was pure luck because there were stronger people than me, and they were butchered. But I was lucky enough to prevail.

Q:  What was your relationship with your brothers before and after you went into the forest, becoming partisans and rescuers?

AB: I was always lucky and privileged to have brothers. Asael was probably the most powerful individual that I ever met in my life. Smart and a very powerful, strong individual. With the help of G-d, because how smart could you be? You are nothing against the regular army that is working to destroy you. How smart can you be?

Henryka Bielski: The oldest brother, Walter, and [the second oldest] of the brothers, Nathan, went to America before the war. Yehoshua, a rabbi, went to Siberia during the war. A sister, Tove, lived with her husband, Avraham, in another village but they joined her brothers in the forest.

AB: Life in the forest was great.

[There was] freedom. You saw the sunshine. All we needed was food, and we [felt that we] won. If you wanted to sleep, you slept. If there was no bed, you slept on the snow. Whatever it was, it was. It’s hard to believe, but that’s what it is. I had a rifle, but I didn’t think I should be on the first line [of defense]. They wouldn’t let me. They protected me.

Q: How did you get food while in the forest?

AB: You went by people; some gave you, some didn’t want to give you, some we got by force. We got whatever food we could get. Believe it or not, there was some religious people who didn’t touch a piece of meat because it was not kosher. This I’ll never forget.

HB: They had potatoes, eggs and even killed a cow. In the summertime, the forest had fruit.

Q: Can you elaborate on those who wouldn’t eat the meat despite the dire circumstances?

AB: They would rather die than eat the non-kosher meat. They would take leaves from a tree and cook them. They did not eat non-kosher food. It’s something for the books.

Q: How was survival different as a partisan than other stories of survival during World War II and the Holocaust? Was there a different mindset?

AB: You’re a different person than if you were born in the city and never been to the woods. You’re afraid of animals, wild animals. We were only afraid of G-d himself.

HB: My mother survived with me, and we were not in the ghetto. The Polish army helped us. My father was in Auschwitz.

AB: And she also survived because she knew, G-d told her, that I needed a very good wife, a very good friend. She’s still here, believe it or not.

Q: How did you two meet?

HB: We met in the Catskills in Upstate New York in 1992 and got married in 1995. My husband had two daughters and one son. The daughter had four children, and one son had four and the other had five. I have two biological and two adopted children.

Q: There has been a great deal written and featured about the experiences of you and your brothers, including the 2008 film “Defiance.” How accurate are the stories and portrayals, and can you address the accuracy of memory in general, particularly when it comes to the Holocaust?

AB: What happened was much worse than what the movie portrays.

The movie didn’t show how they trekked through the snow, how they were freezing to death.

Q: What happened after the war?

HB: Aron’s brother, Asael, served in the Russian army fighting Hitler and was killed in battle. His wife, Chaja, gave birth to their daughter.

Aron was sitting on the sidewalk, thinking about what to do with his life. No parents, no family, nobody. It was the hardest time in his life because he didn’t know what to do. His brothers, Zus and Tuvia, went to check on their wives.

AB: I sat down on the sidewalk and came to the conclusion: There’s no sense thinking. You get hungry. You got to go to work. I went and worked for whoever needed help.

Q: What kind of work did you do?

AB: Cleaning the village oven that cooked food. Whatever I was told to do, I was happy to do it.

Q: What are your thoughts on Holocaust revisionism, such as Poland’s recent laws about terminology? On Holocaust denial? On those who say that nothing so extreme as the Shoah could have happened?

HB: I used to live in Canada and knew a Jew who came to North America at the same time as Aron. He was a Nazi collaborator in Auschwitz. He was taking gold from Jews. He said he was doing it because he wanted to save his life. But with that gold he brought to Canada with his cousin, he bought a two-story mansion.

Q: As one of the remaining survivors of the Holocaust, what is your message to the Jewish community, the United States and the world?

AB: People should be nice to each other, to help each other, whoever needs help. Be good to your family and to people. If you see a person needs help, help him or her. Because the good Lord will know about it.

To Give Is to Receive 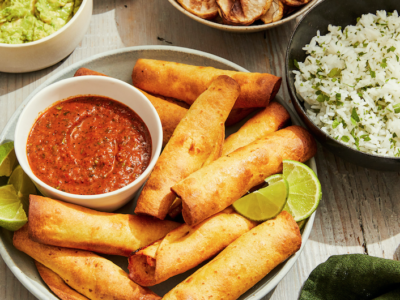 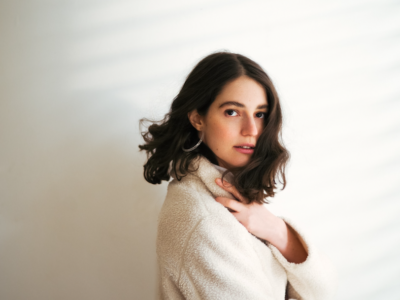