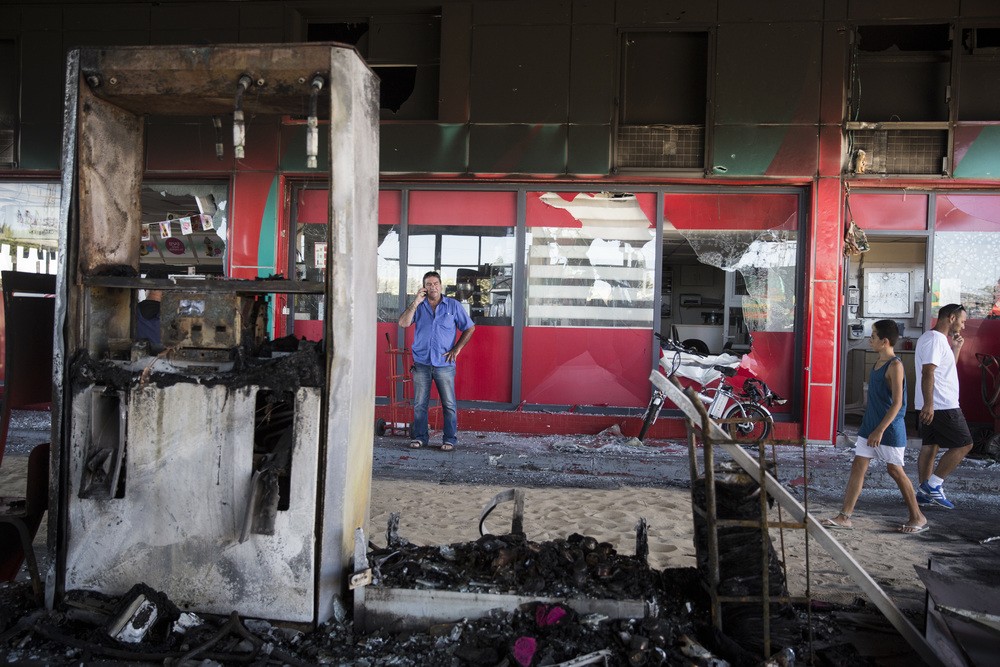 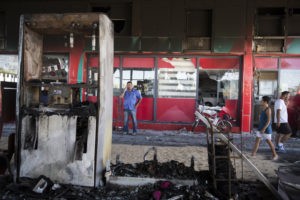 The 50-day war between Israel and Hamas dominated headlines around the world throughout this summer. The events leading up to the conflict began with Hamas’s June kidnapping and murder of three Israeli teenagers—Eyal Yifrach, Gilad Shaar, and Naftali Frenkel—followed by the apparent revenge killing of Palestinian teenager Mohammed Abu Khdeir.

Israelis spent the summer running to bomb shelters due to rocket barrages launched by Hamas from Gaza. Many of the Palestinian rockets proved to have wider reach than ever before, striking central Israel and even as far north as Haifa. Due to a rocket that fell near Ben Gurion Airport, the U.S. Federal Aviation Administration (FAA) implemented a controversial ban on flights to and from Israel that lasted 36 hours.

Israel initially responded to the Hamas rockets with airstrikes, but eventually launched a ground invasion dubbed Operation Protective Edge, which destroyed more than 30 Hamas terror tunnels that ran underneath the Israel-Gaza border. During the conflict, Israel accepted 11 cease-fire proposals that were all violated by Hamas, until the 12th and final cease-fire was reached on Aug. 26.

Without an agreement in place to extend the U.S.-brokered Israeli-Palestinian peace talks beyond their initial March 28 deadline for a resolution, Israel decided against proceeding with its fourth scheduled release of 26 Palestinian terrorist prisoners. The Palestinian Authority (PA) responded by beginning the process of joining 15 international conventions, violating the peace talks’ ban on unilateral actions.

In April, PA President Mahmoud Abbas’s Fatah party agreed to form a unity government with Hamas. Thus, Fatah’s pact with an organization whose charter vows the destruction of Israel prompted the Israeli government to officially pull out of the peace talks.

In May, four people, including an Israeli couple, were killed in a shooting at the Jewish Museum of Belgium in Brussels. Mehdi Nemmouche, a French national with suspected ties to Islamic radicals in Syria, was arrested over the shooting and charged with murder.

European anti-Semitism rose sharply during Israel’s Operation Protective Edge. Compared to the same month in 2013, this July saw a 400-percent rise in anti-Semitic incidents in the United Kingdom, according to the Community Security Trust. Anti-Israel rioters attacked two Paris synagogues, chanting “Death to Jews” and “Hitler was right,” while French Jews continued to make aliyah in record numbers. 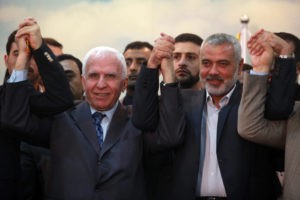 Head of the Hamas government Ismail Haniyeh (right) and senior Fatah official Azzam Al-Ahmed (left) raise their hands together at a news conference that announced a unity agreement between the rival Palestinian factions in Gaza City on April 23, 2014. Credit: Abed Rahim Khatib/Flash90.

The rise of Islamic State

The Islamic State terrorist group came to the forefront of Western media attention after seizing control of Iraq’s second-largest city, Mosul, in June. Since then, the group has gained notoriety for its brutal persecution of Mideast religious minorities such as Christians and Yazidis. Islamic State has also executed American journalists James Foley and Steven Sotloff, as well as British aid worker David Haines.

After Sotloff’s execution, Israel’s Foreign Ministry revealed that he was an Israeli citizen. Sotloff made aliyah in 2008. To protect him while he was held captive in Syria, a network of more than 150 of his friends and acquaintances raced to delete information from the Internet that discussed his Jewish and Israeli identity.

In November 2013, the U.S. and the other P5+1 powers reached a six-month interim deal with Iran on its nuclear program despite opposition from Israel, Jewish groups, the U.S. Congress, and Saudi Arabia. In exchange for sanctions relief, Iran promised dilute its 20-percent-enriched (high grade) uranium stockpiles to 5 percent and was allowed to continue production of uranium enriched up to 3.5 percent while the agreement was in effect. The P5+1 in July agreed to extend the Iran nuclear talks to November 2014.

The boundary between anti-Zionism and anti-Semitism on American college campuses became increasingly blurred this year, particularly in relation to the actions of Students for Justice in Palestine (SJP). During an orientation event at Temple University in August, a Jewish student was punched in the face by an SJP member and called slurs such as “kike” and “baby killer.”

SJP was also behind the growing trend of mock eviction notices placed in student dormitories across the country, including at New York University in April. While the anti-Israel group claims the notices are strictly meant to protest the Israeli “occupation,” pro-Israel experts have said the notices cross the line into anti-Semitism due to their intimidation of students and delegitimization of the Jewish people’s indigenous right to self-determination in their homeland. At Northeastern University, the eviction notices promoted the suspension of the school’s SJP chapter, but the group was later reinstated.

On the faculty side, the membership of the American Studies Association last December voted to endorse a boycott of Israel, while the Modern Language Association (MLA) delegate committee passed a resolution in January condemning Israel for denying the entry of U.S. academics into the West Bank. The resolution, however, was defeated in June in a vote among MLA members.

During Israel’s Operation Protective Edge, then Turkish prime minister and now President Recep Tayyip Erdogan accused the Jewish state of committing “genocide” and waging “terrorism” against the Palestinians, and protesters attacked the Israeli embassy and consulate in Ankara and Istanbul. Erdogan also said Israel’s “barbarism has surpassed even Hitler’s” and dismissed the possibility of normalizing relations with Israel.

Ukrainians took to the streets of Kiev to protest against then President Viktor Yanukovych, in a movement that became known as Euromaidan. Amid the violent protests, several men attacked Israeli teacher Hillel Wertheimer in January after he left a synagogue at the end of Shabbat. Also in January, a yeshiva student from Russia, Dov-Ber Glickman, was attacked after he left a synagogue.

After Yanukovich’s ouster, pro-Russian rebels in February began taking over infrastructure in the Crimean peninsula. In March, Crimea voted to secede from Ukraine and join Russia in a voting process that was deemed illegal by the international community. Around that time, a synagogue in the Crimean city of Simferopol was spray painted with anti-Semitic language.

In April, a flyer bearing the stamps of the self-proclaimed “People’s Republic of Donetsk,” a pro-Russian separatist group, was distributed to Jews as they left Passover services and called on them to either register as Jewish with authorities or be deported.

In January, the Taglit-Birthright Israel program expanded eligibility for its free 10-day trips to Israel for Jewish young adults ages 18-26. Teenagers who went on an educational trip to Israel during high school were previously not eligible for Birthright trips, but can now participate.

In April, member groups of the Conference of Presidents of Major American Jewish Organizations voted 22-17 to reject the membership application of the self-labeled “pro-Israel, pro-peace” lobby J Street. In the vote, which was widely seen as the de facto expression of mainstream U.S. Jewry’s outlook on J Street, the lobby garnered just half of the 34 votes it needed to gain membership.

In April, Kansas’s tight-knit Jewish community was rocked just one day before the beginning of Passover as neo-Nazi gunman Frazier Glenn Miller took the lives of three people and injured another in shootings just minutes apart outside of the Jewish Community Center of Greater Kansas City and the Village Shalom retirement village.

Kansas, however, was also the source of feel-good Jewish news. JNS.org profiled Rose Marchick, a foster mother to more than 150 children (and counting) over the last nine years in the city of Olathe. Marchick accepts children who suffer from mental and emotional disorders such as fetal alcohol syndrome or reactive attachment disorder. Following the JNS.org article on Marchick, the local Fox television affiliate also covered her story.

Former Egyptian defense minister Abdel Fattah El-Sisi, hailed as a hero in Egypt for his role in the ouster of Islamist president and Muslim Brotherhood member Mohamed Morsi, easily won the country’s presidential election this May with more than 90 percent of the vote. With El-Sisi in power, Israel and Egypt have a shared interest in cracking down on Islamic terror groups in the Sinai Peninsula and in targeting Hamas, which is an offshoot of the Muslim Brotherhood.

March 15 marked the third anniversary of the beginning of unrest that led to the ongoing Syrian civil war. Israel, which shares a contentious U.N.-patrolled border with Syria in the Golan Heights, faces new threats at that border such as al-Qaeda-affiliated rebel terror groups, as well as old foes like Hezbollah, Iran, and Syrian President Bashar al-Assad.

In June, Israeli-Arab teenager Mohammad Karaka was killed by an explosion resulting from a mortar shell fired from Syria.

Last October, two Israeli scientists and one American Jewish scientist shared the Nobel Prize in chemistry for work that made it possible “to map the mysterious ways of chemistry by using computers.” The winners were Arieh Warshel, an Israeli-American professor at the University of Southern California; Martin Karplus, a Jewish citizen of the U.S. and Austria who researches at the University of Strasbourg and Harvard University; and Michael Levitt, an American, British, and Israeli citizen who works at the Stanford University School of Medicine.