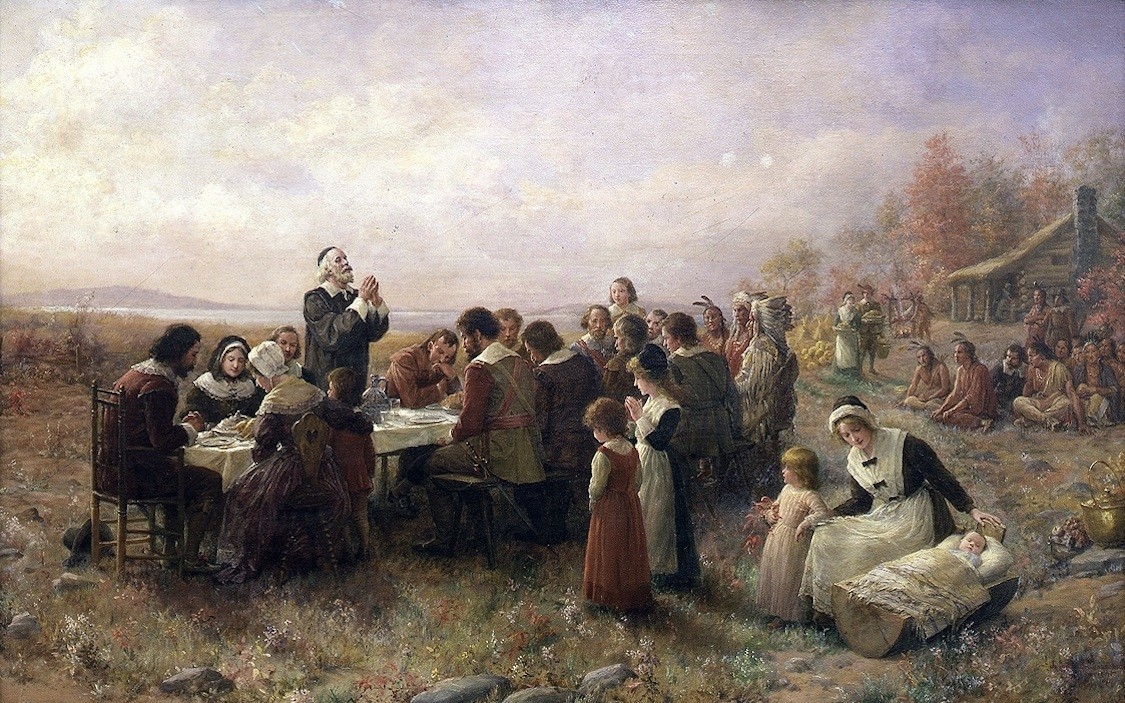 "The First Thanksgiving at Plymouth," by Jennie A. Brownscombe. JNS.org examines whether Thanksgiving was shaped by Sukkot. Credit: Jennie Augusta Brownscombe via Wikimedia Commons. 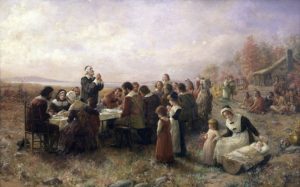 “The First Thanksgiving at Plymouth,” by Jennie A. Brownscombe. JNS.org examines whether Thanksgiving was shaped by Sukkot. Credit: Jennie Augusta Brownscombe via Wikimedia Commons.

According to one of the foremost experts on American Judaism, Dr. Jonathan Sarna, the biblical holiday did not exactly guide the Puritans’ thinking during colonial times, but they were generally influenced by the idea of thanking God for their bounty.

“The Puritans did not believe in fixed holidays,” Sarna—the Joseph H. & Belle R. Braun Professor of American Jewish History at Brandeis University and chief historian of the Philadelphia-based National Museum of American Jewish History—told JNS.org. “If it was a good season, they would announce a thanksgiving, but it’s not like the Jewish holiday which occurs on the 15th of the month of Tishrei (Sukkot). They did not believe in that. So in that respect it’s different.”

In terms of thanking God for a bountiful harvest, the Puritans did learnthat from the Bible, Sarna said.

“They knew what they called the Old Testament, what we call the Hebrew Bible, they knew it, and they were influenced by it,” he said. “Now they didn’t go out and build huts, obviously. But the notion that one would be thankful for a bountiful harvest was certainly one they would have learned from the Hebrew Bible.”

Thanksgiving did not become a fixed holiday in America until President Abraham Lincoln declared it as such in 1863. The holiday also did not have a firm date until Congress established one—the fourth Thursday of each November—in 1941.

Although “you’ll commonly read all over the place” about the connection between Thanksgiving and Sukkot, Sarna said that Diana Muir Applebaum—a Massachusetts-based historian who wrote the book “Thanksgiving: An American Holiday, An American History”—set him straight on the subject when he consulted with her.

Applebaum believes there is always some difficulty in discovering the “first” of anything.

“The Separatists at Plymouth did not create an annual holiday [of Thanksgiving],” Applebaum told JNS.org. “Rather, a holiday that grew in popularity and stabilized into an annual celebration over the course of several decades was later traced back to an event that took place at Plymouth in December 1621. The thesis of my book on Thanksgiving is that it is a holiday rooted in the deeply held convictions of the New England settlers, and in the human love of a holiday.”

But did the Bible have any influence on the Puritans’ festival of thanks?

Applebaum explained that the Puritans separated the laws of the Hebrew Bible into two categories. “Some were deemed moral commandments, these applied to all men, at all times,” she said. “The others were regarded as ceremonial or temporal commandments, which applied only to Jews, or only to the olden days, but not to Christians.”

For Puritans, the Sabbath was an eternal, moral commandment applying to Christians, but they considered Sukkot, Passover, Shavout, kashruth, and other laws to be ceremonial or temporal commandments, not intended by God to apply to the children of the new covenant, Christians. Puritan theology “supported the proclamation of special days of prayer when unusual events occurred,” Applebaum said.

There were robust debates among the Puritans in the mid-1600s over the propriety of issuing a proclamation of a day of thanksgiving every autumn. Was an ordinary harvest a routine event, or was it a special providence?

“[People feared that] proclaiming a day of thanksgiving every autumn might ‘harden the people in their carnal confidence’ of God’s grace, and people might begin to take God’s gifts for granted,” Applebaum said. “If a proclamation was expected every year, how was it different from the unbiblical Catholic error of creating fixed annual holidays? On the other hand, [some thought] God’s great bounty in sending the harvest was surely worthy of thanksgiving. And people like holidays. In years when the General Court (the Massachusetts legislature) failed to proclaim a day of thanksgiving, individual congregations sometimes did.”

After 1676 in Connecticut, and by the 1690s in Massachusetts, the government of each of those colonies proclaimed a special day of prayer and thanksgiving every autumn. It was celebrated by families returning home to celebrate, with special dishes (mince pie and plum pudding) eaten at Christmas in old England, and with events like ballgames on the village green that would have been inappropriate violations of a Sabbath day.

But there are those like Rabbi Elias Lieberman, leader of the Falmouth Jewish Congregation in Massachusetts, who see a stronger biblical influence on Thanksgiving.

“While we cannot be certain about what motivated those Pilgrim settlers to initiate a feast of thanksgiving, it is likely that they consciously drew on a model well-known to them from the Bible they cherished,” Lieberman told JNS.org. “Seeing themselves as new Israelites in a new ‘promised land,’ the Pilgrims surely found inspiration in the Bible, in the Books of Leviticus and Deuteronomy, in which God commands the ancient Israelites to observe the Feast of Booths—in Hebrew, Sukkot, ‘To rejoice before Adonai your God’ at the time of the fall harvest.”

The fact that Jews eat in temporary structures during Sukkot “is a reminder of the booths in which their ancestors are said to have dwelled during their 40-year Sinai sojourn,” Lieberman noted. The sukkah is also a powerful reminder “of the many reasons for which we feel grateful to God, not the least of which is for the other 51 weeks of the year most of us are blessed to have solid roofs over our heads, clothes to wear, and food to fill our bellies,” he said.

“Such was not always the case for the Pilgrims, who often contended with illness, meager rations, disappointed hopes, and death,” Lieberman said. “During that very hard winter before the first Thanksgiving, it is recorded that food became so scarce in some settlements that the daily ration of food per person per day was five kernels of corn. In order to remember those harsh times and maintain their gratitude for the plenty they now enjoyed, some New Englanders started the custom of putting five kernels of corn on each plate at their feast.”

Applebaum said that by the 1700s, Thanksgiving was a holiday throughout New England, and that it spread west with the migration of New Englanders. Settlers from New England largely populated the top third of the states, starting with Ohio and rolling west, she explained.

“This helped spread the popularity of Thanksgiving when these New England-born thought leaders backed the early 19th century campaign led by Sarah Hale to make Thanksgiving a national holiday,” she said. “Thanksgiving proclamations were issued by state governors.”

During the Civil War era, southerners associated the concept of a thanksgiving holiday with Yankee abolitionists, and therefore the holiday “did not become popular in the South until the end of the 19th century,” according to Applebaum.

Whether or not its formation was actually influenced by Sukkot, the parallels between the holidays serve as meaningful symbolism for individuals like Rabbi Lieberman.

“Both of these splendid holidays encourage us to stop and acknowledge the manifold blessings God bestows upon us each and every day,” Lieberman said. “Whether we accomplish that stock-taking over a slice of Thanksgiving pumpkin pie or beneath the leafy branches of a sukkah roof—or both—we understand and embrace the impulse which inspired our Pilgrim and our Israelite ancestors.”