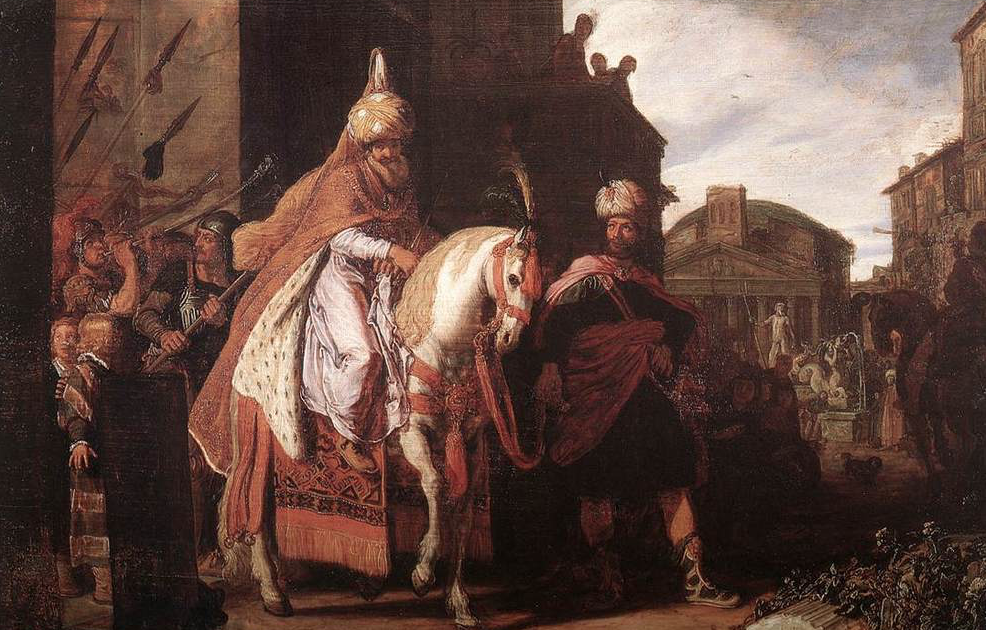 Caption: A painting of the triumph of Mordechai, who was paraded in royal clothing by around the city of Shushan by Haman, an honor Haman had hoped he—not Mordechai—would receive upon suggesting the idea to King Ahasuerus. Credit: Rembrandt House Museum via Wikimedia Commons.

The names of religious holidays are usually fairly straightforward, pointing us to the central symbol or theme of the festival. Pesach refers to the ancient lamb offering, the korban pesach; Shavuot, meaning “weeks,” points to the careful counting of seven weeks that precede it; Sukkot are the booths that Jews inhabit during the celebration of that name. But just what is the name “Purim” all about?

Purim is a plural noun, but incidentally, not a Hebrew one. Pur, as I will explain in more detail below, is an Assyrian word meaning “lot,” some object involved in a game or ritual of chance. The Megillah (or “Scroll”) of Esther, whose reading is the highlight of the Purim liturgy, uses the word pur to describe the method employed by Haman to choose the day on which the Jews of Susa (or Shushan) were to be massacred. For the benefit of its Hebrew speaking audience, the megillah offers an on-the-spot translation: hipil pur hu hagoral, meaning “he cast pur, that is, lots,” goral being the common biblical term for a lottery. We can infer from this quick annotation that even ancient readers of the megillah would have been unfamiliar with the word pur.

That’s not to say that ancient Hebrews were strangers to methods of chance. The most famous use of goral in the Hebrew bible was the so-called scapegoat ritual of the Yom Kippur liturgy. Two goats were placed on either side of the high priest; one would be sacrificed upon the altar, the other would pushed off a cliff on the edge of Jerusalem. The choice of which goat was to be used for which purpose was decided by lottery. The high priest would reach his hands into an urn containing two slips of paper, one reading “for the Lord” and the other reading “for Azazel” (the precise meaning of which is another biblical linguistic mystery). The slip that ended up in his right hand would designate the fate of the goat on his right, and the same for the left. The element of randomness in this practices put the outcome squarely into the hand of fate, or the will of heaven.

What then do we know about Haman’s pur? In a fascinating 1983 article for The Biblical Archaeologist titled “The First Purim,” William Hallo explains that the pur was nothing less than the oldest game in human history: dice. As the curator of the Yale Babylonian Collection, Hallo had under his care a clay cube dating back to the 9th century BCE, which belonged to a minister of the Assyrian king Salmaneser III. A portion of the cuneiform text inscribed on the cube reads, “Iahali the grand vizier… in his year assigned to him by lot (pur) may the harvest of the land of Assyria prosper and thrive, in front of the gods Assur and Adad may his lot (pur) fall.” Here we see two striking similarities to the megilla text. Firstly, in both places the pur is used to make a decision about calendar time; secondly, both sport the verb “fall,” as in “Haman caused the pur to fall (hipil pur).”

So how did it work? Hallo suggests that the ancient dice were dropped or thrown (that is, made to fall) from a specialized bowl toward statues of the gods, in this case Ashur and Adad. With each minister casting their own dice, the hope was that one’s own cube would end up in some desirable position, perhaps closest to the idol. The prize was extremely valuable—the winner of the game had an entire year of the king’s reign named after him (e.g. the “year of Iahali”), resulting in wide scale publicity and immortalization in the official chronicles.

Exactly how similar Haman’s use of the pur would have been to Iahali’s is still not clear. Scholars assume that the Scroll of Esther was written in the late Second Temple period, centuries later than Salmaner III’s reign, and the practice of pur may have evolved and changed by over time. There is still much more for archaeologists and biblical historians to uncover. In the meantime, novel insights like this one continue to de-mystify and animate our ancient texts. The image of Haman rolling his dice enhances the color and drama of this most distinguished Jewish tale about the twists and turns of fate.