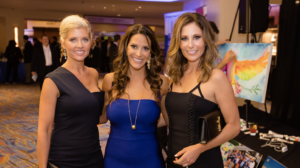 StandWithUs San Diego will host its 8th annual “Leaders of Tomorrow” gala on Sunday night, October 27th.  This year’s theme is “Standing Together Against Antisemitism,” and will begin at 5:30pm.

SWU San Diego is entering its 9th year fulfilling its mission to educate about Israel on campuses, high schools, middle schools and the community, and to fight against antisemitism.

Associate director Yael Steinberg together with Board president Mitch Danzig from Mintz Levin, along with an 18-member board, are expanding the non-profit organization’s reach in the region through continuous innovative programming.

Board members Natalie Josephson and Jaime Feder will co-chair the gala once again.  New board member Yamia Benhaim joins the team this year to produce an extraordinary event for the community.

Outraged by the anti-Israel Apartheid Wall they witnessed at UCSD and SDSU and the antisemitic rhetoric in the community, Ja​ime and Natalie were motivated to take action and joined the StandWithUs San Diego chapter several years ago.

Yamia was born in Israel. She returns most summers with her family.  Yamia shares that she, “supports StandWithUs for many reasons, but most importantly, because I want my kids to love Israel and be proud–not fearful – of their Jewish identity.”

Natalie Josephson “feels a deep obligation to educate my children and others about Israel and to stand up for the Jewish People.  This is my duty.  StandWithUs is the only organization exclusively focused on combating the growing voice of anti-Israel bigotry and hatred.  This is why I believe in it.”

“StandWithUs is an incredible organization that fights antisemitism on many crucial levels,” states Ja​i​me Feder.  “SWU is building a strong foundation among today’s youth by giving them the tools to stand up for themselves and the Jewish people when faced with adversity. It’s important that our children not simply sit quietly but speak up and share Israel’s history, its right to exist, and to confidently stand up for their Jewish identity.”

Recognizing the need to take bold steps against the escalation of antisemitism worldwide, StandWithUs launched its newest initiative on July 15, 2019:  The “StandWithUs Center for Combating Antisemitism.”

Gala attendees will learn more about the new Center’s mission to “Identify,” “Define,” “Expose,” and importantly, to “ACT” against antisemitism.  This includes taking legal action whenever necessary through its network of pro bono attorneys that includes Mitch Danzig and other San Diego-based attorneys.  ​T​he StandWithUs Saidoff Legal Department has grown to more than 170 pro bono attorneys across the United States, and has already dealt with over 800 different incidents since its inception a few years ago..

“Unfortunately, San Diego doesn’t need to look far to recognize the need for such a Center.  The shooting at Chabad of Poway terrorized the community, but also galvanized us into action.  We are saddened that such a Center had to be created, but gratified that the city and indeed, the world, recognize that antisemitism is seeping into the mainstream and must never be ignored,” states Roz Rothstein, CEO StandWithUs and daughter of Holocaust survivors.

At the gala, youth from Chabad of Poway will sing the Hatikvah.  Eight-year old Noya Dahan, and her uncle Almog Peretz who were wounded, will speak about the profound and dangerous impact of antisemitism.

Yitzhak Santis, SWU’s senior writer and analyst was scheduled to speak to SWU SD “Hertzl” and “Guardian” level donors the day before Lori’s funeral.  Held at the Fairbanks Ranch Country Club, the program began with a moment of silence.  Santis reviewed the history of antisemitism and offered action items about how to confront such hatred, based on SWU’s best practices.

Guests will once again meet the “Leaders of Tomorrow” including the 2019-20 Emerson Fellow and High School Intern. One of these leaders is SDSU 2019-20 Emerson Fellow Dana Elazar who is becoming the Southwest Campus Liaison.  She will assist the campus department in mentoring student leaders in the region and recruiting new young leaders.

Created in 2006, the  Fellowship selects and trains student leaders on campuses throughout North America and the UK to educate their peers about Israel and to combat anti-Israel rhetoric and antisemitism.

Emerson Fellow Alexandra Boyles is VP of Programming for SDSU-Students Supporting Israel. She wants to “incentivize people to learn more by increasing campus outreach through social media platforms and interesting programming.  I would like to see more students formulate their own educated opinions about Israel and the conflict.”

Kate Chavez continues as the SWU Southwest High School Professional.  Created in 2012, one objective of the SWU High School Internship is to prepare students for the anti-Israel related challenges they may face as college students. In addition, while they are in the high school program, they bring Israel to their high schools and educate their peers.

Harrison Wechsler, Southern California Yeshiva High remarks, “I became an Intern to gain knowledge about Israel and to better understand the complicated history in the region. Throughout the year, I will create nuanced programming about Israel.”

Emerson Fellows and High School Interns attended their respective training conferences in August, energized to begin making a difference at their schools across North America.

Designed for both students and parents, SWU staff utilize their experience in bringing Israel to universities and countering anti-Israel rhetoric on colleges and the community to lead “Campus Crash Course.”  The group covers topics including “Israel 101”, “Answering the Tough Questions” and “Knowing Your Legal Rights.”  There’s even a Krav Maga demonstration.

“Lunch & Learn” has brought a variety of speakers to San Diego including Hispanic Outreach Coordinator Sebastian Parra who explained how to build connections among Christians and Jews.

Last year’s StandWithUs San Diego gala attendees will remember keynote speaker Hussein Aboubakr’s harrowing life story and how he escaped Egypt and found safety in the US.  He also spoke at UCSD that year thanks to 2018-19 Emerson Fellow Adam Taryle.

“Our dynamic gala will inspire guests to become involved with StandWithUs San Diego and to become more active against anti-Israel rhetoric and antisemitism,” states Yael Steinberg.

To purchase tickets for the gala visit: https://www.standwithus.com/sdgala2019 or contact Yaels@standwithus.com or call the office: 858-598-8220.