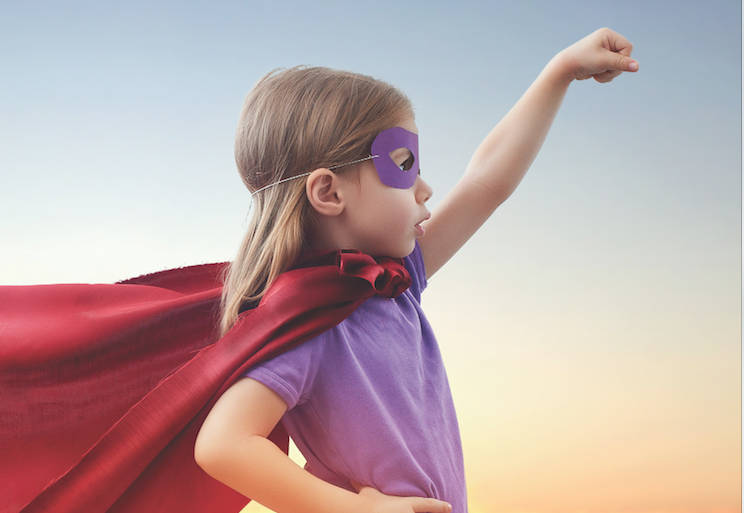 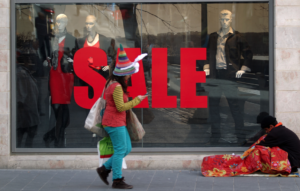 A woman dressed up in a costume for the Jewish holiday of Purim walks by a homeless man sleeping outside the Mashbir mall in the center of Jerusalem on March 7, 2012. Many Israeli organizations that are set up to help the poor go into high gear on Purim, to fulfill that holiday’s mitzvah of gifts for the poor, in Hebrew “matanot l’evyonim.” Credit: Nati Shohat/Flash90.

Israelis take Purim seriously—kids get the day off school, many towns put on a lively Purim parade, and the streets are filled with people of all ages running about in costumes, delivering mishloach manot baskets of prepared food goodies to their friends and neighbors before sitting down to the seuda, a festive meal that includes plenty of spirits.

But all these items add up, and Purim can be a costly event. For the one third of all Israeli children who live in poverty, Purim wouldn’t be Purim without the help of an array of non-profit organizations who take the holiday’s other mitzvah to heart.

According to Maimonides, the great medieval Jewish scholar, “Gifts for the poor (matanot l’evyonim) deserve more attention than the seuda and mishloach manot because there is no greater, richer happiness than bringing joy to the hearts of needy people, orphans, widows and proselytes.”

Despite Israel’s image as the hi-tech “start-up nation,” there are plenty of needy people in the Jewish state. In 2012, according to Israel’s National Insurance Institute, there were 1.75 million poor people in Israel (out of a total population of just more than 8 million), among them some 817,000 children.

That’s more than a third of all children in Israel. In 1980, only 8.1 percent of Israeli children were poor, meaning that child poverty has grown fourfold over the past 30 years.

Many organizations that are set up to help the poor are run by Torah observant Israelis, and at Purim, they go into high gear to fulfill the precept of Maimonides.

Rabbi Yakov Schischa, founder and director of the Tov V’Chesed Foundation based in Jerusalem’s Meah Shearim neighborhood, explains how his group not only prepares and delivers hundreds of mishloach manot Purim baskets packed with prepared foods, sweets, wine, and toys, but also sends out teams of volunteers who visit single-parent families to spend time bringing Purim joy into homes that may be short on simcha (happiness). A large number of the families also receive a gift of cash in honor of Purim, “but we know it will actually get used to prepare for Passover,” Schischa notes.

As the child of a large, poor, haredi family, Schischa remembers the humiliation of standing in line for food handouts, so Tov V’Chesed makes a point of preserving the dignity of recipients by having volunteers make home deliveries. His organization serves some 2,500 families per year.

The motto of Yad Ezra V’Shulamit, another group founded by someone with first-hand knowledge of growing up poor, is “Breaking the Cycle of Poverty One Child at a Time.”

Aryeh Lurie, a 50-something religious businessman, named the organization after his parents who despite their own difficult circumstances, managed to help neighbors with food.

The organization, which has been running since 1998, operates on a nation-wide scale. Spokesperson Meira Brandwein elaborates on those who turn to Yad Ezra V’Shulamit. “The families we reach are in very deep poverty,” Brandwein says. “They’re not just people who have fallen on hard times. These are people who need immediate relief, “ she adds. The breadwinner in a family dies; someone in the family needs urgent specialized medical care; a working single parent loses her job—situations that can spiral out of control and leave a family with no resources.

Brandwein enumerates the programs that serve more than 1,000 children every day with hot meals as well as tutoring and social programs; clubs for teens at risk; food baskets filled with healthy food for 2,800 families per week; vocational counseling for the unemployed; and financial assistance to help with bar/bat mitzvah and wedding celebrations, winter clothes, and school supplies that are beyond the budget of those at the bottom of Israel’s economic ladder.

For Purim, matanot l’evyonim donations to Yad Ezra V’Shulamit are added to the funds that come from a mix of private Israeli and foreign donors, U.S Jewish federations and in-kind contributions from Israeli businesses, to provide needy families with items to enable them to feel part of the holiday.

At the restaurants run by Meir Panim, a network of nutrition-related programs for the poor, Purim is a time for increased efforts to bring relief to thousands in need.

“Meir Panim means lighting up faces,” explains assistant director Goldie Sternbuch. “We do it all year around, but especially at Purim.”

Anyone who has walked from Jerusalem’s Central Bus Station to Yirmiyahu Street has walked past the unobtrusive storefront that opens into a free restaurant. Inside, dozens of hungry Jerusalemites—Arabs, Christians, Jews, elderly immigrants and foreign workers—are served a nutritious lunch with a smile by volunteer waiters.

The restaurants operate in six other cities around Israel providing what Sternbuch calls “a dignified approach to feeding the poor.” But needs are burgeoning and while food is an urgent issue, it is only one component of a holistic approach to help get people “back in the mainstream.”

One target group for mainstreaming is teenagers from disadvantaged families. The After School Youth Clubs of Meir Panim reach thousands of at-risk youths, who get motivated by energetic young volunteers and professional counselors to stay in school and continue their education.

As soon as the final chunk of money is raised, Meir Panim will launch its most ambitious project to date—a $12 million Israel Nutrition Center located in the southern town of Kiryat Gat and named for well-known U.S. philanthropist Mortimer Zuckerman and his daughter Abigail.

The facility will be the largest food distribution center in the Middle East, set to serve 30,000 meals every day to disadvantaged school kids, the free restaurants and meals on wheels programs around the country. It is a massive undertaking that will be managed in partnership with a large Israeli catering company.

Rabbi Schischa of Tov V’Chesed acknowledges that programs like his “can’t fix the world,” but “at Purim, everyone can take part in the mitzvah of matanot l’evyonim to bring more joy into the world.” 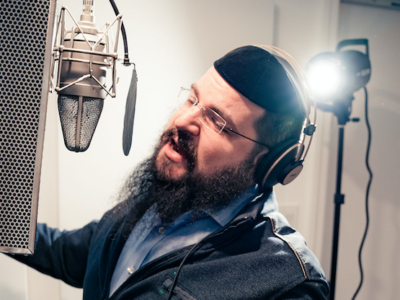