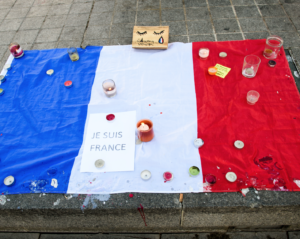 Ah, Religion. I know I may get into some hot water for this but the recent terrorist attacks in Paris, France remind me of the dangers of extreme religious zealots. While you read this, and if you disagree, please let me know. Tweet me @salomaya or the old fashioned way, just email my editor. But I’m going to state my opinion, and to save any hard feelings toward our loyal and amazing readership I shall state the obvious that this is my opinion alone and not that of L’Chaim Magazine or its publishers or advertisers.

I’m not going to reinvent the wheel here folks, nor say something that is so out of left field it will cause an uprising. But in today’s world we just can’t sit as fanatics gain more traction. And by fanatics I mean in EVERY religion, including our own. For even today, an extreme form of Judaism exists, and if you think by being God’s chosen people we are exempt from morality and ethics, you’ve got another thing coming.

Now, we all know about extreme Islamic Jihadists. No need to rehash. Terrorist groups such as ISIS are not only growing in number but also growing in violent acts. Not since the Nazis has a group cared so little about the world and so much about growing their own belief of a utopian society.

Yet extreme religious zealots are not unique to Islam. In parts of Sri Lanka, Myanmar and Burma there exists an extreme group of Buddhist Monks hell bent on harming Muslims, to the point of killing some of them. In 2013, Buddhist Monks in Meiktila, Burma left 43 dead and 12,000 displaced. The group even has their own “Buddhist Bin Laden” (yes he actually called himself that) named Ashin Wirathu, who was released from prison in 2012. The violence grew so much in 2013 that even the Dalia Llama asked that these monks curtail their violence toward Muslims.

Now when it comes to extreme religious Christian nuts don’t look further than the Westboro Baptist Church of Topeka, Ks (WBC). Founded by Fred Phelps, the WBC have famously picketed the funerals of veterans and homosexuals and proudly state that they have picketed in every state in the US. Although they are not violent, their hatred sometimes cuts deeper than a knife ever can.

Even Jews are not exempt from these extreme ways and, we too, have literal blood on our hands. In 2014, Four Orthodox Jewish rabbis and one of their sons were indicted on charges of kidnapping Jewish men and violently forcing them to grant divorces to their wives. In the indictment, testimony included that the “rabbis wore bandanas and Halloween masks and brought rope, surgical blades, and a screwdriver to carry out the beatings.”

Faith is a beautiful thing. Yet we live in a world where people have perverted their religion in the name of God. They have slandered, abused and killed in His name.

We are the smartest species to ever roam this planet. Yet we murder each other in the name of a prophet, a messiah, a God. We currently destroy the very same planet we all inhabit and yet believe there is somewhere else we’re to go from here … a heaven … a paradise … a blind faith. If there is a God, and we all were created in his image, well … then I look around and maybe I just might not want to meet him.

May the victims of the tragedy of November 13, 2015 in Paris be always remembered.