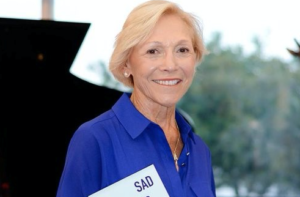 After her husband Jerry died, Harriet Vogel started writing letters to him.

“I began doing it because it was therapeutic and comforting,” says Harriet, a grief counselor who has worked with New York-area hospice programs.

Ten years later, those letters to Jerry form the backbone of her book Sad Is Not Bad: It’s How We Grieve After We’ve Loved, which includes guidance and advice derived from Harriet’s life and her years of counseling those who have also lost spouses.

Five years ago, at age 73, Harriet met her current love online — after grieving sufficiently to be open to someone new. “It’s absolutely wonderful to love and be loved again,” she says.

Harriet is convinced grief needs to be approached with as much courage as possible. “When you embrace your grief and don’t dodge the hard work, you can come out healed,” she says. “You still miss your spouse, but you can let go of the anger and depression.”

The next step, even at an advanced age, can be determining when one is ready to love again.

“It came as a complete surprise,” says Harris Jaffe, 74, who did not expect to marry again after his first wife died. “But I’m so glad I [remarried]. We had a deep and profound love, and wanted to do this before God. That’s the only reason we would go through the mishegas (craziness) of getting married again and blending families.”

“[My second wife had] been through a bitter divorce, but for her the past was in the past,” he says. “We had a wonderful five years together. She was my blessing even when she was so ill and probably didn’t feel like a blessing. She taught me that love can happen at any age.”

Rabbi Yitzchak Breitowitz, an expert on Jewish marriage who teaches at the Ohr Somayach yeshiva in Jerusalem, recommends to “allow yourself the time to work through the grief before attempting love again.”

Synagogues and other Jewish institutions can help with the bereavement process. At the Shira Ruskay Center, a program of the Jewish Board of Family and Children’s Services in New York, eight-week groups help seniors through what can be a challenging and painful time. The sessions tap into the rich trove of Jewish mourning traditions with a prayer or Torah teaching, designed to provide comfort and inspiration.

“Each discussion of Jewish mourning traditions leads to sharing and support,” says Miriam Herscher, a chaplain and social worker who is part of the center’s team of clergy and counselors.

“What we do is “normalize” what they’re feeling,” she says. “We walk with them part of the way on their grief journey.”

Jaffe, a graduate of the Ruskay Centre’s program, says he signed up the year after his second wife’s death in part because it was something he didn’t make the time for when his previous wife had died many years earlier.

“Back then I had a young daughter who needed me and a demanding job — I know I suppressed my own grieving,” he says. “But this time I made it a priority.”

On the opposite end of the country, Rabbi Aliza Berk works with San Diego-based Jewish seniors in a six-week bereavement group through the LightBridge Hospice Community Foundation.

“The greatest thing they come away with is the feeling that they are not alone,” she says. “We offer a safe place for them to cry and laugh, to share their feelings and learn how to cope.” The sessions cover the basics of Jewish mourning, from shiva (the first seven days) to shloshim (the first month) to yahrzeit (death anniversary), as well as Jewish views on the afterlife.

Rabbi Breitowitz explains that the pain of losing a spouse “seems like it will never go away, and a person might even feel disloyal to their late spouse by even considering remarriage.” Yet “in life and love, second chances can be deep and loving,” he says.

Judaism tends to encourage remarriage, says Moshe Raichman, who directs ChabadMatch.com. Since the Chabad-Lubavitch Hasidic movement is committed to “love and marriage at any age,” Chabad maintains a global network of shadchanim (matchmakers), some of whom specialize in helping older singles.

“Marriage isn’t just a practical arrangement. At any age, it’s the chance for a true soul mate,” says Rabbi Simon Jacobson, author of Toward a Meaningful Life: The Wisdom of the Rebbe Menachem Mendel Schneerson and dean of the Meaningful Life Center. “Older love can go beyond the physical, intellectual and emotional. No longer distracted by looks, you can appreciate their personality and soul. You know that intimacy is more about trust than lust.”

Getting remarried “is the biggest compliment you can pay your late spouse,” says Rabbi Reuven Belka, author of Jewish Marriage: A Halakhic Ethic.

“Not only would your husband or wife not be angry,” he says, “assuming they loved you, they’d want you not to be alone.”