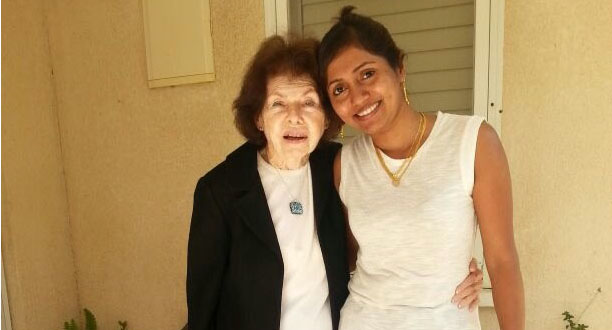 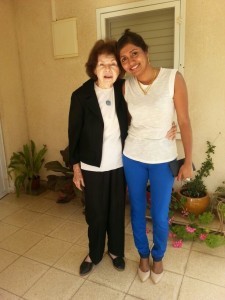 Janet Tauro (right), a foreign worker from Mumbai, is the caretaker for Varda Kahanovich (left), a 90-year-old Israeli woman living on Kibbutz Maagan Michael. “Today the foreign caregiver that lives with the patient—this is the most common way to grow old in Israel,” says Yaron Bengera, vice president of Yad Beyad, a Tel Aviv-based agency that recruits foreign workers. Credit: Provided photo.

Janet Tauro and Varda Kahanovich made a deal upon which their lives depend. Tauro, a foreign worker from Mumbai, provides Kahanovich, a 90-year-old Israeli woman living on Kibbutz Maagan Michael, warm and devoted care. In return, Kahanovich hopes to live a long and happy life, well beyond her current age, with Tauro as caregiver.

Morbid as it may be to contemplate an old woman’s passing, for Tauro and the 60,000 other foreign workers currently employed as caregivers in Israeli households, the stakes are high. Work visas are patient dependent and are granted for four years and three months, with no extensions or opportunities for reassignment in the event of the elder person’s death. Following the patient’s death, a caretaker must return to his or her country of origin, terminating a source of income that has provided countless opportunities for their families. The lots of the elderly and the caretaker are intertwined.

The situation of Tauro and Kahanovich is a familiar one in the Jewish state.

“Today the foreign caregiver that lives with the patient—this is the most common way to grow old in Israel,” Yaron Bengera, vice president of Yad Beyad, a Tel Aviv-based agency that recruits foreign workers, tells JNS.org. “In the past, patients would be taken care of by their family, but this is changing fast. With more capitalism and more demanding lives, it gets harder.”

There is a consensus among Israelis that caring for the elderly is demanding work. Many senior citizens require constant supervision and assistance. Despite their best efforts, working adults—balancing careers and young families—buckle under the pressures of modern life in Israel and are unable to provide adequate care for their aging parents without hiring help.

Yad Beyad helps Israeli families find the right caregiver to suit their specific needs. The agency also supports foreign workers, providing information about their rights and cultural resources, and counseling them to ensure their success as caretakers. In the case of Tauro and Kahanovich, a perfect match was made.

“I was astonished to see such a beautiful girl. She is my friend,” Edna Oren tells JNS.org, recounting the day that Tauro first arrived at Maagan Michael to take care of her twin sister. In this case the culture shock was minimal, since Tauro had previous experience working in another Israeli home and she had even learned Hebrew.

“We are so lucky,” Oren says. “There are not many people like Janet,” Oren says. “She has two brains, not one, and she has four hands. She even learned to sing Hatikvah (the Israeli national anthem).”

Tauro says she works as a caretaker but also works “from my heart.” In her first job as a caretaker, she looked up Israeli songs on YouTube, singing and dancing with the woman she served. She even learned her patient’s style of cooking.

“My motive is to make her (Kahanovich) feel like she is living in her own house and can make her own decisions,” says Tauro.

The system is not without faults. Many foreign workers suffer emotional distress, having been separated from their children and families abroad. Likewise, difficult work environments have, on occasion, resulted in abuse.

“Like anything in life, you take a chance,” Lender says.

Israel may not be perfectly adapted to support a foreign work force, but a significant effort has been made to inform workers of their rights, regulate payment, and provide a genuine welcome. By law, workers are entitled to a base salary of 4,300 NIS ($1,235) per month, out of which employers can make deductions accounting for the live-in caretaker’s room and board. Contracts also stipulate that caretakers receive nine paid holidays based on their own country’s calendar, and 150-percent pay on weekends.

It is not a competitive salary from a Western perspective, yet it “can be life-changing for families in the third world,” Bengera explains.

“If you had a country that you could work in and then you could buy your own house, put your kids through school, you would take this opportunity,” he says.

According to Kavlaoved.org, a website and hotline providing an overview of foreign workers’ experiences in Israel, nearly 80 percent of foreign caregivers in Israel are female.

“We prefer to bring female caretakers with families to Israel because they need the income and are better motivated,” Bengera says.

Bengera is conscious that the presence of this workforce is affecting the culture of Israel, as well as that of the foreign workers’ native countries.

“In the worker’s homeland the fathers become the mothers,” he says. “Sometimes mothers don’t go back to their husbands. The women feel free here. We are not sure that this is for the better.”

Patriarchal and traditionally closed societies are being pried open by what Bengera calls the “global competition for a workforce.” Israel is providing a path of escape to some individuals and a sound mechanism for social mobility.

“If a first-degree relative is working in Israel it is almost impossible for [his or her kin] to visit,” Bengera notes.

Life’s circumstances led Tauro to the conclusion that seeking work abroad was the best way to provide for her children, and she is committed to the course she chose, no matter the hardship.

“Everything I earn is for my kids’ education, I believe in education,” Tauro says, adding that her work will be complete only when her children can stand up on their own and say, “Mom, we’re done with the help. Now we want to help you, it’s our turn.”

Being dependent on Kahanovich’s health for continued employment, there is always the fear that Tauro’s contract will end abruptly, leaving her unable to continue working in Israel and creating a family financial crisis. Bengera, however, affirms that the experience of foreign workers in Israel is valuable to other Western employers, specifically in the United States, Canada, and England. Many workers use Israel as a steppingstone for better positions in other countries.

Critics lament that for talented workers like Tauro, there is no path to Israeli citizenship and no exceptions to the patient-dependent contracts of four years and three months. Israel is throwing away valuable expertise whenever veteran workers are deported, they say.

Bengera suggests that the contracts exist partially as a practical protection against worker burnout, but believes there should not be a limit on the number of years a worker can stay in Israel.

“I think the [Israeli] government should recognize that these workers are a part of the fabric and culture and I think it should be possible for families to visit,” he says.
It will do good for the workers and the tourists to see their children in Israel, and for the children to understand their parents’ work.”

Tauro echoes those sentiments when she explains her sympathy and involvement with the Jewish people whom she has met and served in Israel.

“After being in Israel this long, I am a part of the pain and the joy,” she says regarding her experience caring for Holocaust survivors and observing Israeli memorial days for fallen soldiers. “I salute the country.”

D-Day and the bombing of Auschwitz