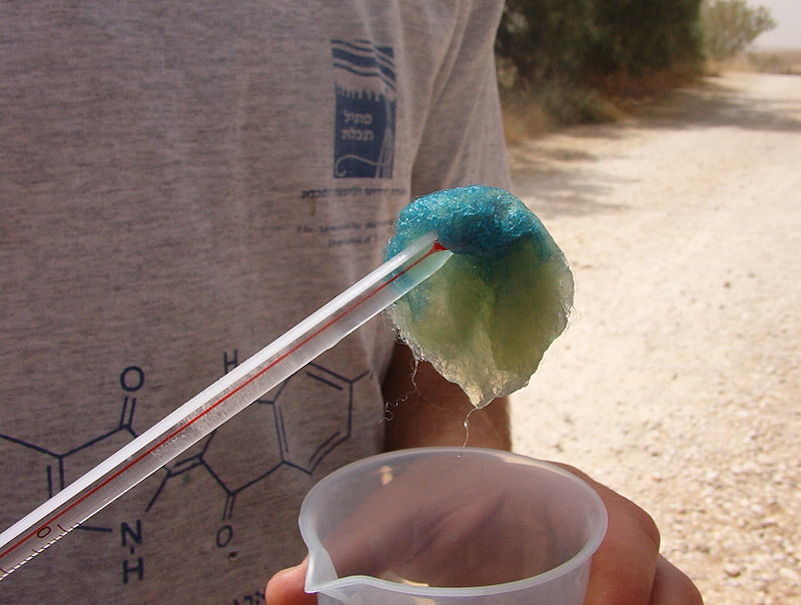 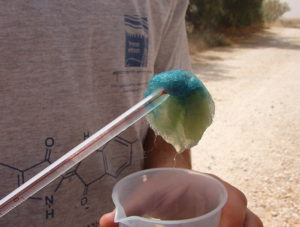 One wouldn’t expect to find hundreds of snails in a landlocked town like Kfar Adumim, situated in the desert east of Jerusalem. Yet there they are, albeit mostly reduced to powder, having been shipped in from the Adriatic Sea for a purpose as old as the Torah itself.

Millions of Jews throughout history have recited the line in the daily prayers in which God instructs Moses to tell the Israelites to “place upon the tzitzit of each corner a thread of tekhelet.” Translated as “turquoise wool,” the blue strings of tekhelet (or techeilis) were to be inserted among the white tzitzit strings to remind the garment’s wearer of two of God’s greatest—and bluest—creations: ocean and sky. Yet many Jews probably have no idea that, thanks to a unique fusion of scientific and religious passion, this commandment is once again available to the masses after a hiatus of nearly 1,400 years.

“Techeiles is a quintessential example of science and Torah working hand in hand,” Baruch Sterman, a physicist and author (with his wife Judy) of “The Rarest Blue: The Remarkable Story of an Ancient Color Lost to History and Rediscovered,” says. “After 25 years of studying it, I’m still learning about both aspects.”

The Talmud defines the tekhelet dye as derived from the “blood” of a rare amphibious snail known as the chilazon. The mitzvah to wear a thread of that dye on one’s tallit is mentioned multiple times in the Torah. But the tekhelet supply ground to a complete halt following the Muslim conquest of the land of Israel in 638 CE, when Jews were cut off from their local source of the chilazon. Though many theories surfaced over the years, even the most educated Jews had no concrete proof of which modern-day creature the Talmud’s chilazon actually was. Due to that mystery, the mitzvah of tekhelet was largely lost, becoming a source of puzzlement for centuries.

Now, thanks in large part to a few enterprising individuals and some enthusiastic rabbis, what appears to be original chilazon has been found—and tekhelet strings are being dyed in a fashion much like the process performed by our ancestors.

More than 20 years ago, a rabbinical student named Eliyahu Tavger was conducting a search for the authentic dying process. In 1988, he succeeded in dying wool with the extract of the murex trunculus snail’s gland. At the same time, a young American-born immigrant to Israel named Joel Guberman—looking for some way to honor the memory of his brother, who was killed in a car accident—became fascinated with the ancient mitzvah. He recruited two friends who had scuba-dived in the past, and they met up with Tavger for an undersea hunt for murex specimens at the waterfront near Acre. They found a whopping 293.

Before long, Tavger came up with a formula for releasing the dye into the woolen threads. After that initial dunk, the friends formed Ptil Tekhelet, a non-profit based in the Kfar Adumim tekhelet factory. Two decades later, more than 200,000 Jews from the liberal to the observant wear the blue thread on their tallit and tzitzit. What began the first year with 300 tekhelet-infused garments is now at a production rate of 150,000 per year, a figure that grows 10-20 percent annually. The customers are primarily from the U.S. and Israel and typically buy the garments at Judaica stores or directly from the Israeli factory.

All thanks to this one little snail.

On a tour of the factory, visitors will meet several of the snails at the aquarium in the facility’s lobby, naturally camouflaged to resemble stones. Visitors dunk their own ball of combed wool into a beaker filled with powdered gland extract and chemicals, to bring out the brilliant blue. Once dyed, the thread’s color never fades.

“If you hold water in your hand or look at the air around you, both look clear,” Guberman says. “You have to step back enough to see that the sea and the sky are blue. The techeilis reminds us that we need to take the long view of life to really appreciate it.”

Indeed, according to author and psychiatrist Rabbi Abraham Twerski, “White symbolizes purity and blue, the color of the heavens, represents holiness. The white combined with the blue techeilis conveys the message that a mortal can indeed achieve a state of holiness, and the techeilis string points the direction to a truly spiritual life.”

Rabbi Berel Wein—a Jerusalem-based author, lawyer, historian, and tehkelet fan—adds, “Techeilis has become a living issue. It has left the exclusivity of the study hall and entered into the everyday life of tens of thousands of Jews the world over.”

Baruch Sterman, who was on the 1988 diving mission to find the murex specimens and went on to co-found the Ptil Tekhelet non-profit, says it’s no coincidence that this mitzvah was rediscovered by the Jewish people only after they had regained their homeland in 1948.

“Just like we never stopped believing that we would someday be allowed to return home, we also never gave up on discovering the source of this beautiful mitzvah,” he says.