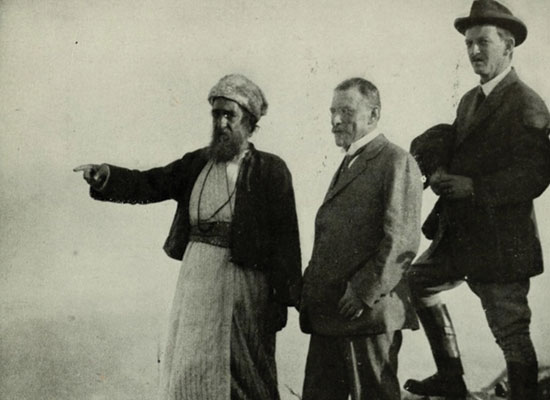 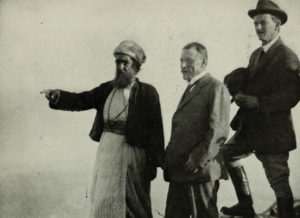 This year marks the 100th anniversary of the expulsion of thousands of Jews from Turkish-ruled Palestine to Egypt, in a dramatic reversal of the historic exodus from the Land of the Pharaohs to the Land of Israel. But from that tragic episode in 1914 would emerge a Jewish fighting force that would help liberate the Holy Land from the Turks.

Turkey entered World War One in October 1914, joining Germany in its fight against Russia, England, and France. In Turkey’s eyes, all Russian citizens, including the many Russian-born Jews living in Palestine, were now enemy nationals. Fueled by wartime hysteria and Muslim religious sentiment, the Turkish authorities in the Holy Land turned against the country’s foreign-born Jews. On Dec. 17, the Turkish governor of Jaffa, Beha A-Din, ordered the mass expulsion of the 6,000 Russian-born Jewish residents of that city.

Over the course of the next three months, thousands more Russian-born Jews were expelled from Palestine or fled just ahead of the deportations. By the spring of 1915, more than 11,000 Russian Jewish exiles were living in British-occupied Egypt.

Yaakov and Frieda Brodetzky were among the deportees. “My parents were newlyweds when the expulsion was ordered,” Moshe Brodetzky, 88, of Los Angeles, told JNS.org. “They spent their ‘honeymoon’—and the next three years—in exile in Egypt.”

With generous support from the Egyptian Jewish community, the exiled family built a new life for itself in the Mafruza and Gabbari refugee camps near Alexandria. “My father earned a living by becoming a teacher in a Talmud Torah that the refugees established for their children,” Brodetzky noted.

Meanwhile, back in Turkish Palestine, the rest of the local Jewish community struggled to survive. Some, including two of Frieda’s brothers went into hiding to avoid being inducted into the Turkish army, where anti-Jewish discrimination was rife. Others, such as future Israel prime minister Moshe Shertok (Sharett), sought to ingratiate themselves with the authorities by volunteering to serve in the armed forces.

Frieda’s father devised a unique way to elude the Turkish censors and communicate with his exiled daughter. “He would write a message on the inside of a bandage, which would be wrapped around the arm of someone who was traveling from Jerusalem to Egypt,” Moshe Brodetzky explained. “My mother saved those bandages for the rest of her life. When she passed away more than a half-century later, we found some of them among her treasured possessions.”

A number of Palestine’s Jews were forced into Turkish labor brigades, where they paved roads and worked in stone quarries without pay, barely subsisting on meager food rations. Zionist political parties were outlawed and newspapers were shut down. When David Ben-Gurion—who would later become Israel’s first prime minister—protested these measures, he too was deported to Egypt.

With thousands of Palestine’s Jewish farmers trapped in Egypt, their crops back home withered on the vine. To make matters worse, wartime naval blockades prevented the importation of many foods. As a result, from 1915-1916, thousands of Jews in Palestine died of starvation or diseases aggravated by the lack of food.

Henry Morgenthau, Sr., America’s ambassador to Turkey, played a critical role in rescuing Palestine Jewry from utter devastation. He persuaded President Woodrow Wilson to let U.S. ships bring food and medicine to the Palestine Jewish community, even though that technically meant providing supplies to a country with which the U.S. was at war.

By contrast, his son, Treasury Secretary Henry Morgenthau, Jr., was unsuccessful in his attempt, 25 years later, to convince President Franklin D. Roosevelt to permit food shipments to Jews who were starving in the Warsaw Ghetto and elsewhere in Nazi-occupied Europe. The Roosevelt administration said it could not permit shipping supplies to a country with which the U.S. was at war.

In a remarkable historical twist, the Jewish refugee camps in Egypt became the birthplace of a Jewish armed force that would help take back the Land of Israel from the Turks. Advocates of the creation of a modern-day Jewish army found large numbers of eager volunteers among those exiled.

These recruiting efforts were spearheaded by Russian Zionist leader Vladimir Ze’ev Jabotinsky, war hero and Zionist pioneer Yosef Trumpeldor, and a fervent Christian Zionist, the famous British lion-hunter Col. John Henry Patterson. The latter personally signed up the first 500 volunteers in the Gabbari camp. “Even many years later, my father still vividly recalled, and told me about, the stirring speeches that Jabotinsky gave, to inspire the refugees to sign up,” Brodetzky recalled.

The British agreed to create a relatively small unit known as the Zion Mule Corps, then expanded it into the Jewish Legion, consisting of five full battalions. It was the first Jewish army in nearly 2,000 years. The legion played an important role in the battles that brought about the liberation of Palestine from the Turks in 1918.

Jewish Legion members took part in the defense of Jerusalem against Arab rioters in 1920. After the British disbanded the legion, some of its veterans joined up with the Jewish underground militias that ultimately fought for the creation of Israel.

The Brodetzky family, for its part, in the 1920s lived in Michigan City (Indiana), Chicago, and Brooklyn, where young Moshe became active in Hashomer Hadati, the youth wing of the Mizrachi movement (today known as the Religious Zionists of America). The family returned to British Palestine in 1934, and Moshe later served with the Irgun Zvai Leumi, headed by Menachem Begin, in Israel’s 1948 War of Independence.

It was historical irony, twice over: the first generation of Jews exiled to Egypt had helped bring about the liberation of Palestine from the Turks, and the second generation played its own part in freeing the Land of Israel from the British three decades later.