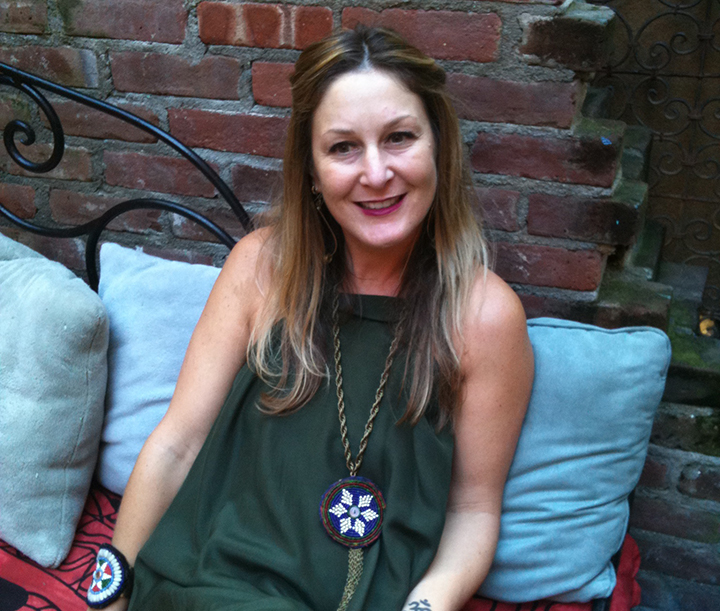 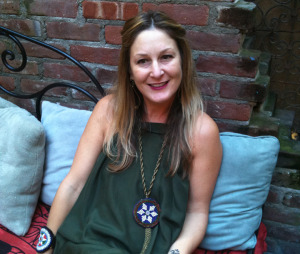 With clients like Michelle Obama, Beyoncé, Britney Spears and Oprah, Stephanie Wells needs no introduction in the fashion world. The San Diego-based jewelry designer and owner of Double Happiness Jewelry is known for her thoughtful, eclectic and sometimes personalized handmade pieces made from quality gemstones and metals. Fabric, crystal and paper goods also find a home in her jewelry case, and no two items are the same.

She has been featured in countless magazines and is a favorite among more than a few celebrities, but has taken a small step out of the limelight for now, to focus on new projects, like raising her children, Golda and Geffen. A ninth generation descendant of the Baal Shem Tov, Wells even has a small Judaica collection with pieces for children and adults. She is what you might call “a cool Jew,” and you’ll feel like you’re talking to an old friend if you have the occasion to meet her. Wells spoke with L’CHAIM about her rise to fame, her step back, and what’s next.

LCHAIM: How did you become a jewelry designer?

STEPHANIE WELLS: Fourteen years ago I went from a high-powered finance job in the states to teaching English to Palestinians and Jews in Jerusalem. I was there for six months, and then I moved to Tel Aviv, where I lived for two and half years before deciding that I wanted to come home. But first, I went to Ethiopia and India and backpacked around. When I came back, I lived out of my backpack because my things hadn’t come back from Israel. One item that I had with me was a seed bead necklace that I had gotten from the Bedouin kids in the Sinai desert, and I wore it around my waist. [Someone who saw me wearing it] and bought it for $45. I took that $45 to a bead store and tried to learn how to replicate that necklace, and that’s how I started my business and named it Double Happiness.

Then, I grew into stones because I love semi-precious stones, and I wore and sold the pieces as I was wearing them. Meanwhile, my sister wanted to quit her job in New York, so she came to visit me and saw the jewelry I was wearing, brought it back with her to New York, and started to represent my line [there]. The next thing I knew, my jewelry was in Saks Fifth Avenue and in Anthropologie and all these major stores.

STEPHANIE WELLS: The meaning behind Double Happiness came from what I call a karmic chain reaction: When you wear my jewelry, people notice you and you get confidence, take that in, and spread it. So we will adorn your body and your home while aligning your energy.

LCHAIM: When did you get your “big break”?

STEPHANIE WELLS: After my sister started to represent me, I presented my line at Fresh Faces in Fashion, a major event in New York. There was one email that changed my life, and it said, “Congratulations, you have been accepted.” I didn’t apply to this program, and out of thousands of applicants I got in based off of photographs of my jewelry submitted by my sister. I was the only jewelry designer there, and I launched my collection at the same show that Zac Posen launched his. Overnight, I had the news calling, magazines calling, MTV … everything was happening.

Eventually, we grew into a business where I had a 2,200 square-foot office space with 15 employees. I was approached by a publishing company to write a book about making earrings, which became the number eight best-selling craft book for 2010; and that turned into a TV show on Jewelry Television. It was really crazy, but my kids were 6 and 2, respectively, so I started to think about winding down a bit.

LCHAIM: What did you do during that time?

STEPHANIE WELLS: I started to prioritize my life and my values and my family, and I let go of what so many people dream of. I was there, [at the top] and I just didn’t want it anymore, so I scaled back.

I started working in my home studio on smaller projects, and with a few select clients. I found a love for interior design and began to experiment with chandeliers, giving them the “double happiness” touch. My first piece was picked up by the JCC and still hangs in the sacred space at the La Jolla campus. I wanted it to be whimsical, and although it’s not obvious, if you look inside, you will see a bird in its nest.

LCHAIM: Is that what you are working on now?

STEPHANIE WELLS: Well, my vision with home furnishings is to show people the properties of stones and the values of stones. There is an element of the metaphysical and lore surrounding stones. For example, amethyst is a very powerful stone, with the power to reduce cravings. So my vision is to create home furnishings using semi precious stones. There is an element of whimsy there too, so you will see fabrics and what I have done with clay and wood and silk in my jewelry will be represented in these new pieces.

Now, people will be able to customize their space based on the type of energy they want in their home, in the same way that we are able to choose the pieces of jewelry we wear. What I hear people say about my jewelry is that they wear it and they get compliments on it, and they take that energy in, they feel good, and when they interact with the world, they share that energy. So, I am going for the same feeling with items for the home.

LCHAIM: What is your favorite material to work with?

STEPHANIE WELLS: I am obsessed with agate right now. I like working with lots of materials, but the thing that I love about agate and lighting is that it is semi-opaque, so if you put it somewhere where there will be light behind it, that light will just emanate out of the piece.

LCHAIM: How has it been to see your work being worn by celebrities?

STEPHANIE WELLS: I still can’t believe it. When people call and ask for my pieces, it’s unreal. Oprah bought her first pair of double happiness earrings at a store in Malibu, and wore them right after she got her ears pierced on her show. That same day, Carrie Underwood won American Idol in one of my pieces. It was the craziest day, but it was really exciting, and it’s been a really interesting road.

STEPHANIE WELLS: Because of my jewelry, I have gotten to know people; producers and publicists, and I just finalized a contract to work with the TBS network to use my chandeliers in an upcoming television show this fall. I want to do more with pieces for the home. I want to do Shabbat candlesticks in addition to the chandeliers, and I will continue to make jewelry.