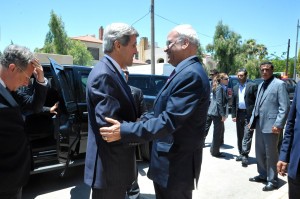 U.S. Secretary of State John Kerry is greeted by Saeb Erekat, chief negotiator for the Palestinian Authority in the eventually collapsed American-brokered Israel-Palestinian peace talks, before a meeting in Amman, Jordan, on June 28, 2013.

Speaking to a British television network this week, U.K. Prime Minister David Cameron lamented that “facts on the ground” were on the verge of wrecking the prospects for a two-state solution to the Israeli-Palestinian conflict.

Cameron, it should be said, has consistently supported Israel’s right to defend itself from the stream of rocket attacks launched from Hamas-ruled Gaza. At the same time, he believes that there is no substitute for a robust, lasting political solution.

That is why his anxiety about the two-state solution is likely shared by other world leaders. What’s so frustrating, the international community reasons, is that everyone knows what a final settlement will look like, yet no one is willing to take the steps necessary to get us there.

Insofar as a negotiated two-state solution is essentially a pipe dream at the present time, I think Cameron is correct to be worried. One of the reasons it’s a pipe dream is because, especially on the Palestinian side, the consensus behind it isn’t nearly as strong as Cameron and others would like us to think. Hamas rejects it outright, of course, because its goal—as CBS’s Charlie Rose confirmed when he recently interviewed Hamas leader Khaled Mashaal—is the elimination of the Jewish state.

The Fatah movement of Palestinian Authority (PA) President Mahmoud Abbas is formally committed to a two-state solution, but its continued backing of the “right of return” for the descendants of Palestinian refugees, as well as its pursuit of unilateral recognition in international bodies, has left Israelis skeptical.

As for the Israeli government, it’s no secret that any willingness there may have been to make territorial concessions to the PA has been badly eroded by both the kidnapping and murder of three Israeli teenagers in the West Bank and the renewed missile attacks from Gaza—after, remember, Fatah and Hamas formed a unity government of sorts.

In this grim context, appeals for an immediate, unconditional cease-fire in Gaza—a stance shared by the Obama administration, the U.N., and the Europeans—seem rather fanciful. Examined from the Israeli perspective, this demand is actually counter-productive. For if world leaders seriously think that the Israelis will return, when it comes to Gaza, to the status quo ante, then they either don’t understand or don’t care about Israel’s strategic calculus.

There are two big decisions facing Israel right now. The first one concerns the end goals of Operation Protective Edge in Gaza. The second one concerns its future relations with the U.S. Both are closely related, but all indications suggest that Jerusalem regards the first as more pressing than the second.

A growing chorus of influential voices in Israel, from right-wing Jewish Home party leader Minister Naftali Bennett to the respected historian Benny Morris, is arguing that Israel needs to finish the job in Gaza. What that means, ultimately, is the defeat of Hamas militarily and politically. The Israel Defense Forces is reported to have made good progress in destroying the network of attack tunnels constructed by Hamas beneath the ground in Gaza (at the same time, as much of the Hebrew press has recently noted, that the general realization dawned that successive Israeli governments had misread the strategic threat posed by these below-the-surface corridors).

Egypt, too, has joined the Israeli efforts to choke Hamas, destroying tunnels connecting the Sinai and Gaza. In these circumstances, it is hardly sensible to allow Hamas the breathing space that a cease-fire would afford. Instead of permitting Hamas to regroup and rebuild, the logic goes, strike the killer blow in the coming days.

This is not a conclusion that the Obama administration wants Israel to reach—and that, ironically, provides another reason for the Israelis to bring Hamas rule in Gaza to an end. Given that this administration has over two years left in office, Israel wants to avoid another Gazan firestorm, say six months from now, that would lead to yet more demands from Washington for an immediate cease-fire and more opprobrium against the IDF’s field operations.

With Hamas out of the picture, Israel is in a much better position to talk about peace and Palestinian statehood. Moreover, there will be an understandable desire among the battered Gazan population for a new authority to fill the vacuum left by Hamas, and that outcome can’t be secured without Israel’s consent.

I don’t believe that much diplomatic progress will be made while President Barack Obama remains in the White House. Trust between the Israeli and American governments has declined sharply, to the point where questions are being raised about Secretary of State John Kerry’s personal commitment to the alliance with Israel. All I’ll say for now is that there is reason to doubt Kerry’s commitment—he hasn’t taken Israeli concerns over Iran sanctions at all seriously, he has warned apocalyptically that Israel faces boycotts and isolation, and he was amiably cooking up a cease-fire proposal with the Turkish foreign minister just days after Turkish Prime Minister Recep Tayyip Erdogan declared that Israel was worse than Hitler.

Three to five years from now, the twin absences of the Hamas military threat and Obama’s bungling diplomacy may propel genuinely meaningful negotiations. In large part that will depend on who is in the White House. For now, though, Israel’s first priority is its national security. That is how it should be.

Ben Cohen is the Shillman Analyst for JNS.org and a contributor to the Wall Street Journal, Commentary, Haaretz, and other publications. His book, “Some Of My Best Friends: A Journey Through Twenty-First Century Antisemitism” (Edition Critic, 2014), is now available through Amazon.

U.S. tries to clean up its Middle East messes

Charlene Seidle chosen as next CEO of JCF