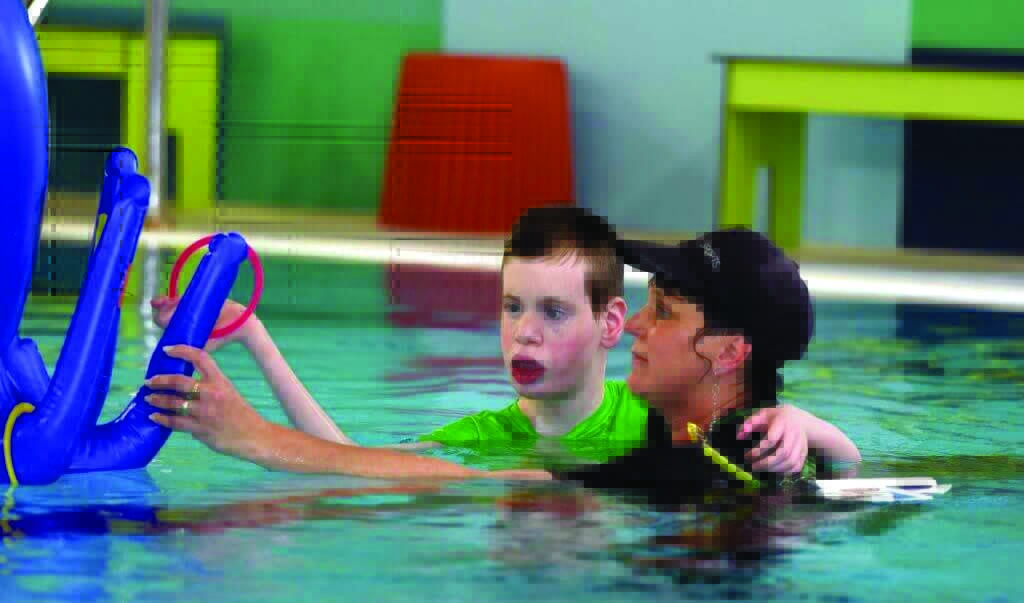 A hydrotherapy center in Israel is the first to use an augmentative alternative communication system that allows the nonverbal to express their feelings to caregivers, support staff, therapists and lifeguards via special communication boards placed around the pool. 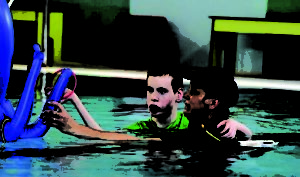 As the summer heats up, families around the world are taking refuge in the cool, relaxing waters of their local pools. In addition to providing a seasonal and healthy way to beat the heat, pool time also serves as an outlet for children to release their pent-up energy following the long school year, and creates opportunities for families to connect and let loose.

In a word, pools represent freedom, a buoyant escape from the confines of life.

However, what most people don’t realize is that pools can also represent potential, as the weightlessness and relative calm that exists in the water helps children with severe complex disabilities feel free and unrestricted, and often leads to growth well beyond their initial prognoses. In some cases, children who were never expected to walk are able to take their first steps following extensive hydrotherapy.

“The parents send us videos of their children walking around the house,” said Timna Vaknin, a special-education teacher at ALEH, Israel’s network of care for children with severe complex disabilities. “It’s incredible to hear them crying with joy as they count every step. They just can’t believe that their child is able to walk.”

Its Jerusalem residential and rehabilitative facility inaugurated a state-of-the-art hydrotherapy pool last spring, providing its students with easy access to the water-based therapies that allow them to build muscle mass, improve mobility and move freely and without pain.

The hydrotherapy center is the first of its kind in Israel to use an augmentative alternative communication (AAC) system, enhancing the experience for ALEH’s nonverbal students by allowing them to express their wishes and emotions to caregivers, support staff, therapists and lifeguards via special communication boards placed strategically around the pool. This fairly simple yet enlightening system has set the standard for other hydrotherapy pools serving the disability community across the country.

Each resident and special-education student is assigned to a hydrotherapist who knows their individual strengths, weaknesses, achievements and goals. As the children are unable to speak, staff members are always on hand to assist and guide the hydrotherapists, serving as a go-between to interpret each child’s likes and dislikes.

“The pool is the best of both worlds. It’s a place where the children can have fun, as well as a platform for their growth, where we can help them develop their emotional, sensory, motor, and media skills; reach goals; and even exceed expectations,” explained Vaknin.

Remarkably, the hydrotherapy center has already seen huge successes in the short period of time since its grand opening. One such success story is Eliyahu, an adolescent with very complicated special needs who was afraid to exert himself physically. For years, the staff did everything for Eliyahu and struggled to motivate him to take his first few steps. When they could coax him into the standing position, every attempt to walk ended the same way: Eliyahu would take a single step and freeze, instantly debilitated by fear of tackling the task on his own.

“We decided that one of his goals would be to walk five or six steps by the end of the year,” said Vaknin. “We work with Eliyahu and his hydrotherapist for months. After Eliyahu was able to walk from one edge of the pool to the other with no extra support, he was able to conquer his fears out of the water. Today, he can walk about 15 steps independently outside of the pool.”

Vaknin was amazed by how quickly Eliyahu took to the water, doing things he had never attempted before. “I believed that he would be able to walk eventually, but I never imagined he would make so much progress so quickly. After reaching far beyond his goal, we decided to raise the bar and started working with him on walking up the stairs.”

The philosophy employed by Vaknin and the rest of the staff is to ease the children into their hydrotherapy sessions and remove anything that makes them feel uncomfortable so that the children associate water with a positive experience. As the staff has seen firsthand, the children can only harness the powers of hydrotherapy to overcome their fears if they feel calm and confident in the water.

Pe’eri, a 7-year-old girl with severe disabilities, who is unable to crawl, walk or eat on her own, is the prime example. After a month of sitting next to the pool in a swimsuit refusing to enter the pool, Pe’eri finally agreed to take the plunge. The first step was to build her confidence in the water while integrating her into group activities.

Previously, during physiotherapy treatments on the treadmill, Pe’eri would just sit down, as she didn’t understand the mechanics of walking and found it difficult to carry her own body weight. After intensive hydrotherapy work in the pool, it became noticeably easier for her to learn how to move around. Following several months of moving her feet in a walking motion in the pool, weights were added to her legs to increase resistance. Recently, Pe’eri started walking properly on the treadmill, pushing herself ever forward.

“I look forward to the hydrotherapy session all week because I can actually see how much happiness and serenity it brings the ALEH residents and special-education students,” said Vaknin. “There are children who weep tears of joy in the pool, and they constantly express their desire to progress—not with words, but with body language and sounds. Even when they are in the elevator on the way to the pool, we hear them uttering sounds of joy and excitement. It is amazing to see that what we do in the pool has such a marked impact outside the pool.”

In addition to the hard work put in by the children and staff, the involvement of parents remains key to the children’s continued developmental success. With this understanding, the staff involves the parents every step of the way, sending photos and videos of their children at the pool and inviting them to the hydrotherapy sessions to watch their children’s progress in real-time. Sitting poolside, parents cheer on their children and learn how to do the exercises with their children for their next family trip to the neighborhood pool.

“It’s incredible that my son gets to enjoy the pool just like everyone else, and that I get to be front and center to watch his progress,” said the mother of Eliyair, a young boy with a tracheostomy, who is usually connected to an oxygen machine. While Eliyair’s special needs were initially viewed as too complex for hydrotherapy, ALEH found a way to make it work after his mother advocated on his behalf and pledged to be there beside him to assist.

“Every session, I get into the water with Eliyair to allow the hydrotherapist to work with him and help him reach maximum movement and his greatest potential. We work as a team, and Eliyair continues to improve, one step at a time,” reported his mother. “It is thrilling to watch, and I am eternally grateful for the gifts he is receiving here: hope, courage and freedom.”

Eleanor Roosevelt’s Efforts to Save Jewish Refugees From The Holocaust