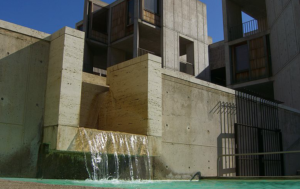 Louis Kahn (1901–74) was one of the most influential architects of the twentieth century. With complex spatial compositions and a choreographic mastery of light, Kahn created buildings of archaic beauty and powerful universal symbolism. His work impacted many of his contemporaries and still serves today as a model and measure among architects, especially those of the younger generation.

Louis Kahn: The Power of Architecture, opens November 5 at The San Diego Museum of Art and is the first retrospective of Louis Kahn’s work in two decades, presenting over 200 objects related to his selected buildings and projects in the form of architectural models, plans, original drawings, photographs, films, and more. Dignified, beautiful, and imbued with a powerful universal symbolism, Kahn’s designs remain a testament to his belief that architecture should be monumental and spiritually inspiring. Among his most famous works are the Salk Institute in La Jolla; the Kimbell Art Museum in Forth Worth, Texas; and, most recently, the Franklin D. Roosevelt Four Freedoms Park on Roosevelt Island in New York City.

Born to a Jewish family in Estonia, Kahn and his family emigrated to the United States when he was a child. Studying architecture at the University of Pennsylvania, Kahn opened his own firm in 1935.

Kahn’s eventual acclaim is based on a small number of buildings that were erected over a short period of just 25 years. While his early work focused on housing and urban planning in his home city of Philadelphia, he started to gain a worldwide reputation toward the end of the 1950s as an architect of public edifices. Kahn designed museums, laboratories, schools, churches, and synagogues. For a long time he was exclusively active in the United States, yet his later work took on an increasingly global dimension. Consequently, two of his most important projects were executed in India and Bangladesh — the Indian Institute of Management in Ahmedabad (1962–74) and the National Assembly Building in Dhaka (1962–83).

The exhibition presents Kahn’s work within the framework of six central themes, which also demonstrate the chronological development of his oeuvre: from his pioneering role in the exploration of science and engineering to his reinterpretation of architectural history; from his designs for houses in Pennsylvania to his inclusion of nature and landscape as fundamental  elements of architecture; and from his beginnings as an urban planner in Philadelphia to his interest in the public role and social responsibility of architecture, which culminated in Dhaka.

Kahn regarded himself as part of a tradition that understood architecture not only as a means of satisfying utilitarian needs, but as an instrument of artistic speculation and a way of contemplating nature, history, and human community. In today’s world, where the act of building is increasingly subordinate to marketing strategies and financial speculation, Kahn reminds us of the age-old significance of architecture as the universal conscience of humanity.

Louis Kahn: The Power of Architecture will be accompanied by an exhibition of architectural photography from students of the Woodbury University School of Architecture. The Museum will also present a symposium on Saturday, Nov.5, 2016, featuring Ariel Plotek, Curator of Modern & Contemporary Art, The San Diego Museum of Art; Wendy Lesser, editor of The Threepenny Review and author of the forthcoming biography, You Say to Brick: The Life of Louis Kahn (due in spring 2017); and William Whitaker, Curator and Collections Manager, Architectural Archives of the University of Pennsylvania School of Design. Whitaker oversees the Louis Kahn archives at the University of Pennsylvania and served as curatorial consultant for the development of the exhibition. The Museum will also screen the film My Architect, A Son’s Journey, presented by the director and Kahn’s son, Nathaniel Kahn, on January 13.

Visit SDMArt.org for additional programming and workshops that accompany this extraordinary exhibition.