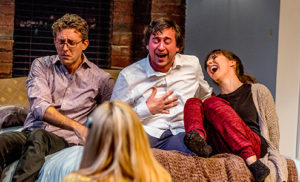 Disclosure. I am not a professional reviewer. My MFA-nonexistent. I am a local actor and playwright who loves local theatre. My reviews will be very different from other reviews offered throughout this town as I hope to convey a more “every person” view of what I just experienced. I know I won’t be as precise or even as poetic as my fellow reviewers, but ultimately I hope to accomplish my one true goal…have more people attend local theatre. I also wish to disclose I will not be giving a Cliffs Notes recap of the plot and avoiding any potential spoilers. This again is to convince the reader to GO TO THE THEATRE! Because in today’s world, we sure as hell need good dialogue and even better art.

Cue the literal segway to Cygnet Theatre’s Bad Jews written by Joshua Harmon. And if something Bad Jews will accomplish is open a pathway to interesting dialogue post show. Isn’t that what good theatre should do?

Bad Jews plot revolves around four characters. Liam and Jonah are brothers and are “forced” to spend the night with Cousin Daphna (or is it Diana) in their ritzy New York studio apartment. Daphna is in town after the death of their holocaust surviving “Poppy” (grandfather). The forth character is Melody, Liam’s very blond and very Delaware non-Jewish girlfriend, who together with Liam were skiing the slopes when “Poppy” passed on and were not at the funeral yet arrived for the shive. The main conflict arises after Daphna makes it known to Liam she would like “Poppy’s” Chai necklace (which survived the holocaust) to be given to her due to her being “a good Jew.” (Again this is a very brief synopsis of the play and I have purposely left a lot of things out.)

Now I know the title might be alarming to people and some might actually think to themselves well that’s just plain racist. Well let me throw some much needed Pesach saltwater on those thoughts…it’s not. To me the title is a brilliant way of setting the perennial table of thought and discussion for the audience. It asks, which one of these characters is actually a bad Jew? Am I a bad Jew? And you don’t have to be Jewish to ask this of yourself, feel free to insert Christian or Muslim or even Atheist, it truly doesn’t matter. Bad Jews accomplished this with brilliant staging by director (and Associate Artistic Director) Rob Lufty and his incredible cast. The “Super Jew” (as prompted by the program) is played magnificently by Danielle Frimer, her portrayal of Isrrrrael bound Daphna is a standout performance. Josh Odsess-Rubin’s strong and argumentative Liam takes control of the stage when needed. At no time is the audience questioning who is running this family, it’s either #TeamDaphna or #TeamLiam. And in the middle of this family feud is Jonah, played by Tom Zohar, and Melody, played by Katie Sapper. I loved Zohar’s choices as an actor. It would’ve been very easy to try to overact this character, in order for “the audience to not forget him.” But he is so perfectly woven into the background, it makes his character that much stronger. And finally the bubbly Melody, which garners an amazing performance (even the song) turned in by Sapper which hopefully had the audience sympathizing with the poor girl from Delaware. Danita Lee’s costumes are contemporary and more importantly believable while R. Craig Wolf’s lighting design is subtle and spot on. Sean Fanning’s set design is meticulously detailed and beautiful. Fanning truly is an artist who is turning out one beautiful set after another in local San Diego productions.

Look, theatre in most parts shouldn’t be difficult, I equate it to baking a cake. Put the right ingredients together and you’re going to have a tasty dish. The cast and crew of Bad Jews have provided San Diego with a delicate piece of art, both contemporary and historical. It expertly demands the audience to think and discuss how this story is seen in today’s world. Family and the importance of our history should still mean something right? Right? In the end, all that matters is that we’re involved in a meaningful dialogue of what it takes to be a good person…a good Jew…or maybe, even a bad one.

Bad Jews runs through February 12 and you can find tickets by visiting cygnettheatre.com or calling their box office at 619-337-1525.