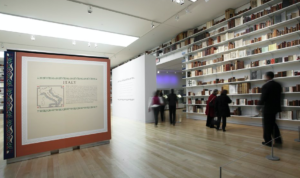 The Valmadonna collection on display at Sotheby’s in New York, before it was sold to Israel’s national library. PHOTO COURTESY Sotheby’s.

On the right, a man sits and prays holding a liturgical book. On the left, a rabbi is seen explaining the story of the Jewish exodus from Egypt to a child. These images were printed on the pages of a Passover haggadah in the city of Prague in 1556.

This nearly 500-year-old haggadah, one of only two remaining copies, is part of the Valmadonna Trust Library collection that was recently sold to the National Library of Israel, with the help of philanthropy from the Haim and Hana Salomon Fund.

“The haggadah is the most widely published book in Jewish history,” says Sharon Mintz, senior consultant for Judaica at the Sotheby’s auction house, which arranged the sale to the Israeli library.

Mintz says that more than 3,000 editions of the haggadah have been printed during the last several centuries—more than the Bible.

In particular, the Valmadonna collection’s 1556 Haggadah is a rare, luxury edition with Yiddish interpolations that “constitute the earliest examples of such texts,” says Marc Michael Epstein, the Professor of Religion and Visual Culture and the Mattie M. Paschall (1899) & Norman Davis Chair at Vassar College in New York.

The haggadah’s place in printing history

Just a few decades after Johannes Gutenberg invented the printing press around 1440, printing spread to the Jewish world, beginning in Rome and then moving throughout Italy and the Iberian Peninsula. Scholars tend to refer to the era of early printing, before 1501, as the Incunabula period.

Jews were “tremendously excited” to be able to print multiple books, Mintz explained. “They viewed it as a gift of God,” she says.

The earliest printed haggadah was printed in Spain in 1482. Another early haggadah dates to roughly 1486, and was published by the Soncino family, named for the Italian town where the family ran its printing operation. These early haggadahs were not illustrated. The earliest known illustrated haggadah was printed in Constantinople (modern Istanbul) around 1515, but only a few pages of this haggadah remain.

Jewish printing spread to other parts of Europe in the 1500s, which also led to a growth in competition among printers.

“The cradle of Hebrew printing is, of course, Venice. But the printing of Jewish books north of the Alps began in Prague in 1512 in the circle of Gershom ben Solomon Kohen and his brother Gronem,” says Epstein, who is the author of “Skies of Parchment, Seas of Ink: Jewish Illuminated Manuscripts” and “The Medieval Haggadah: Art, Narrative, and Religious Imagination.”

“Due to the humanistic patronage of the Holy Roman Emperor and a general climate of relative tolerance and free trade, Prague in the 16th century was a place of vibrant of Jewish communal and cultural life, and thus — along with Venice — a crucial center of the newly developed art and craft of Hebrew printing,” he says. “Jewish printing spread from Prague throughout Western as well as Eastern Europe, the next great centers being in the Polish communities such as Lublin.”

By 1526, the family of Gershom ben Solomon Kohen, which also went by the name Katz and built an important and influential Jewish printing house, produced a printed, illustrated haggadah that has become known as the Prague Haggadah, and is the earliest complete illustrated haggadah in existence.

The 1526 haggadah is notable for the 60 woodcut illustrations accompanying its text, a number that Epstein called “extraordinary.”

“That number means that illustrations as a means of commentary were deemed to be central to the enterprise of printing and disseminating the haggadah,” he says.

In 1556, the Katz family printed the Haggadah whose copy is in the Valmadonna collection. This haggadah utilizes some of the same illustrations from the 1526 haggadah, as well as several original illustrations. For example, one illustration features a depiction of Moses.

“[Moses] appears in the 1526 edition, but in the 1556 edition he has horns. Michelangelo’s ‘Moses’ in Rome was completed in 1516. The famous horns on that statue seem to be Michelangelo’s response to the challenge of attempting to represent in sculptural form the light that streamed from Moses’s face from the time he descended from Mount Sinai [in Exodus 34:30]. The word ‘streamed’ and the word ‘horn’ both have the Hebrew root K-R-N, and thus the sculptural challenge converged with a display of grammatical punning,” Epstein explained.

“Michelangelo’s ‘Moses’ had conquered the aesthetic world of that time. Everyone who was anyone knew of it. So…the inclusion of horns in the 1556 image of Moses seems to indicate that fashionable Jews wanted to be in on the ‘new’ way of depicting him, however ‘un-Jewish’ this seemed. The message here is that ‘Jews are modern and fashionable, and aware of currents in the art world,'” the scholar added.

Dr. Yoel Finkelman, the Haim and Hanna Salomon Judaica Collection curator at the National Library of Israel, also says that the 1556 haggadah is “an amazing example of several phenomena.”

First, the haggadah provides examples of two unique fonts. One is a Hebrew font unique and identifiable to Prague from that period. The other is known as the most common font for printing in Yiddish at the time.

The other unique attribute of the 1556 haggadah is the fact that it is printed on parchment as opposed to paper. In that era, parchment-printed books were considered a luxury because parchment was more durable than paper, and was more expensive and harder to print on than paper.

Sotheby’s consultant Mintz also pointed out that this haggadah doesn’t open with the standard haggadah text, but instead with the text that is recited the night before Passover when Jews are traditionally required to search for hametz (leavened products) by candlelight at night, followed by the burning of that hametz.

“This printed haggadah begins with what one does on the eve of Passover,” Mintz says, adding that several songs that Jews associate with Passover today, such as Ehad Mi Yodea or Had Gadia, are not present in this haggadah because they became part of the Passover tradition in later times.

The Valmadonna collection was a “showstopper” when it was displayed at Sotheby’s before the sale to Israel, attracting more than 3,000 visitors a day, says Mintz.

“People were lining up for hours outside the door,” and “you could see all the spectrums of the Jewish people,” she says.

The collection was founded by Jack Lunzer, who Mintz described as a “passionate lover of Hebrew books and Jewish culture” who collected books for more than six decades and assembled the “largest private collection of Hebrew books in the world…one of the most significant collections.” Lunzer also assembled the largest collection of books printed on parchment, such as the 1556 haggadah. Notably, the collector possessed a copy of the Babylonian Talmud produced by the Christian printer Daniel Bomberg, which was sold in 2015—before the sale of his entire collection to Israel’s library—for the reported price of $9.3 million.

Finkelman says that aside from its acquisition of the Valmadonna collection, Israel’s national library is home to the world’s largest collection of haggadahs, including the haggadah from 1482, which was printed just 10 years before Jews were expelled from Spain. Additionally, the library houses a haggadah made by the communist movement in Ukraine during the 1930s—an alternative haggadah that was used to undermine Jewish religious practice, for example, by equating hametz with capitalism.

Israel’s national library is currently waiting for the arrival of the Valmadonna collection, which it plans to catalogue and unveil to public in a special event. The collection will also be displayed in the library’s new building, which is set to open in 2020.

The purchase of the Valmadonna collection, Finkelman says, is indicative of the library’s attempt to amass the world’s “most complete collection of Jewish printing.” 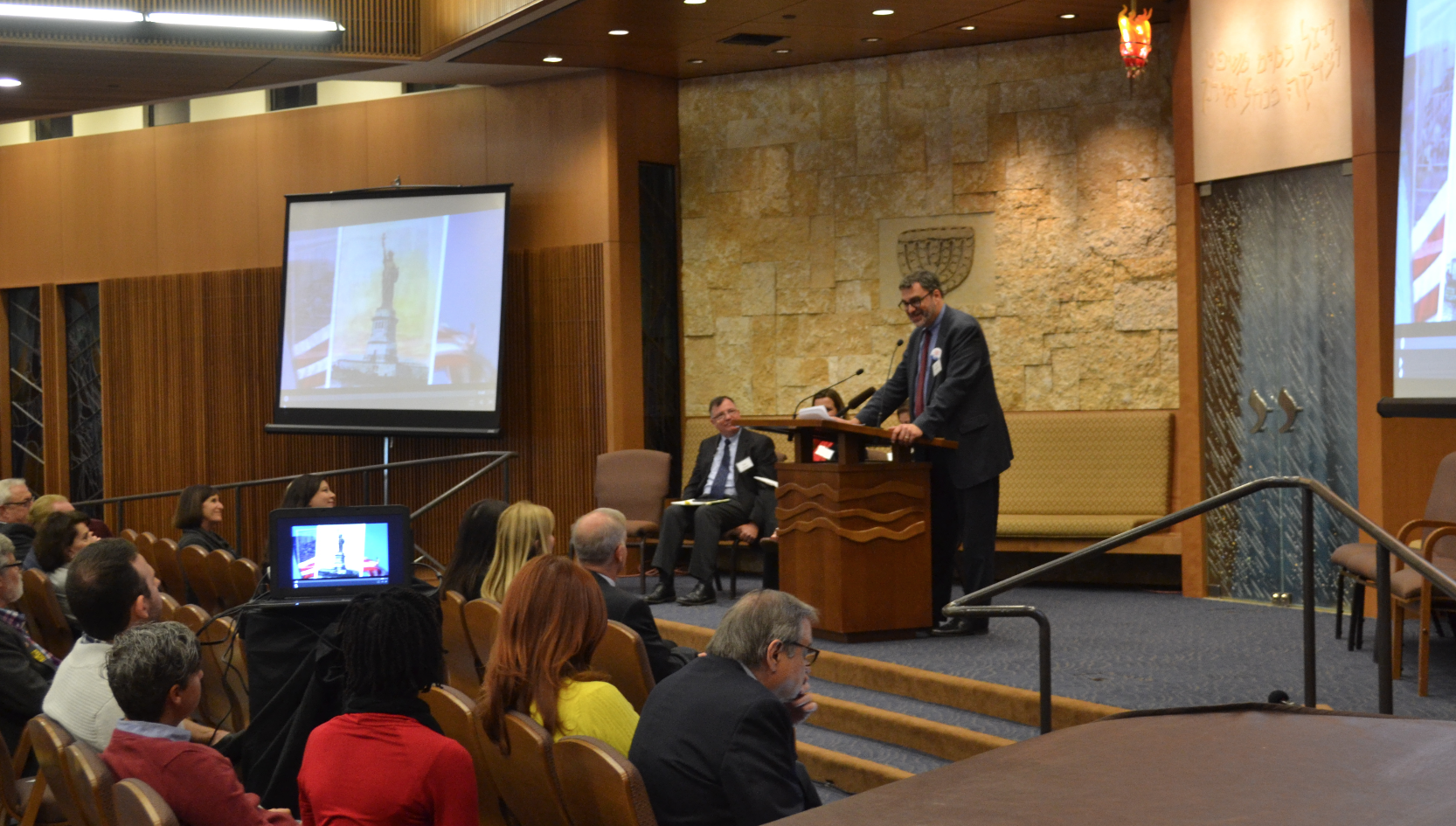