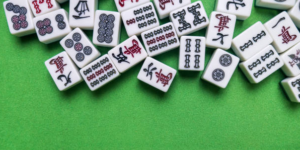 History shows that the game of Mahjongg is played by Chinese men in Peking as a way of male bonding and for gambling. History it’s been played in America by Jewish women in Brooklyn as an excuse to schmooze and nosh bagels, lox, and cream cheese.

This ancient pastime of Mahjongg, which is abbreviated by American players to “Mahj”, had its start in China at the time of Confucius: we’re talking about 3000 years here. It remained in the East as a game played by royalty with an almost religious secretive aspect surrounding it. It was also used as their form of a superstitious tradition to instill order into their lives.

In the 1920’s, with the overthrow of royalty, the game of Mahjongg began leaking out. An American oil executive, Joseph Babcock, discovered it and smuggled it out of China and brought it to the U.S. It got a modest toe hold here and soon a group of Jewish women in Brooklyn stumbled upon it. At that time, there were a few common rules. In 1936 there were more than 21 different ways to play it depending on which Jewish group took it up. In 1937, New Yorker Dorothy Meyerson, compiled the definitive book on Mahjongg rules. Later that year, the National Mahjongg league was formed. This became the basis for the American style of Mahjongg, which is mostly commonly played today.

Mahjongg is simple to learn. I did this 50 years ago. I began having fun immediately and I’m still improving. Mahjongg is played with tiles that have symbols embedded on them. These symbols are easy to learn. Today the Mahjongg league rules, while being the most popular, are not the only way it is played. Many play the ancient Chinese way and there is a widespread fan base using the rules originated at the Wright Patterson Airforce base in Ohio.

In the 1950’s, the game took a slump, but at this time it’s gaining fantastic momentum. Virtually every city in America has group Meet Ups for “Mahj”. In addition, something unknown to Confucius, the internet has the brought the game to virtually everyone 24/7.

From my perspective, as a player and teacher for half a century, I am exposed to the social aspects of “Maj”. I get together with groups, and while we’re playing we exchange invaluable information: medical advice, cooking tips, movie reviews, restaurant experience, and on and on. In a word, everyone can easily learn, find a way to play, and have a source of entertainment for life.

Rita Kahn teaches groups and individuals. Contact her at sowhatdoit@yahoo.com for questions or further information.