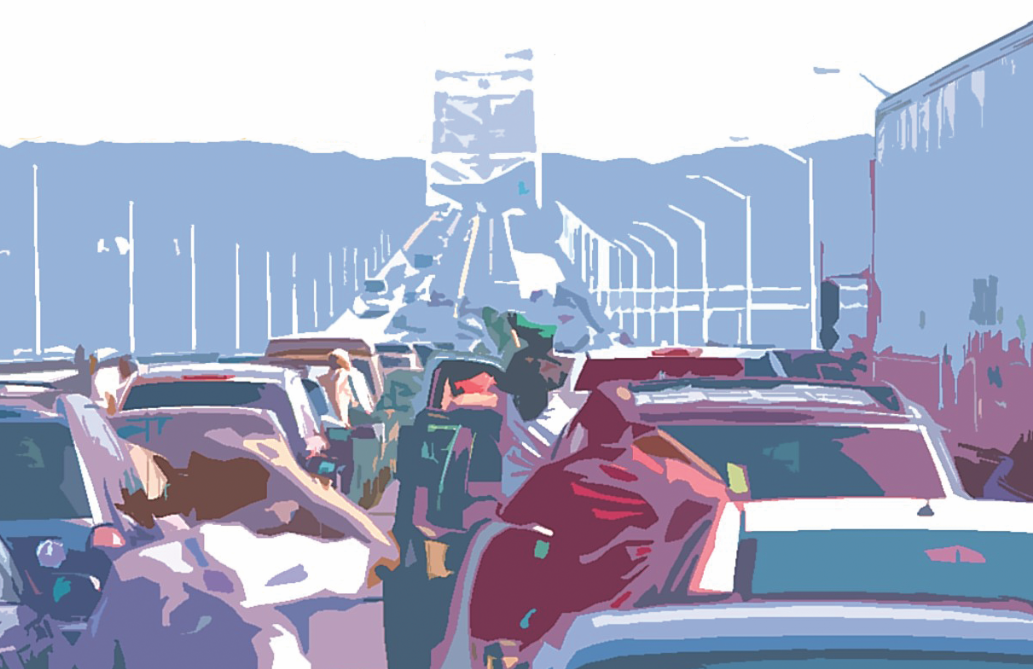 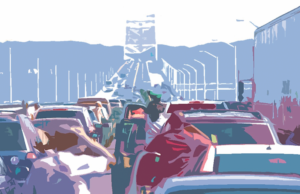 This month marked something very special for me. It was the commencement of rehearsals for a project that has been two years in the making.

Inspiration seems to pop up in very unique places. For me, it seems to come from two distinct places … the shower and my car … the latter being where this project was born. Gridlock sprouted wings as I sat in bumper to bumper traffic on the freeway heading home. As I looked around at the other drivers, I began seeing a mosaic of differences, a potpourri of people in cars. Everyone had a story different from the next. While some screamed into Bluetooth-connected cellphones, others just stared off into nowhere, their minds distant from the flood of red brake lights.

I arrived home that day and wrote the first two scenes of Gridlock. I went further back into my memory banks and harnessed another moment in my life when I sat in traffic for what seemed like an eternity. Back in 2009, a person decided to climb onto the ledge of the Cabrillo Bridge connecting Bankers Hill and Balboa Park overseeing the 163 freeway. At the time, I lived in the South Bay and exited L Street to find a parking lot on the 805 north. Soon news of the jumper reached my ears and anger ensued. That day, I had to present in front of my entire company and I knew I was going to be hours late. I never knew this jumper … but I knew I hated him/her. I didn’t care what their reasons were to attempt to end their life… all I cared about was my tardiness. I looked around at other people and you could feel the hate they also felt. It was palpable.

As the words clicked on my keyboard I created six total characters; four strangers stuck in traffic and two above them on a bridge, a person attempting to jump and a transient living on the bridge at the time. Gridlock was born.

People go to the theatre for a myriad of reasons. Anytime I write anything I want my audience to feel something. Feelings in today’s world have been muted (with the advent of Social Media our feelings are now tangible cyber code…Salomon is feeling blessed…tired…angry…happy…NO!). I wanted to create real people; the very people I have seen in my own experiences while stuck in gridlock. We go through so many emotions while stuck, both physically as well as emotionally. These characters are stuck and hopefully the audience will be able to see their transformations (or lack thereof) as they sit stuck in traffic.

One of the themes of Gridlock is suicide. To take one’s life, to me, is the last and ultimate cry for help, at times heard too late. According to the San Diego County Suicide Prevention Council, reported suicides in the county dropped from 441 in 2013 to 420 in 2014. Yet visits to the organization’s suicide website, www.up2sd.org/, rose from 98,960 two years ago to 134,574 in 2014. The character in Gridlock attempting to end their life is central to the progression of the story, and suicide prevention is real and important work.