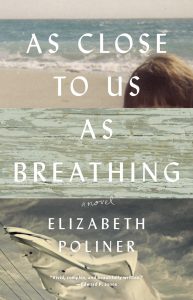 The cover of Elizabeth Poliner’s “As Close to Us as Breathing.” Credit: Lee Boudreaux Books.

“Writing is a messy process,” says author Elizabeth Poliner. “People who don’t write fiction would be surprised to see what early drafts could look like.”

But readers wouldn’t know “what a mess it was for the longest time,” as the Jewish author puts it, when reading Poliner’s critically acclaimed latest book, “As Close to Us as Breathing.” The volume garnered Amazon’s “Best Book” designation in March 2016 as well as rave reviews from the New York Times, W Magazine, NPR, People, Good Housekeeping, and Washingtonian.

Poliner, who thought of her book idea more than 10 years before she started writing it and then took six years to pen the novel, says that she held the idea at bay because of the number of characters involved.

“It was a difficult writing process because there were so many characters to develop and they had to wind their way through the story,” Poliner tells JNS.org.

“As Close to Us as Breathing” begins in 1948 and centers on three sisters—Ada, Vivie, and Bec—who come together each summer at “Bagel Beach,” a small stretch of the Woodmont, Conn., shoreline where at the time Jews flocked for their summer vacations. They stay at a beach house that was purchased by their parents and was left to the sisters as part of their inheritance. There, they experience a freedom they cannot enjoy in their daily lives back home.

Ada is the beautiful but somehow sinister sister, who stole Vivie’s boyfriend years prior, married him, bore three children, and is now trapped in a loveless marriage. Vivie, now the family diplomat, has essentially married herself—a man who is sickly but smart and loving. They have one daughter. And Bec is unmarried, battling between the life and values with which she was raised and her passionate, adulteress love affair with her boss.

The summers are full of hope and happiness for the sisters—until tragedy strikes. When Vivie’s youngest son is hit by an ice cream truck and dies, this alters the family dynamics forever, the summer of love and self-discovery transforms into a lifetime of repentance and regret for the members of this close-knit, intertwined family.

The book is told through the eyes of Ada’s 12-year-old daughter, Molly, at the time of the tragic accident. Molly serves as both the narrator and her own, complicated character that is battling the balance between “them and I” as she emerges from adolescence to adulthood.

“When I conceived of Molly, I didn’t know the role she would play in narrating everything,” Poliner says. “But as I was thinking about the story and was beginning to understand what happened that summer, I saw Molly as witness to everything. She is witness-at-large.”

But Poliner explains that while she is witness, she is also going through her own process of self-discovery, wondering who is she is and how she, as an individual, is connected to her web of family and extended family.

“This is a tension captured in the whole story,” says Poliner. “As she is narrating, she is herself and all of them at the same time.”

Poliner argues that this tension makes “As Close to Us as Breathing” a very Jewish story with a universal Jewish message that continues to resonate in 2016. Another theme of the book is the importance of passing on and adopting Jewish traditions, even as the world evolves around you.

Vivie’s son Howard is the first in the family to date outside the faith. He hides his relationship with Megan O’Donnell from his parents for a long time. But when it is discovered—the day of his younger brother’s accident—Howard holds with him guilt that perhaps, if he had not broken the Jewish tradition and laws so important to his parents, the accident never would have happened. He breaks from Megan immediately, but is changed for life.

“He dropped her as soon as Davy died,” Poliner writes in the book. “Howard’s connection to Megan was drawing forth qualities from within him he didn’t know he had: a will of his own, greater sensitivity.”

But when they saw each other one last time after the accident, he could no longer face her.

“If he could have he would have said to her, ‘That was self-indulgent, wasn’t it?’ speaking of their time together, the walks, the talking, the many kisses.’ I was a stupid jerk,’ he would have said, not meaning to hurt her, but rather to inform her of what had become of him,” writes Poliner.

Vivie’s husband, Mort, also struggles in the context of Jewish tradition—with whether or not he is effectively fulfilling the role his father bequeathed him to keep the faith and pass it onto his children.

“Standing there, hand clenched on the metal handle [of the synagogue door], one foot on the sidewalk outside the building, the other foot a step inside, he could almost taste it, the sweetness of entering the shul, the satisfaction he’d feel just a moment later, after closing the doors behind him to that whirlwind of American society, that melting pot of everyone from everywhere,” Poliner writes. “For a few minutes each day, behind the synagogue’s shut door, my father could pretend it was just them: the Jews. They were in a little shtetl somewhere in Eastern Europe, doing what Jews always did; they weren’t getting blown to pieces. Or, he sometimes imagined of late, they were in Israel, the Israel that could be once the current truce matured into a lasting peace.”

“I go to a Reform synagogue in Washington, DC now,” Poliner tells JNS.org. “The rabbi is concerned about whether people will find meaning in their Judaism. There is a sense of loss that kids today don’t even know some of the basic things we knew—just even cultural things, traditional foods. They are not even as familiar as we would have been.”

Yet the characters are not “just Jewish,” says the author. They are multi-dimensional—so much so that they feel alive. They have good and bad sides, strengths and weakness, hopes and fear. Poliner says they don’t represent anyone particular in her life, but that they are simply themselves.

“We are all living in a culture of one kind or another and in cultures there are expectations, there are rules, there are things that we push up against,” Poliner says. “The characters’ central struggle is to be their full selves in a culture that may or may not support that. I think this is a story, then, that a lot of people can identify with—whether they are Jewish or not.”