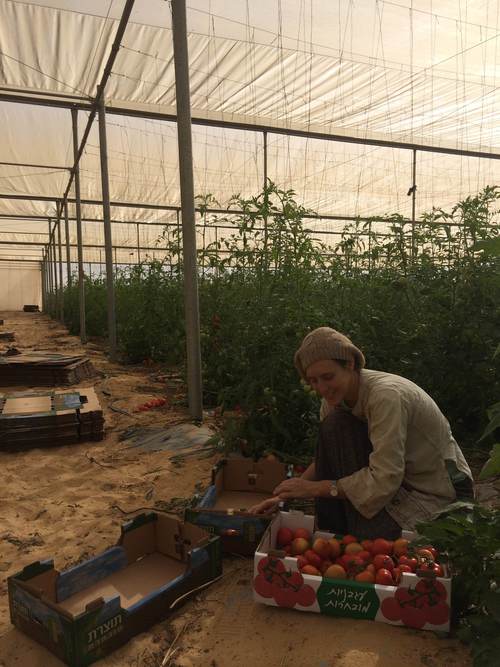 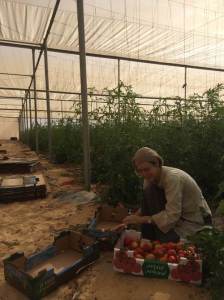 In southern Israel, the next generation of Jewish pioneers is making the desert bloom.

A group of young, Zionist, idealistic adults are cultivating a previously uninhabited area in the northwest Negev on Israel’s borders with Egypt and Gaza—growing tomatoes, potatoes, lettuce, cauliflower, pomegranates, olives, and more.

“I am there (in the Negev) because I can make a difference,” said Nava Uner, who lives in Bnei Netzarim, one of three Halutza (pioneer) communities in the Young Farmers Incubation Project.

The Jewish National Fund (JNF) established the project shortly after the 2005 unilateral disengagement from Gaza, one of the most polarizing events in Israel’s history. The Halutza planned communities are part of JNF’s Blueprint Negev campaign, which is aimed at developing southern Israel through infrastructure and jobs. The Negev comprises about 60 percent of Israel’s land, but only eight percent of Israeli citizens live there. But in recent years, the Negev has rapidly evolved into a hub of activity, with a new cyber-security park, an expanded Israel Defense Forces presence, and the growth of Ben-Gurion University of the Negev.

The Young Farmers Incubator Project—co-sponsored by the Ness Foundation, Karen Ferber, and Ellen Aschendorf—is part of the area’s innovative spirit, aiming to encourage young entrepreneurs who are looking to make a future working the land to stay and invest in their own farms in the Negev.

The area, however, is desert. In fact, the Negev is so dry that in 2001, when former prime minister Ehud Barak offered Yasser Arafat the area as part of a land-for-peace deal, Arafat turned it down over his concern that it is “a place of death. … Nothing could grow there.”

But today, these young farmers, with the support of veteran farmer mentors, are changing sand into the blossoms of a new beginning. They use hydroponics and scientific techniques developed in the former Gaza-based Jewish communities of Gush Katif to grow bug-free produce.

Yedidya Harush, JNF’s liaison for the Halutza communities, explained that when the communities were founded shortly after the disengagement by residents of Gush Katif, only 30 families took part in the plan. Yet the initiative grew steadily until four-and-a-half years later, there are now close to 400 families living in the three communities, with plans to grow to 15,000 families. The Young Farmers Project brought a younger cohort to the land, enabling first-time famers to lease greenhouse space with minimal capital down and low up-front costs for one agricultural season. In other parts of the country, several years’ capital could be required.

Uner, a South African immigrant, is one of those younger adults. She converted to Judaism after volunteering in a Negev kibbutz, where she met her husband. She spent the last several years studying in Jerusalem, but she and her husband wanted to return to the south. When they heard about the Young Farmers Project, they latched on.

“We became religious and we were looking for a place where we could keep growing spiritually,” Uner told JNS.org. “Everything is so new you feel like you are a part of the beginning of something new and special. It has its challenges, but being able to live and farm here—this is something I really enjoy, that I love. This is pioneering.”

Harush compared the 21st-century Israel pioneer to those of the past. He said they both face challenges and opportunities. When the first pioneers came to Israel after the Holocaust, they were tired and disenfranchised, with no government support and no infrastructure from which to draw. But they had world Jewry’s support and belief in building a Jewish state.

“The challenges we face today are that people think Israel is built and strong already, meaning we don’t need Zionism, which is very wrong,” Harush told JNS.org. “The second challenge is that we have to attract people to come because most people have the comfort of living in the center of Israel or even Be’er Sheva. Getting people is harder than it seems.”

But it is not impossible.

Jakir Manela—executive director of the Pearlstone Center, an educational Jewish farm in Maryland—said the impulse to work the land in Israel is deep and “strikes at the core of the Jewish soul.” He explained that many of the Jewish holidays and laws center on harvesting Israel.

“[The idea is] livnot u’lehibanot, to build the land and to be built by the experience,” he said.

Manela said he has seen children and adults who work on Pearlstone’s farm achieve tremendous growth and insight.

“I see an awakening, an excitement and a joy—a connection to the world and to God—through the experience [of being at Pearlstone],” Manela toldJNS.org. “Working the land is a window into the Jewish experience. That window is exponentially wider, deeper, and really higher in Israel.”

Beyond the spiritual and the ideal, there is also a strategic component to the Halutza communities. Harush said the area used to be a magnet for the smuggling of drugs, weapons, and woman. The Sudanese used the unoccupied border to cross illegally into Israel. Furthermore, terrorists were able to move relatively freely from Gaza to Egypt to Israel to carry out attacks.

The Halutza communities were struck hard by the recent war against Hamas; more than 70 rockets fell on their land. JNF provided 40 mobile bomb shelters to keep the population safe. While some residents did flee, Harush said most remained and additional families joined, even in recent months.

Until now, JNF has invested more than $6 million dollars in these communities. The organization is currently funding a $4 million medical center and a $2.5 million synagogue.

“Israel’s biggest national mission is the Negev,” said Harush. “We are Israel’s pioneers.”

WHAT JEW TALKING ABOUT?