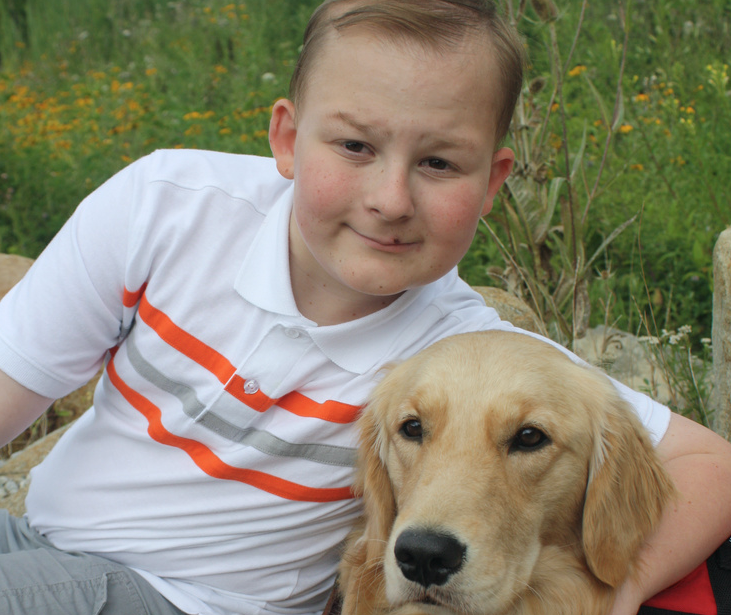 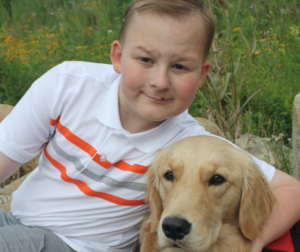 William (Baruch Nissan) Snyder is a vibrant 12-year-old boy. He loves baseball, football, swimming, riding his bike, and playing video games. He laughs heartily, his gigantic sense of humor shining through — with one hand on his special dog, Asha.

But like his Hebrew name, William is a blessed miracle. Each day of his last 10-and-a-half years has been a miracle.

Father Ron Snyder recalls that when William was around 7 months old, he and wife Lori felt “something didn’t seem right” with their firstborn son, who was experiencing twitching, severe night sweats, and seizures. The Baltimore family brought him to one doctor who ran some minor tests and signed him off as fine. They brought him to a hospital, where the boy was turned away.

But by age 1, when William showed no interest in walking, the parents tried again.

“Several doctors told us he would be fine; our parental instincts told us otherwise,” says Snyder.

On Labor Day 2004, at the age of 15 months, William was diagnosed by a Jewish doctor at Sinai Hospital in northwest Baltimore with a tumor that was “big and in a bad spot.”

The tumor was so large that it pressed against his brain stem.

“We felt helpless, confused, devastated, and scared that we were going to lose William long before his life had really begun,” says Snyder. “They gave him less than a 10 percent chance to live. At one point a doctor said, ‘Take lots of pictures. At least you’ll have the memories.’”

William was emergency-transported to Children’s National Medical Center in Washington, DC, where he underwent a 12-and-a-half-hour surgery to remove the tumor. While 90 percent of the tumor was removed successfully, the surgery caused his frail body to suffer from a stroke, which threw him into a weeklong coma. An infection delayed chemotherapy and that delay led to the cancer’s return, this time not only in his brain, but down through his spine.

“It looked like someone had poured salt and sugar all over — you could see cancer specs all over,” Snyder says. “We were debating whether to do treatment. Finally, the doctors agreed to do one round of chemo. They said that if nothing happens, then they would have to make tough decisions about sending him to hospice. No one was hopeful.”

Snyder recounts that when his son went in for the chemo treatment, he went down to the hospital’s sanctuary and prayed — and prayed and prayed. When he came up, William opened his eyes, had a little color back, and moved his mouth a little. The doctors ran another MRI, likely to show the parents that the treatment was ineffective, explains Snyder. While the family waited for the results, Snyder again returned to the sanctuary.

“I just went there and prayed some more,” says Snyder. “There was nothing else to do.”

When he returned to meet with the doctor, the children’s ward was frantic. All the doctors were running around, as Snyder describes it.

“All the spots on William’s spine were gone,” Snyder says. “One round of chemo and it was gone. There was a little spot left on the left brain and second surgery removed it. He has been clean ever since. He has been clean for almost 11 years.”

Snyder adds, “It was a miracle.”

William still experienced more than 12 months of additional treatments to ensure he stayed cancer-free, including numerous blood and platelet transfusions as well as severe skin burns from the additional chemo. The child’s only adventure for the year was taking a ride around the hospital floor in a wagon with an IV pole attached. But he pulled through. William is deaf in one ear, hard of hearing in the other, and nearly blind, and he suffers from several learning disabilities.

“Still, we know what a miracle it is for him to be alive today,” says Snyder. “Many of William’s friends at the hospital did not make it.…He is a true warrior.”

According to Chabad.org, many miracles, great and small, are celebrated and commemorated on Chanukah. But there is one particular miracle that is the sum and substance of the holiday: the miracle of the small cruse of pure oil that burned for eight days. It is the miracle of a tiny pitcher that brought so much light. Snyder says William is the family’s little miracle.

Even if William had undergone radiation, as would have been the normative protocol for such a diagnosis, he would have likely been a vegetable today—unable to walk, eat, or even breathe on his own. Instead, he is a corky pre-teen that teases his 9-year-old twin sisters and pets his special dog with an infectious giggle.

To this day, every time William does a brain scan—about every four to six months—Snyder goes down to the hospital sanctuary and prays. Snyder says he is not “observant” in the traditional sense of the word, not attending synagogue regularly nor wearing a yarmulke.

“Yet I daven (pray) right before he scans; I believe it.…Of course there was medical science. I believe in science, too. But I don’t believe William could have pulled out without faith — without God’s hand,” says Snyder.

In a recent piece about Chanukah, Rabbi Lord Jonathan Sacks, the former British chief rabbi, asks why the Maccabees searched for the cruse of oil when there was no reason to believe that anything would have survived the Temple’s desecration by the Greeks. He says it is because the Jews “had faith that from the worst tragedy something would survive.…There are times when any other people would have given up in despair…but somehow the Jewish people did not sit and weep…they lit a light like no other in history, a light that tells us and the world of the power of the human spirit to overcome every tragedy and refuse to accept defeat.”

Snyder echoes, “We gave William the name Baruch Nissan, ‘Blessed Miracle,’ before he was sick. It’s ironic, but it’s like we knew before we knew. Like God knew we would have faith.”